Valkyrie Profile is a much loved JRPG series that started on the original PlayStation in 1999, featuring strong world-building, memorable characters and enjoyable turn-based combat. It’s been over a decade since we’ve had a Valkyrie game on console, and Valkyrie Elysium modestly attempts to reboot the franchise, with a focus on a more action-RPG style of combat that is more akin to Bayonetta or Devil May Cry than to the turn-based RPG’s of the 90s. While it mostly nails the combat, it loses almost everything else that made the Valkyrie series memorable in the first place, leaving us with a largely forgettable adventure that is a shell of its former self.

You play as the titular Valkyrie, on a mission set by her creator, the All-Father Odin, to cleanse the world of Midgar by purifying the lost souls within it. The story itself is forgettable and largely uninteresting; you chat with Odin between each mission, and then he sends you off to another area to fight through enemies, retrieving key items along the way. Characters are predictable and forgettable, though they do become more interesting towards the later stages of the game. The reveals and actual character development takes a bit too long to get going though; the stilted conversations between the cast mostly were boring and overly long, with little reason to keep engaged.

Asgard acts as your pretty-but-empty hub, where you set off on these missions in formulaic fashion. The old-school game design trappings start rearing their ugly head pretty early. There are nine chapters that you play through from this mission hub, but most of them have you retreading steps to the same areas twice in a row before moving on, taking away any majesty that might have been there. Side missions, which are collected from orbs of light that you can find during main missions, must be taken on separately, again from the hub. There’s no way of accepting a side mission and completing it while you’re already there.

“…traversal while in combat is fast and fluid, and it’s satisfying to hack through enemies…”

This would be fine enough if the environments and stages in Valkyrie Elysium were noteworthy on a visual level or filled with secrets, but sadly they’re not. Locations are decidedly sparse, with no person or object that’s particularly interesting to stumble across. They serve as large empty stages with a muted grey colour palette, designed to simply ferry you from one combat encounter to the next. You can stray off the beaten path on occasion to find a treasure chest or a Verdant Blossom (which includes a piece of lore from beings that used to inhabit the space), but other than that there isn’t a reason to do anything but smash through enemies without diversion.

Thankfully, the smashing itself is mostly a good time, with a simple but effective combat system that should at least keep you satisfied throughout Valkyrie Elysium’s 15-ish hours of story. There’s a mix of light and heavy attacks, and a Soul Chain (grappling hook) that allows you to latch onto enemies at a distance and swiftly pull yourself towards them. This means that traversal while in combat is fast and fluid, and it’s satisfying to hack through enemies, nailing them with finishing moves and using combos to great effect. 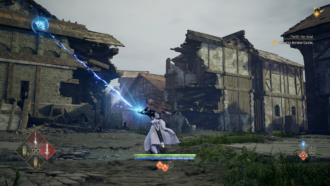 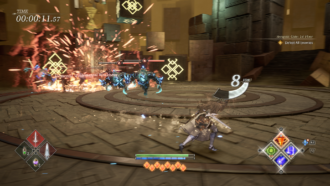 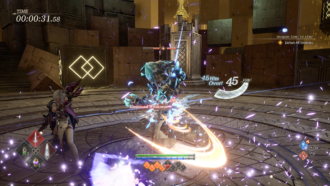 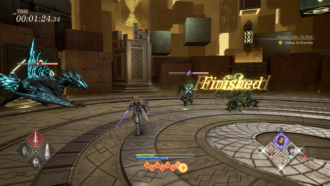 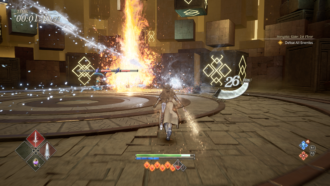 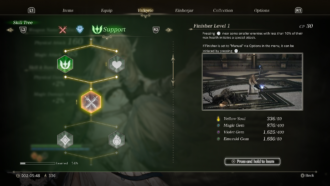 Eventually, as you upgrade Valkyrie, you’ll have access to magic powers that can also be effective, including lightning bolts (that bounce between enemies, chaining them together), giant fireballs and satisfying magic lunge attacks. What really elevates proceedings though are the Einherjars, the souls of departed champions who are summoned to fight by your side. Each one has a different elemental focus, and when summoned that element is infused into your main weapon, too. It becomes clear pretty quickly which enemies are infused with each element, so on top of your hack ‘n’ slash skills, focusing on the strengths of your Einherjars and the weaknesses of your foes becomes paramount, and is enjoyable to pull off successfully. The camera does have a mind of its own sometimes, however, often getting caught on walls and enemies alike, making things tricky to see.

Each Einherjar has their own personality, which actually adds a bit of levity to the otherwise “very serious” tone of Valkyrie Elysium. They banter amongst themselves and even have some interesting chats with Valkyrie herself about what it means to be human. They also each have their own individual side quests that can be completed to enhance their abilities, so they’re worth doing as well (although you won’t be penalised if you don’t). They are also needed to solve “puzzles”, but those puzzles are just temporary roadblocks that only have one solution: aim at it, and send an Einherjar to deal with it. That lack of challenge means the experience isn’t particularly engaging. There are some boss battles that may require your full attention, but at one point I took a 30 minute phone call during a mission, and just fell into a trance of combat while only barely paying attention to what was happening on screen, still receiving a coveted “S” ranking at the end of the level.

The upgrade system is also uninspired; you collect different kinds of coloured gems (from enemies, smashing open crates and treasure chests), and each gem is a different currency that is usable to upgrade your weapon or Valkyrie herself, with damage increase, defense and health. You’ll need more and more of these gems to move within the higher levels of these skill trees, but those rarer gems are only found in later levels, of course. It feels like a cheap way to ensure that you can’t upgrade certain abilities until you’re in later areas, gated by gems that are in huge supply. I rarely cared about what gem I was finding in the moment, just getting into a habit of checking the menu every now and then to see if an upgrade was achievable or not. Not very compelling, is it?

For what it’s worth, my particular playthrough of Valkyrie Elysium was disrupted in a large annoying way; right before the final chapter of the game, a tutorial screen popped that was impossible to get rid of, completely halting my progress. The only way to get around it was to load a previous manual save that I’d done hours prior. Considering the repetitive nature of the games combat, this almost made me want to stop playing entirely at that point, and I probably would have if I didn’t have to complete the review. I’m hoping this bug is a rare one that won’t happen often, but be aware of it and save regularly, would be my advice.

There are multiple endings that activate based on how thorough you’ve been on each map, and missions are replayable to try to get a higher ranking; additionally, some of the side missions actually do offer a good combat challenge, and feel like good bite-sized versions of the longer main missions. Enemies don’t evolve much over the course of the game, other than just throwing more of them at you in quick succession. There’s also butterflies that you can summon which lead you to your destination, but maps are mostly so linear that I didn’t need to use them unless I got turned around by the samey-looking environments. There’s nothing offensively bad about Valkyrie Elysium – it’s just bland.

Fans of the series were excited when Valkyrie Elysium was revealed, and a modern take on the loved franchise could have done it wonders. Unfortunately, the archaic level design and grubby visuals make the adventure feel like it would be more at home back on the PS3. Combat is its saving grace, dancing between combos and activating magic abilities on elemental foes in satisfying fashion. The Einherjar who fight alongside you add a nice touch, enhancing combat and adding some much-needed levity to the boring narrative. Mindless, enjoyable combat is here in spades, but it’s not enough to make Valkyrie Elysium a reboot that I’d strongly recommend to anybody.