Soccer Story is a rather charming little RPG/sports sim title by No More Robots, where you must restore the joy of soccer to a land where amateur games have been banned by the villainous Soccer Inc. Although the goofy-yet-earnest premise and vibrant world and NPCs make it delightful to initially dive into, the actual fetch quest-laden gameplay outstays its welcome, and results in an adventure that unfortunately does not live up to its potential.

Note: I will be calling the ball-kicking game that Soccer Story revolves around soccer for the remainder of this article. I know most of the world calls it football, but this game calls it soccer, so that’s what I am going with as well. Amusingly, you can actually change what characters refer to the game as in the language options menu, however the game title and in-game signs still call it soccer for the most part.

In Soccer Story, it has been one year since the Calamity, a momentous event which caused soccer to be banned outside of tournaments organised by Soccer Inc. Fortunately, your player character is chosen by a magical soccer ball to return the magic of soccer to the masses. After forming a small team comprised of your twin sibling, an old man, an individual named Tuna and a panda, you must travel across the land fighting back against Soccer Inc.’s corrupt influence and encouraging other local teams to regain their love of soccer and join your tournament. Only by winning all the regional cups can you earn the right to travel to the floating island that Soccer Inc. resides on and save soccer once and for all.

It’s a very charming premise, and the extent to which the game commits to its message of soccer being something people should enjoy, rather than something giant organisations should commercialise, is admirable. Soccer Inc. is a rather blatant analogue of the controversial soccer organisation FIFA (with Soccer Inc.’s leader, Bepp Jatter being an obvious and unflattering caricature of notorious former FIFA President Sepp Blatter), so with FIFA being in the public spotlight right now with the 2022 Qatar World Cup, it is appropriate that the game draws some attention to the alleged corruption within the organisation, albeit in a lighthearted fashion. 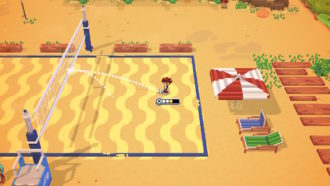 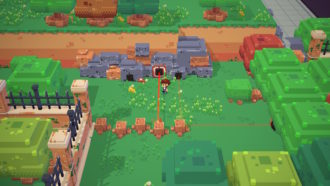 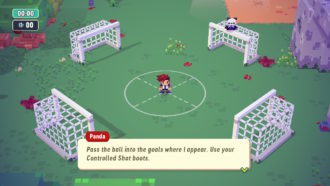 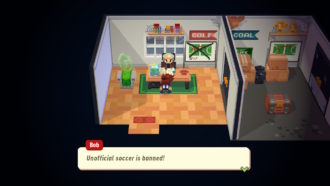 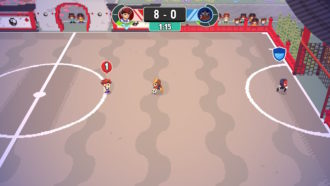 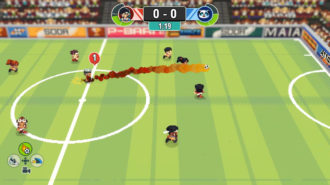 The setting of Soccer Story is also quite engaging to explore. Areas are filled with hidden targets and goals for you to kick your ball at for coins and other rewards. NPCs offer soccer-based challenges involving dribbling, racing and kicking goals, among others. It is a vibrant and reactive world, with virtually everything being affected by you kicking a ball at it, including NPCs if you want to act like a jerk. That said, considering the amount of travelling between areas you eventually need to do, some sort of fast travel system would certainly have helped.

“I don’t mind necessarily that not everything involves kicking a ball, but the quests themselves are generally either very simplistic or frustratingly vague.”

Unfortunately, after having set up a charming setting and cast, the actual gameplay of Soccer Story fails to engage quite as much. Once you have formed your team, you follow a fairly strict loop of travelling to a new location, encouraging your next opponents to reform their team by completing a bunch of fetch quests for them, beating them in a soccer match, then rinse and repeat.

The quests themselves often have nothing to do with soccer, and can involve finding and speaking with a specific NPC to sell them overpriced ice cream, fishing for treasure, or searching for very well-hidden ninjas around town. I don’t mind necessarily that not everything involves kicking a ball, but the quests themselves are generally either very simplistic or frustratingly vague. Particularly for the missions involving speaking to an NPC or locating hidden items, a more detailed quest log, or some sort of objective icon to indicate where to go, may have helped save time.

It also would help if the game was a bit more stable on the technical front. Soccer Story on the Switch is prone to crashing, particularly after the climactic soccer matches for some reason (fortunately it always saved my victory, ensuring I didn’t have to win all over again). It crashed twice in a row during the endgame epilogue, and multiple times during regular exploration. Other issues are also present, including one point where I clipped into a piranha-infested lake that I shouldn’t have had access to and almost became permanently stuck in until I clipped out again. Hopefully, patches to improve the game’s stability are planned.

I’d like to say that Soccer Story succeeds in the actual soccer, but that element is also a bit of a letdown. The soccer games are weirdly low-energy; there is no music, only mild crowd noises and the sound of the soccer ball impact. Compared to the pleasant acoustic soundtrack of the overworld, which creates a nice ambiance for the side quests and narrative scenes, it is odd that it removes this for the climactic soccer matches, causing them to feel a lot less exciting than they might have felt otherwise. They’re also quite easy, at least on the medium difficulty, possibly due to the small team and pitch size. The 1v1 matches felt especially comically one-sided.

As you progress through Soccer Story, you can upgrade your team with upgrade tokens purchased with coins found in the overworld. Annoyingly, upgrade tokens for each attribute are purchased from different towns, so if you have banked up a bunch of currency and want to buy a variety of upgrades, I hope you are looking forward to a long commute. While I did appreciate the ability to customise my team’s stats and develop them as I wanted, the lack of ability to swap out team members and choose who I wanted to include in my team felt like a missed opportunity.

In addition, while you do unlock cool special abilities, allowing you to trip over distant players or kick the ball like a meteor, these abilities are unlocked rather late in the game (with the last one unlocked right before the penultimate match). By only introducing the special abilities in the game’s second half, it doesn’t leave you too much time to use them. Introducing the crazier soccer superpowers near the beginning might have made the early levels feel more alive and set the game apart from other arcadey soccer games out there.

Once you have finished the game, you can try and complete a myriad of side quests and explore every nook and cranny of the world to fully upgrade your team. Otherwise, you can play off against your friends in up to four player local multiplayer. I enjoyed the ability to play as the story mode’s other teams in this mode, allowing you to play as a team of ghosts or shark people.

I really wanted to like Soccer Story more than I did by the end. Its quirky, soccer-filled dialogue and setting is really charming, and I had a blast kicking my soccer ball everywhere to uncover secrets. However, in trying to craft a puzzle-RPG and soccer game hybrid, Soccer Story doesn’t really succeed in either side of that equation. Zelda fans will probably be turned off by the reliance on fetch quests and simplistic puzzles. Soccer Story’s lack of intricate team management or diverse match types probably won’t appeal much to soccer game aficionados either. Soccer Story is a decent enough experience, however it is held back by the lack of a strong gameplay foundation and annoying technical issues, which may at least be ironed out in the future.