Star Ocean: The Divine Force is the latest in Square Enix and Tri-Ace’s long-running RPG franchise which combines Star Trek-esque sci-fi and fantasy. After a bit of a stumble with the divisive last game, Integrity and Faithlessness, this most recent entry is mostly a promising return to form, bringing back the dual protagonists element from the second game in the series and presenting more of an open world exploration focus. Despite some areas that could do with some improvement, Star Ocean: The Divine Force is worth checking out for JPRG fans.

The plot of Star Ocean: The Divine Force begins with space courier Raymond crash landing on the underdeveloped planet of Aster IV after his ship is shot down. Stranded from his crew, he teams up with the rebellious princess Laeticia and her surly retainer Albaird as he aids them in their quest to recruit a mysterious magic-wielding semiomancer in favour of finding his missing crewmembers. Further complications develop as the party encounter other spacefarers on Aster IV, who are after Raymond’s mysterious cargo, a flying robot called DUMA.

At the start of the game, you are given the choice between Raymond or Laeticia as the main protagonist. The character you pick must remain in your party at all times, and although events mostly play out the same for the first few hours, things diverge much more later on when Laeticia and Raymond are separated, leading to mutually exclusive scenes, dungeons and boss fights. I found this to be quite a compelling storytelling device, with each character having substantial off-screen adventures which can be experienced on a second playthrough as the other protagonist. I picked Laeticia, whose story delves more into the politics of Aster IV and her efforts to save her kingdom from a deadly disease outbreak and invasion from a neighbouring empire. As such, I am curious what kind of adventures I missed from Raymond’s perspective when their paths diverged, and am interested in a second playthrough someday.

As with many JRPG plots, Star Ocean: The Divine Force’s narrative is a bit of a slow burn. It takes a good 10 hours for the majority of your party to form and for the plot to really grow in scale. The characters, while not super deep, are generally entertaining and have a fun rapport with each other, particularly if you hunt down the incredibly well-hidden Private Action scenes which flesh out their personalities a bit. 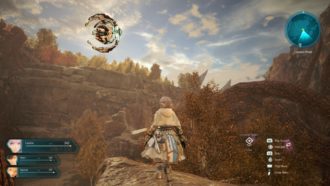 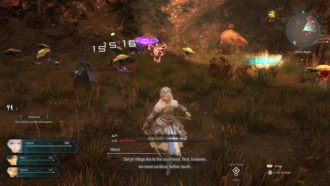 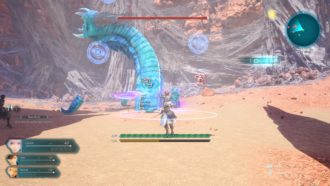 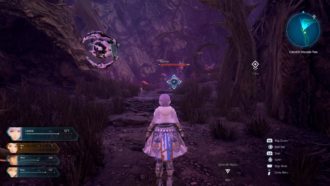 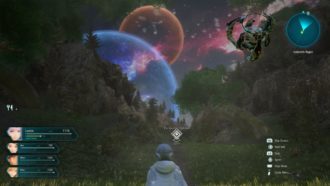 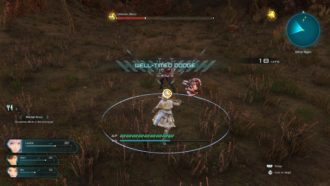 One major addition to Star Ocean: The Divine Force is the expanded open world, with cities and towns separated by huge Xenoblade Chronicles-esque open areas. However, it doesn’t quite land that sense of vastness that the Xenoblade Chronicles games have excelled at. In part, this is because the open areas are largely flat, unpopulated and lacking in memorable landmarks or secrets, making them all feel quite bland. The other is because you get the ability to soar through the air with DUMA almost immediately, ensuring that you view the open area almost exclusively from above due to that being the fastest way to get around. As a result, the trip between settlements often feels like dull busywork, fortunately somewhat curtailed by the addition of a fast-travel system.

One other substantial influence from Xenoblade Chronicles is the random encounters, or lack thereof. For the first time in the series, all fights in Star Ocean: The Divine Force happen in the overworld or dungeon, rather than a special zone only for the fight. I appreciated this a lot as a method of keeping the pacing up, and adding new dimensions to how fights are approached. With the new mobility options afforded by DUMA, the player can launch surprise attacks and even bypass enemy mobs entirely by flying right past them like a strangely-dressed Superman. Escaping encounters is also very straightforward, being as simply as leaving the clearly-marked enemy aggro zone.

“The system of designing custom combos and crafting your ideal fighter is surprisingly intuitive, with chaining together the right moves taking some experimentation.”

The combat is mostly functional, keeping most of the strengths, and some of the weaknesses, of previous Star Ocean games. As with previous titles, combat in Star Ocean: The Divine Force is in real time, with you controlling one character directly, and up to three party members controlled by AI. You can switch between characters with the D-pad, and assign different abilities and combos to the face buttons.

The system of designing custom combos and crafting your ideal fighter is surprisingly intuitive, with chaining together the right moves taking some experimentation. More useful moves can be bound to holding down a button instead of pressing it a certain number of times. The Blindside mechanic introduced in Star Ocean: The Last Hope returns, allowing players to stun enemies by flying around them with DUMA and attacking them from their blind spot.

Unfortunately the combat suffers from much of the same problems that many action games with AI-controlled party members have, which is that directing your party members feels about as manageable as herding cats. Your ability to manage your allies is reduced to ordering them to attack who you’re attacking, attack other enemies, or “use their best judgement”. This is usually fine for most fights, however my inability to prevent the squishy healer from remaining in attack range of some deadly bosses caused some frustration, forcing me to switch to controlling the healer to make sure she stays alive to heal the party while the AI did the actual fighting for me.

Star Ocean: The Divine Force’s user interface and menu navigation could also do with some work. The game has some of the worst text I have seen, with subtitles and menu text being unreadably small on my television, and not aided by any sort of background or shading that would make them easier to distinguish. When sifting through menus to exchange equipment and level up my party, I had to get up from my couch and squint at the screen just to make out the flavour text. I can’t think of any reason for the small text; it’s certainly not lack of screen real estate. For players with visual impairments, this is quite a roadblock, and an unnecessary one at that.

The process of levelling up is also quite laborious. As you level up, you gain SP. which can be used to unlock new active and passive abilities and upgrade your existing skills. To unlock new abilities, you spend SP on the skill tree to unlock the next node. The game absolutely showers you with SP, and each node on the tree is quite cheap, and can only be unlocked one at a time. This means the process of upgrading your characters post-level up takes several minutes as you unlock another HP+2% node, listen to the jingle and the pop-up box, and then move onto the next one. Some ability to mass-unlock nodes, or just have the option of AI spending the SP for you, would have been welcome streamlining.

“The cast fall deep into the uncanny valley rather often, with their stiff, porcelain faces and awkward body language.”

Fortunately, the world outside the menu screen in Star Ocean: The Divine Force is generally nice to look at. Despite the lack of memorable landmarks in the overworld, Aster IV remains a beautiful setting to behold, particularly its beautiful and alien sky.

Sadly, the same cannot be said of its population, who remain a prime example of how not to depict anime character proportions in 3D. The cast fall deep into the uncanny valley rather often, with their stiff, porcelain faces and awkward body language. It’s definitely a more-is-less situation, where something like the screen-hogging 2D portraits of the Persona series would have conveyed the characters’ personalities just as well without relying on unrefined 3D character models.

Star Ocean: The Divine Force will likely win back fans unimpressed with Star Ocean: Integrity and Faithlessness. With its fun cast and expansive narrative, I found the game easy to get invested in, despite the predictably tropey JRPG melodrama. The mobility upgrades and combat overhauls make it the most fun Star Ocean game I have played yet. It’s a shame that the awkward character models, ridiculously small text size and sluggish level up mechanics may prove a roadblock for some. If you’re not already a Star Ocean or JRPG fan, Star Ocean: The Divine Force might not be that easy to get into. However, if you are willing to overlook some of its shortcomings, and want a fantasy action-RPG with a sci-fi twist, it is worth checking out.