Tactics Ogre: Reborn is the first game in the Ogre Battle series to release in over a decade. Reborn serves as a remaster of Tactics: Ogre Let Us Cling Together, a 2010 PSP remake of the 1995 SNES game of the same name. A long and storied legacy has come from the series, which was an early frontrunner for the tactics genre. Reborn is as such, a loyal recreation of those early, tough and minimalistic genre experiences. Even if that comes with some hard truths and imperfect quality-of-life additions.

Reborn follows the journey of Denam and his sister Catiua. Losing their family and many of their hometown, they’re sent on a spiraling journey amidst a deep and fantastical conflict. In order to survive, they make nice with some royals and enemies with others. Creating an army of their own with their friend Vyce, the two set out on a quest to find the reason behind their home’s destruction — and maybe even put an end to the war in the process.

I thought I knew what I was getting into following my preview of Tactics Ogre: Reborn. Little did I know how ill-prepared I was. Stakes are immensely high throughout your journey, and character permadeath cruelly waits to come for you. Characters I expected to be crucial to the plot I soon found killed off early in the game. Mechanically, this does a really good job of upholding the brutal themes of a story that can be vague from time to time.

The story in Tactics Ogre: Reborn can branch, depending on the choices you make in key moments of the story. Side-mission opportunities can be missed entirely should a character die before their moment to shine. Yet another example of how high such stakes are. This branching will encourage replayability for extreme players and that’s exciting. However, when the game is already a tough, trying, uphill battle, I cannot foresee a second playthrough.

“…Playing through Reborn, there’s absolutely that feeling of majesty.”

No matter how hard they might try, the game is a bit guilty of exposition dumping with a large sprinkling of proper nouns to boot. There did come many a time when I would enter a battle, pursuing a target for reasons I couldn’t quite recall. Still, when these tense exchanges land, they really land. There are some killer, palpable lines that are memorable far after you put the controller down. Motivations expressed are eloquent and captivating, often seeing our hero Denam go one-on-one with party members in moments of confession. Backstabbings will occur. Political intrigue remains throughout the cutscenes that play in-between battles.

Even if it distracts you with flowery, abstract language, Tactics Ogre: Reborn is such a joyous and crucial history lesson in both early fantasy video game writing and Square Enix’s rich, fabled existence. Being such a current and eager Final Fantasy XIV goer myself, it’s rewarding and intriguing stepping into Reborn, something producer and director Yoshi-P cites as a heavy inspiration. Playing through Reborn, there’s absolutely that feeling of majesty that has informed many a predecessor, direct or otherwise. 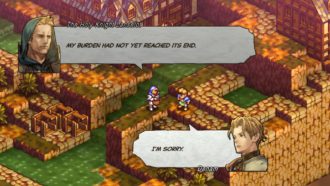 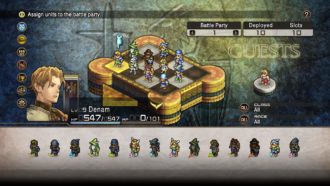 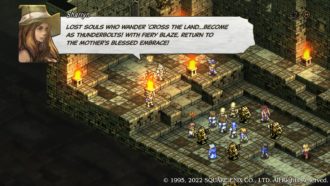 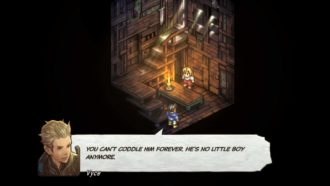 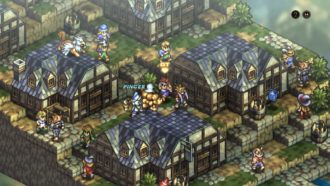 Reworking the nitty gritty and repainting that coat of paint

When remastering a game as precious as Tactics Ogre, there’s always the question of how to a tee you make this new version. Reborn definitely strays more on the side of staying true. The experience is largely the same as what you may have played prior in its 2010 version. Leading up to the release, keen-eyed fans pointed out that the up-resing of the game looks to have muddied and blurred some of the character design. That remains present in the final product, which will certainly disappoint some. The original had such crisp and tidy pixel work that helped realise the cast that little bit more and that omission is noticeable.

Fans will otherwise be pleased to know that Reborn is exactly what you’d expect, with some touch-ups here or there. Re-recorded live music for the soundtrack makes for a further boisterous effect and mood when in battle. Plenty of quality-of-life improvements are also present to mainline the experience much more. While each class may only equip certain equipment (a cleric can only equip healing spells, a knight cannot equip a bow etc), level requirements for equipment no longer exist and you may equip an item the moment you stumble upon it. Training battles have been added as a means of levelling up your units between main missions without the risk of permadeath, while random encounters are out entirely. As someone that can get quite tested and impatient from time to time with tactics games, I’m thrilled to hear this is the version I’m playing.

Shops and menus where you’ll hire new units and purchase new gear for your team are tidied up a lot more now too, a welcome addition. I still can’t help but feel that some smaller streamlining options should’ve been offered here. When you can hire more than a dozen units at any given time, an ‘equip best level gear for x unit’ would’ve gone a big way in making the min-maxing experience all that smoother. Perhaps one of the more quintessential features, as with any remastering of an older game, is the fast-forward function to make battles and their otherwise slow animations go that much quicker, wasting less of your time.

With how much praise I can give the quality of life additions, I can identify other sore absences. Tactics Ogre: Reborn is still the fantastically difficult game it’s always been. That will be wonderful news for those wanting an authentic experience, but players eager to try out this genre giant will be left in the dust. No concessions are made in easier difficulty options. There are stretches where both saving opportunities and shops are fewer and farther between, hurting crucial progression. On a few occasions, I had to lose quite a few hours of progress simply to restock and preserve items from several missions ago just for a better chance at survival.

It’s here that I must disclose that after about forty hours and several difficulty walls, I had to throw in the towel for now with Tactics Ogre: Reborn, just shy of the second last chapter’s conclusion. There are just times that the game works too much against you, no matter how much you want to experience its greatness. A big example of this is the new addition of the party level where, depending on where you are in the story, the party’s level will cap. The idea here is you don’t spend plenty of time grinding to be over-levelled come to a mission. However, my absolute favourite part of tactics games is working hard to find ways to break those confines and instead twist it in your favour. The fact I don’t even have that option became annoying, something I’m confident I’m not alone in. Coming off the recent Mario + Rabbids Sparks of Hope, a tactics game flourishing and bursting with opportunities to have creative solutions, it’s certainly a harsh step back to visit Tactics Ogre.

Taming monsters and packing a punch

All those issues aside, Tactics Ogre: Reborn still holds a candle to the tactics games we see today. Everything you know and love about the genre? It more or less started here. Environments, while offering some verticality and alternate paths to flank your foes, are mostly minimalistic. What you see is what you get. I quite enjoyed going back to this approach in level design. A lot of the requirement to make it through a given fight isn’t necessarily coming from the right spot, but just knowing your units and the tools they have at their disposal intimately.

These tools are quite diverse. Finishing moves are powerful abilities that can really doll out the damage such as devastating hammer attacks, used by MP. These are separate from the typical spells you’ll also be able to use. As expected, having a varied cast of classes going into a battle is of utmost importance in taking control of the battlefield. Dragoons for instance have an incredibly overpowered ability that adds exponential damage to the blows you doll out to meaty beasts such as dragons or Gryphons. Abilities that let you tame monsters or convince an enemy unit to join your team bring levity in one less target to deal with. Some of my most crucial party members actually became the more lightweight magicians, suited up with spells such as Deadshot, a long-range attack that sends a powerful trajectory of wind an enemy’s way.

With the better part of two dozen classes and sub-classes (along with beasts) to have under your battalion’s belt. The possibility of different party makeup and skills is vast. For this alone, Tactics Ogre: Reborn still remains one of the absolute best games to get stuck into the granular levelling and speccing you so desire.

My favourite risk vs reward comes in the form of buff cards that you can collect throughout the battlefield. Every so often these cards pop up on tiles and can add more physical or magic damage, quicker MP restoration, and so on. Four of these can be stacked, and are well worth going out of your way to do, as I often found that a little bit of extra damage was often what saved my hide. That goes even deeper if you find yourself on a clever footing to knock an enemy into the debuff card, lessening their impact on you. Of course, it’s paramount to be even more conscious of your surroundings when seeking these out as it will often put you out in the open.

Whether it’s deep within an underground channel of sewers, between regal castle walls, or out on rain-drenched plains, Tactics Ogre: Reborn has plenty of breadth in its environments. Accompanying this is combatant figures that will yell back at you through clashes of iron and silver, desperate and with their own needs and wants in the conflict. An entirely rich world is created here with this, complementing the combat and tactical nature beautifully. That feeling of magical importance never lets up.

Tactics Ogre: Reborn is a very good remaster of an absolute classic. So many lines in-game are raw and palpable and feel like utter poetry, leaving me perplexed at how they could be written by another human. Re-recorded tracks add to the grim but boisterous realities of the universe’s war. Plenty of granular investment and min-maxing is on offer to create a timeless and incredibly realised tactical combat experience. However, I can’t help but sometimes want more from its vague storytelling and opportunities for more quality-of-life improvements. Concessions absolutely could’ve been made for more difficulty and saving options, doing away with the feeling of hitting roadblocks. Still, this is a genre experience that’s as true as they come. Tactics Ogre has once more cemented itself as one of the tactics giants, and a bloody momentous one at that.