Yomawari: Lost in the Dark Review – Yōkai around every corner

Spooky season had just arrived and, as a resident scaredy cat, I thought it might be fun to dip my feet into a relatively mild horror game. Yomawari: Lost in the Dark reminded me of the classic RPG horror games I played as a teen—Corpse Party, Mad Father, Ib, The Witch’s House—so I thought ‘I can handle this, right?’ No, I was wrong, because for most of the 10-hour playthrough of Yomawari: Lost in the Dark, I was chased by terrifying spirits, jump scared by scarecrows, Slenderman’s and cursed dolls, and on the verge of tears every time my flashlight ran out.

Yomawari: Lost in the Dark is the newest 2D horror game in the Yomawari franchise that is not to be underestimated. Developed by Nippon Ichi Software and published by NIS America, Lost in the Dark will have amateur horror game players terrified but also unable to put the game down because of the intriguing narrative that follows it.

As a newcomer to the franchise, I was surprised to find out that each Yomawari game is a standalone experience within the same universe. Yomawari: Lost in the Dark follows a young girl, who, after a brutal bullying sequence in the introduction, looks up at the sky from the school rooftop and suddenly finds herself in a cursed alternate world. The beautiful and bright town she once lived in is now shrouded by darkness and overcome by dreadful spirits. What’s worse is the girl has been cursed. And the only way to break it is by finding her lost memories scattered across the town.

Throwing me into the deep end straight away with only my flashlight and a single memory to guide me; Yomawari: Lost in the Dark wants you to know that you’re on your own. I had to just start exploring the vast town crawling with evil spirits. There are no quest markers, the map is blank, and only occasionally are there map signages I could look at to try and get a sense of my surroundings. It was clear that the game takes a non-linear and semi-open-world approach to gameplay. And in a horror game, that is powerful.

Without a sense of direction, stepping out into a world with monsters that could easily kill me suddenly became more daunting. Additionally, Yomawari: Lost in the Dark has no auto-save function. This means I had to find Jizō Bosatsu shrines (my glorious saves) placed around the town to save. In a way, this is how Yomawari: Lost in the Dark creates tension because death is unforgiving. So, while I’m running for my life from a spirit, because I don’t remember the last time I saved, and a jump scare bursts onto the screen, it is very effective.

Yomawari: Lost in the Dark leans heavily into the now common survival-horror mechanics that I’ve come to both love and hate… stealth. The young girl cannot fight the spirits that plague her, instead, she has three options: to run, to sneak, or to close her eyes. The last mechanic is an interesting addition, because in Yomawari, if the girl doesn’t look the spirits in the eye, they will pay her no heed (mostly). The screen will turn black and red clouds will appear instead of spirits, which the girl can manoeuvre through to safety. And all the while a loud heartbeat blares into your headset reminding you that death is imminent if you open your eyes.

“Full of symbols and imagery, Yomawari: Lost in the Dark allows players to look for deeper lore in the world.”

Some spirits in the game are not affected by the shut-eye tactic, which meant I had to master the art of frantic running and eye-closing until I was safe. The constant change in spirit type kept the gameplay tense because I had to react so quickly to different scenarios. However, on the opposing side, it also meant trial and error was crucial to exploring certain areas. And that became tedious and frustrating because of how punishing death was.

Eventually, about halfway through the game, I understood the mechanics well enough that it was no longer difficult. And that is when the cracks of Yomawari: Lost in the Dark started to show. Once I opened up most of the map and understood the mechanics, death didn’t seem as scary. And the glue that kept the horror together started to break. You run, you close your eyes, you pick up an object; rinse and repeat for every boss fight and Yomawari: Lost in the Dark becomes monotonous. The game struggles to evolve over the ten-hour playtime. The frightening magic of the first 5 hours is replaced by dismay for having to repeat the same mechanic over and over.

Despite repetitive mechanics, Yomawari: Lost in the Dark is still a wonderful world to explore. As each area is brought to life through the Japanese folklore subtly woven into it.

During my playthrough, I arrived at an ominous cave with a talisman above it. To unlock it, I had to walk through a spirit-infested mountain field placing scarecrows on shrines. Next to them were hundreds of stacked stones that toppled when I did. Ominous, maybe? In Japanese Folklore, stacked stones are created by the souls of children who have died before their parents. Every day, yōkai (demons) knock down these stones in hopes of hunting the spirited children. In Yomawari: Lost in the Dark, the Yōkai are represented by scarecrows, who break the remaining stacked stones once the cave is unlocked. And you can guess what happens next… 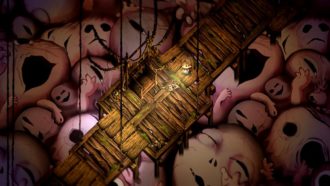 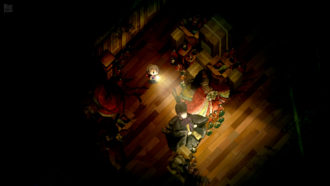 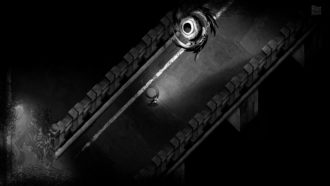 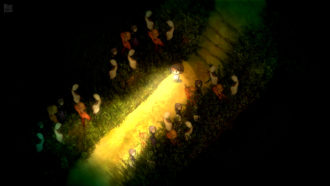 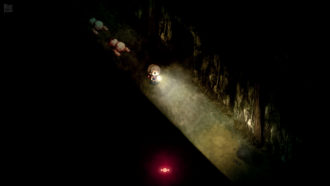 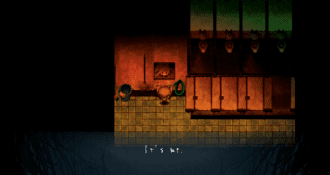 Full of symbols and imagery, Yomawari: Lost in the Dark allows players to look for deeper lore in the world. There are hints around every corner, and the consistent mystery keeps you engaged.

Take the mansion in the bamboo forest, for instance. There are Hina dolls scattered throughout, which, traditionally, were displayed by families of young girls to ward off evil spirits. Yet in another room of the mansion are regular ningyō dolls, which, in Japanese Folklore, can become ensouled. The main boss within the mansion is a child doll that, I can guess, died in the mansion, was ensnared by a doll, and forced to wander its halls for eternity.

“Based in a traditional rural Japanese town, Yomawari: Lost in the Dark imbues grotesque body horror and cosmic surrealism into its setting.”

Yomawari: Lost in the Dark is at its best when it allows players to put the story together themselves. And for the most part, this is the case. That is until I reached the final act. Without trying to spoil anything, the game enters a downward spiral that undoes a lot of what came before it. Immediately following this reveal is an hour-long exposition dump on the true narrative. The previous repour I had built with the game, thanking it for trusting my intelligence, was spoiled in that last hour.

Despite any shortcomings, the game is still worth picking, if not for the visuals alone. Based in a traditional rural Japanese town, Yomawari: Lost in the Dark imbues grotesque body horror and cosmic surrealism into its setting. If it’s walking around the dimly lit silent town where disfigured folkloric monsters lie in wait or creeping through a blood-filled school with spirits whispering ‘let’s play’ from down the hall, you will be shocked, and sometimes disgusted, by what you see. And when you think you’ve seen it all, you haven’t, because each sub-area does a magnificent job of rebuilding tension, dropping hints of its monsters and reeling you back in with the quiet yet ominous atmosphere.

Safe to say, when I reached the ending credits of Yomawari: Lost in the Dark, I had aged 10 years. Not only because of the frustrating late game, but the scares, tension, and constant fear kept me gripped to the end. Yes, the mechanics get repetitive and the jump scares old, but the amount of artistry that went into creating the world, monsters, and tone deserve praise.

Yomawari: Lost in the Dark is perfect for amateur-level horror players wanting to dip their feet into a game scarier than what they’re used to. The dim lighting, disfigured monsters, stealth mechanics, and creepy atmosphere—all wrapped up in a beautiful (but really terrifying) 2D world—will be all the training you need to take on even scarier games. And if horror doesn’t phase you, then the well-crafted and deeply folkloric setting will reel you in. Be warned though, the final act is both monotonous and disappointing.