Taking inspiration from a loved childhood TV mascot and inverting that friendly face into something much more horrifying, Choo-Choo Charles embraces its silly yet strangely enticing premise. Solo developer Gavin Eisenbeisz who develops under the studio name Two Star Games certainly could not have expected the attention this project was going to get in the lead-up to release. Describing his own game as “a big dumb meme game“, this open-world horror release certainly lives up to its description. Though possibly a victim of its own success, Choo-Choo Charles also falls short of expectations with just a few too many clumsy ideas and a lack of scope.

The game premise is pretty simple. You play as a new arrival on an island terrorised by a sentient, blood-thirsty, spider train by the name of Charles. An open world with train tracks snaking from one side to the other becomes your battlefield as you move your own train through the grim forests and past small homesteads. All played from the first-person perspective, players will control their train with the use of three levers (forward, stationary, or backward), though they can also disembark off their train and explore by foot. NPCs are scattered around the island who you can talk to and do sidequests for, though you always have to be wary of Charles who freely roams the island and will attack when near.

As a general premise, Choo-Choo Charles is really engaging—surprisingly so. There’s a bit of open-world horror DNA in there, taking inspiration from titles like Slender: The Eight Pages, though with a bit more aspiration to create something bigger. The animation and design of Charles himself are top-notch and really give this game an edge in trailers. Chase sequences where Charles pursues the player are kind of the main selling point here. Yes, there’s definitely an element of meme game or streamer bait about the whole thing, though that angle also feels like it has been deliberately embraced with a level of self-awareness that simply adds to the charm. At a fairly short runtime of 2-3 hours, Choo-Choo Charles is definitely a bit of campy fun, though in the grand scheme of things, it admittedly falters in too many obvious ways to be looked at as a horror mainstay.

“Choo-Choo Charles is definitely a bit of campy fun, though… it admittedly faulters in too many obvious ways to be looked at as a horror mainstay.”

Narratively the game tries to keep pace but struggles somewhat in its tone. The idea is ludicrous and we all know it, though explanations and backstories aren’t always told with the amount of levity required. There’s a cult-like villainous group who are looking to defend Charles from your plans to take him down. Flavour text of Charles’ origin and the cult’s motivation can be found scattered around via notes, though it’s never really engaging enough to feel warranted. Other NPCs range from helpful to frightened with a full cast of voice actors doing an adequate job of giving these characters personality. The problem with a game like Choo-Choo Charles though is that once that NPC’s sidequest is done, you instantly move on, never giving these characters enough screen time to form attachments. One pickle-obsessed character falls too far into the meme side of things, proving that even when the game doesn’t take itself too seriously, it still struggles to find a comfortable tone.

Charles himself is very well animated but the design and animation detail of the human NPCs doesn’t keep to the same standard. These characters talk to you but won’t move their mouth, making the experience feel a little unfinished. The quests these characters send you on often fall into fetch quest clichés where simply heading to a nearby point on a map and returning is usually good enough. There’s a repetition to NPC questing that isn’t helped by the fact that you’re literally on rails. 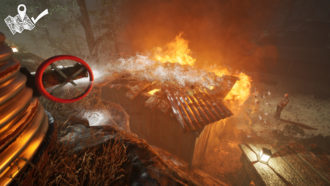 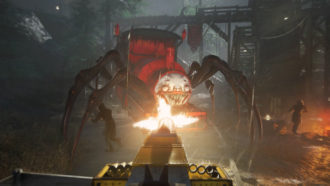 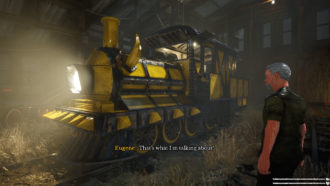 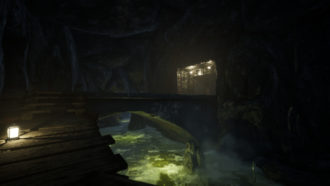 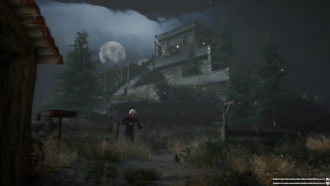 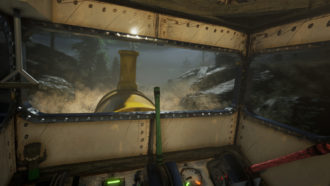 A large part of the game’s questing involves collecting three key items used to lure Charles into a final fight. These items are guarded by hostile, shotgun-wielding foes in caves underground. It’s a good reason to hop off your train and move about on foot, mixing up that gameplay repetition. Unfortunately these moments are the weakest in the game, with poorly telegraphed detection radiuses, a lack of meaningful stealth mechanics, and goofy artificial intelligence. These scenarios can be resolved by sprinting in and past NPCs who shoot at you and chase you. Your health bar and health regeneration are just a bit too forgiving for these threats to be treated with any further caution.

Where Choo-Choo Charles really does shine is in some of the more creative side-questing. One specific moment was borrowed from the aforementioned Slender: The Eight Pages and was likely the spookiest part of the entire game. Chased by a spirit that’s not Charles, a new kind of tension was felt here that was different from the norm. Another moment had you avoiding a water monster that gave an equally enjoyable respite from the typical gameplay loop. Had Choo-Choo Charles been filled with more creative content ideas like these, I could see the game as a whole being much better received.

“Had Choo-Choo Charles been filled with more creative content ideas… I could see the game as a whole being much better received. “

When on foot you’ll also notice collectible scrap on the ground that can be used to upgrade your train. Extra speed, extra defence, and extra firepower will help for any future Charles-related pursuit sequences. These bits of scrap encourage more on-foot exploration, which is good, though it once again proves to be a bit too forgiving. Scrap is found everywhere and in abundance. Without really exploring too much, I had already maxed out all of my upgrade options long before the final fight. Without that incentive for further advancements, my motivation to go off the beaten path was severely reduced. You also begin to realise that exploration by foot is seemingly safer than movement by train. Whilst Charles does have some randomisation to his movements and attacks, it always only seems to happen when you’re on your train. Once that lesson was learned, tension was lost in other gameplay moments.

The pursuit sequences themselves are lovingly visualised but perhaps a little too simplistic. You’ll use a mounted weapon (which you collect different varieties of during the game) to fight off Charles as he unnervingly scuttles toward you. Do enough damage and eventually Charles will run away to recover. These chase sequences definitely get the heart pumping but they’re the same each time, reducing the impact slightly each time you experience it. Guns will overheat as you shoot and will obviously need to be aimed, though that’s about the extent of what you have to pay attention to during these moments. Damage to the train can be repaired using scrap and taking too much damage will simply reset the game. Death on foot works similarly, with respawns costing you some scrap but not setting your journey back.

This all culminates in one final fight with Charles as the game comes to its climactic end which I’ll avoid commenting on with any depth in fear of spoiling something. It’s a decent if expected way to wrap things up but it certainly does the job of tying a bow around the entire unsettling experience.

Undoubtedly fun for a fright night with friends or a YouTube reaction video, Choo-Choo Charles will find its place comfortably as a not-so-serious meme game with some good horror ideas. There’s a charm to the whole experience supported by the fact that its short runtime means it never overstays its welcome. However, the game’s shortcomings are simply too obvious to overlook. Requiring more polish, depth, and variety, Choo-Choo Charles doesn’t have the longevity needed to be anything more than a fleeting piece of sharable internet entertainment.