Floodland is a new post-apocalyptic civilisation simulator and city builder in the vein of Frostpunk and Endzone. You can probably guess from the name, this game’s apocalypse was a wet one — a natural disaster described only as ‘The Event’ has flooded the globe, leaving only a few straggling groups alive. You control a clan of these survivors as they try to rebuild a new world while avoiding the mistakes of the Old World. Can you lead them to a better future? Maybe, if you can wade through some annoyances to get to the other side.

Floodland is a single-player-only experience with a single scenario, in which you need to restore and re-power an energy generator to give your budding society a chance of rebuilding society. It starts strong, with an interesting premise, a clear beginning tutorial, and base game mechanics that are tried-and-true in the simulation genre. Its art style and sad country music set the mood for the rebirth of humanity — somber and down to earth, but with a spark of hope shining through. You will start with just 10 people, but will quickly find more survivors to expand your colony with food production, industry, and scientific research to get humanity back on its feet. It’s quite challenging, and I expect that it will take a fair few attempts before you can successfully clear the scenario.

the minute-to-minute gameplay loop is quite satisfying for any micro-management lover. There is a tonne of different materials you’ll need to keep on top of, as well as manage food production and exploration. It’s easy to find building materials and food locally, but it’s just as easy to strip the land of resources faster than it can replenish itself, so you have to find the perfect balance if your colony is to last. You also need to do more than a bit of urban planning, as land space is in very short supply after the disastrous flood. What land is left above the water’s surface is littered with bulky ruins that you will need to work around while you don’t have the technology to demolish them. These challenges feel natural to the scenario and it’s very satisfying when you can create a functional community despite them.

By searching the countless ruins that pepper the landscape and the surrounding islands, you’ll slowly expand your world, find more survivors, and find relics from the world before the flood. You can research the relics to generate science, which unlocks various advancements in a very large Technology tree.

Every so often, an event will occur that requires your attention. You’ll be prompted to make a decision that you think is appropriate, which may have consequences down the line. They are random, although there doesn’t seem to be a large pool of them. I encountered the same event at different points across my first few games.

Upon starting a new game, you choose from a selection of Clans to start with, each with its own ideals and hopes for its new society, and each one comes with its own gameplay advantages. I say ‘start with’ because you will quickly find and assimilate the other Clans into your colony. It’s unavoidable, which makes it annoying if you are not ready to start babysitting another clan’s sensibilities — but more on that later.

Each Clan has its own values, which is a great idea for worldbuilding, but is a chore in execution. Your clan does not act like a collective of individuals but like a single hive mind. During random events, your clan will tell you if they favour one of the options over another, and it seems to be unanimous. Your entire clan is united in their hatred of organised sports or their investment in returning a lost doll to its owner. 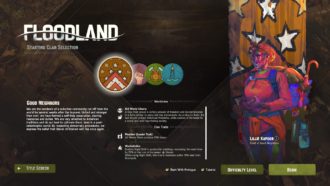 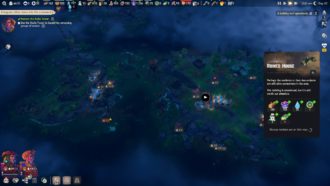 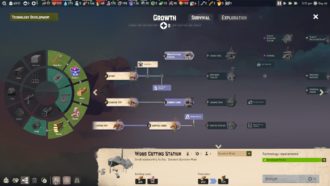 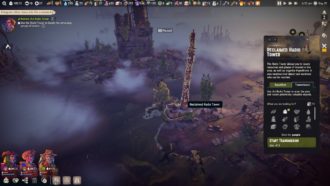 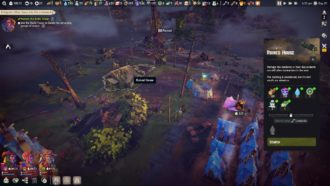 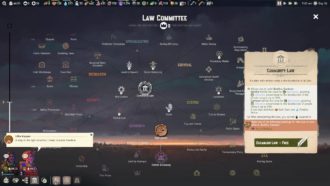 I set out on what would turn out to be the first of many attempts, and thoroughly enjoyed what I saw. Events and characters seemed genuinely varied and random, and I enjoyed exploring the randomised surrounding islands, planning ahead in my mind the industries that I would want to build on each one. This never came to fruition, though, as an unfortunate infestation of killer fish decimated my fishing industry, leading to a slow starvation for my colony that I just could not recover from.

Fair enough, I thought. I have to be more prepared for unexpected emergencies. I tried again, and got farther this time. Everything was great, I was enjoying building my colony and enjoying the melancholic atmosphere of the flooded world. But then it all came crashing down when I met another rival clan, and my fun evaporated.

One of Floodland’s most prevalent features is the multiple clans that share the flooded globe. With the old world’s government now nothing more than a memory, each group of survivors has developed its own beliefs and ideals. Inevitably though, as each group expands, they will encounter one another and assimilate. The benefits and challenges this presents are a big part of Floodland, but not one that is implemented very well, and is far too often a run killer. And unlike an occurrence of killer fish, it’s not for reasons that make sense.

Your peaceful colony will start to spiral downhill as soon as you integrate a rival clan. relations between the two clans will begin to deteriorate almost immediately, even if your two clans share most of your core beliefs and values. There is nothing to be done about this until you unlock the ability to create and write laws, after which you can finally start constructing buildings that reduce unrest among your people.

“Your peaceful colony will start to spiral downhill as soon as you integrate a rival clan.”

Before, when a random event prompted you to choose a course of action, you could safely pick the option that your people were happiest with, and go on your merry way. Now with another clan, there is finally some split opinion about what to do, but now picking one option over the other is bound to generate a tonne of unrest in the other clan. With a steady supply of unrest from clan relations and no way to mitigate it, you’re done for unless you can churn through quest missions until the game deigns to allow you to write laws.

In an example of how disastrous this is, in one playthrough I encountered a rival clan extremely early on, and had no choice but to let them into my fold. True to form, relations between the two clans started to deteriorate immediately, with the game “helpfully” spamming me with notifications about this, despite the fact I could do nothing about it. The Clans menu told me that the deterioration was because the two clans were not interacting with each other enough in recreation buildings. At this early stage, I had not even been introduced to recreation buildings as a concept, let alone have any way of building them, as that ability only comes after writing your first law.

Alas, that particular run ended before I ever got the chance to build one, as all of the unrest I had accrued resulted in a crime wave that decimated my food and water stocks due to theft, and we all died of starvation… again. Great!

I’m tempted to say that I was missing something obvious, but nothing the Clans mechanic introduces did anything but annoy me. The issues compound with each new Clan you find, making the late game more of a chore than ever, which is a crying shame considering how much fun I was having in the early game.

It overshadowed everything and made my other issues with the game all the worse. The concept is not inherently a bad one, but it needs a major rework before it’s going to live up to the rest of the game. If you are a fan of management sim it may still be worth a look, but otherwise, I recommend checking back later for any potential content patches and updates.

Floodland has a lot of great ideas and an addicting gameplay loop, but its Clan mechanics quickly suck any fun out of a game as soon it rears its ugly head. With only one scenario to play and no customisation options for these clans, it’s all too easy to suffer a slow decline for reasons that don’t feel like your fault. With such a major mechanic feeling so flawed, it’s hard not to feel like Floodland has taken a wrong turn at the last minute. For such a solid base, it’s a real shame.