As far as genre mashups go, Metroidvanias and Souls-likes are often a match made in heaven. Ghost Song, one of the newest kids on the block, attempts just this blend. An atmospheric and melancholic journey through an obtuse narrative, your time on an alien planet will leave you questioning more than just your purpose there. Originally beginning development in 2013 before receiving over US $54,000 from a Kickstarter campaign, Ghost Song has come a long way from the game pitched on the crowdfunding site. After almost 10 years, it’s finally releasing, having also secured a spot on Xbox Game Pass. Check the trailer out below!

Metroidvania’s are a platformer genre reliant on the player exploring an unlockable map as you gain abilities that allow you to traverse more of the world. Knowing that Ghost Song was also drawing inspiration from the Souls series, it was worrying that I could potentially be in for a really tough time with this game. In the beginning, this did seem like the case. No matter which way I ventured from the wreckage you awaken in, it seemed like the difficulty was dialled to ten. Not only was I learning the game’s controls but I was also seemingly being punished for not knowing where I should venture to and how to proceed.

In Ghost Song you play as an awakened Deadsuit, desperately searching for answers as you explore a desolate moon. The player character is a female robotic suit known only as the Deadsuit, or at least that’s how she refers to herself – armed in the beginning with a sword and an arm blaster. Along the way, you meet a roster of intriguing NPCs, murderous creatures, and all manner of other oddities in the world just waiting to be found. As you explore the moon you unlock new abilities and weapon configurations that will come in handy as you come up against fearsome bosses lurking throughout the world. The gameplay is a mixture of side-scrolling platforming and combat with the Deadsuit’s attack abilities.

Through trial and error and eventually caution, one does begin to venture deeper and it’s then that Ghost Song really comes into its own. While it is a difficult game, I see the Souls inspiration as being more of a feeling the game brings. Much of the game carries this weight of emotion, something not unlike sadness but not quite despair. And that’s before you take on any of the bosses which feel like where the tone matches the game’s difficulty. Souls games put forward a very particular narrative type that bestows the player with the choice to be as invested in the game’s narrative as they so desire. Ghost Song moves that narrative into the foreground to keep the player more heavily involved.

“Despite the constant apprehension in the game’s narrative, NPCs cut through to give the story more weight.”

We learn something has happened in the game’s story prior to the Deadsuit waking up, but details aren’t reliable and often appear woven into the lore in a way that is meant to make us ask more questions. Despite the constant apprehension in the game’s narrative, NPCs cut through to give the story more weight. The stakes change when we learn that our human counterparts on the planet are trying to escape Lorian. It’s a rich story that allows the player to take from it what they wish while still peppering a more traditional narrative throughout. The Deadsuit is given the task of recovering missing pieces of a spaceship that a group of characters will use to escape. It keeps the player progressing in the game, while also adding an additional goal of helping save the crew.

The Deadsuit also is very expressive when talking to the game’s NPCs, often she questions her past and her own purpose. Her morality is intriguing in how she questions her current actions throughout the game, sometimes it even sounds like she’s convincing herself that she is good for lack of a better term.

I’d also be remiss if I didn’t compliment Ghost Song’s soundtrack. Imagine peeled-back techno that feels perfectly matched with the gameplay and really rounds out how the game envelops the player. I particularly enjoyed the experimental longing nature of some of the tracks, they had this feeling like they were reaching out to the Deadsuit, and by extension the player. The entire album played a huge role in how I interacted with the game, as it held the tone and continued to evoke those feelings of melancholia throughout the game. Apt given the game’s ominous title. 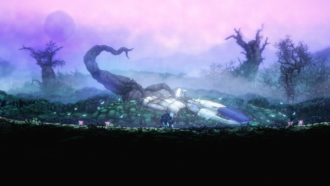 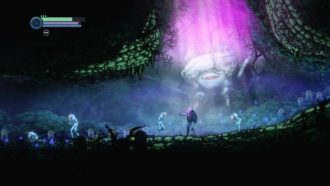 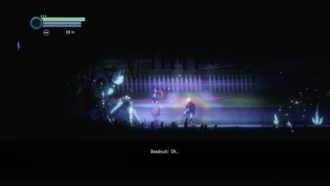 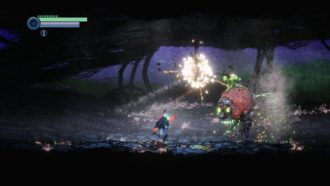 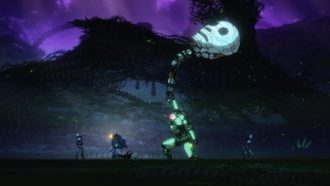 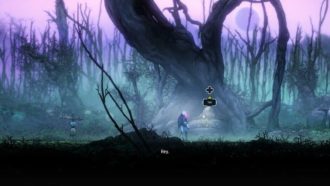 Where Ghost Song left me wanting was in the gameplay department. While the traversal controls are perfectly sound for a platformer, the finer combat controls really held back my enjoyment of the game. While I found using the blaster was fun, precise aiming was a tedious affair that often caused me to die on many occasions. I can’t even call this a skill issue on my part. If anything, that precise aiming in a sidescroller is the issue, since it was only rarely utilised outside of combat.

It’s also worth noting that even after upgrading the arm cannon significantly, it never felt that powerful. The various enemies and bosses do feel like bullet sponges considering the damage they are copping, but perhaps the Deadsuit’s blaster isn’t all that strong to begin with. Meanwhile, the special swappable abilities were stronger, but there was no way to toggle between them, requiring a more troublesome manual swap. This of course proves tricky when you need specific weapon add-ons to clear pathways of blockages. Much of the game relies on the player doing the leg work to make progress into walled-off areas at the cost of breaking the flow of the gameplay. The further you progress into the game, the more it seems to buckle underneath it’s own mechanics. It’s a delicate balancing act that while flawed, does attempt to give the player access to the new systems. I found it mainly tedious when one would be having to stop and start as they swap augments. It could be considered a plot device, to have the Deadsuit struggle to juggle these abilities, but the absence of any player-side system to interchange feels off-putting.

The deeper the player descends into the game, the more apparent it becomes that the difficulty of the game is mostly due to the health of the enemies and bosses you encounter. Even on easy mode, it feels hard. Arm cannon upgrades don’t feel as strong as they necessarily should be which in turn leaves the player feeling quite underpowered. On one hand, I love how this plays into the general melancholia of the game, but on the other, I hate how no matter how much I grind for the upgrades – I still feel weak in comparison to the game’s foes.

Mechanically, Ghost Song fits the genre but chooses to be more of a love letter to the earlier entries rather than a current and updated adaptation of the genre’s characteristics as one might expect from a game released today. While there are nostalgic benefits to this, the setbacks are more apparent. Even the story beats are quite rigid with little room to move between player choices. This carries through to the game’s endings, each of which is structurally sound but lacks that satisfying finale the game clearly deserves.

Each of the endings means well, but as a resolution, they more or less pin the narrative down with a plot point that could be considered a turning point in the game depending on how you look at it. Maybe what this game needs is a narrative map so players can track down the other endings. I’ve since become aware of another ending that contextualizes a relationship the Deadsuit questions during the playthrough. I do find it frustrating that I didn’t find this ending naturally.

Whilst at first I experienced apprehension when playing Ghost Song, by the end I was left wishing there was even more of the game I could dive into now that might satisfy my curiosity about the game. Deadsuit is a fascinating character, surrounded by an intriguing roster of NPCs that have honestly left me with more questions than answers. The vibe of unrequited safety and unending sadness is quite enveloping as a player. The world pulls you in with its uncertainty, and by the end, it doesn’t quite want to let you go. If the game mechanics felt a little more giving I feel like this could’ve been a much more well-rounded game.

Ghost Song cuts its own path that favours its boldness but lacks that finishing touch. Resolutions feel as though they lack clear finality to the player and it comes at the expense of closure in the game. Maybe some DLC might sort out some of the remaining threads, or maybe we need to venture deeper into the moon for answers.

Ghost Song is an aesthetic descent into sadness that could’ve been much more, yet stumbles on the final lap. The game explores interesting characters while filling out the game world with melancholia, acting as a love letter to the Metroidvania and Souls genres. The soundtrack brings a resounding presence to the game that really cements that overall vibe for the player, enticing them in for more. There is enjoyment to be had here, but players might find that wonder and mystery replaced with frustration when coming up against bullet sponge enemies and a game narrative that never quite resolves in a satisfying way.