The return of old-school shooters continues to march on with Apptivus’ rogue-like Impaler. Calling itself a “minimalist arena shooter”, the game is easy to pick up and get right into the madness of waves of creatures. While that excitement doesn’t last very long, for only USD $2.99, this experience is a fun little respite from other titles.

Strike at the root

With basically a non-existent plot, Impaler gets straight to the point. Impale waves of monsters with magic spikes in a small, rectangular arena. Piercing the variety of gothic monsters with spikes can be mixed up with one of six weapons selected before starting a run. The game emphasises creativity and movement, allowing the player to gun down foes or stab them from afar. You can use verticality to gain a height advantage and eventually release a devastating ground blast.

As such, the gameplay is really the sticking point of this byte-sized fun. If you’re someone looking for a story or character development, Impaler isn’t for you. However, the game does feature a crossover with Project Warlock, another Retrovibe-published game with more depth and content. The gameplay and style of the two are pretty similar. So, you could say they are the same universe if you wanted to invoke your own connections.

Impaler is fully compatible with the Steam Deck. It’s truly the perfect game for the platform, offering quick action with smooth controls. It’s not a game that will be sitting on the digital shelf for years to complete but also not one that will keep you interested for more than a week. 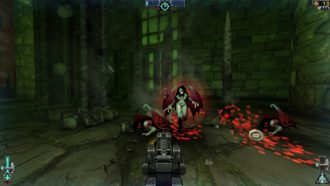 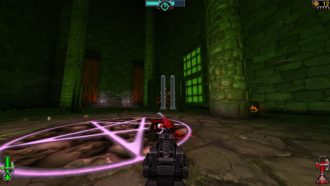 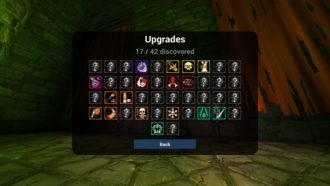 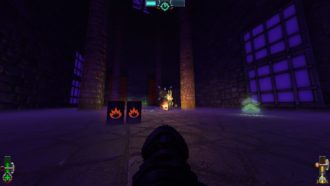 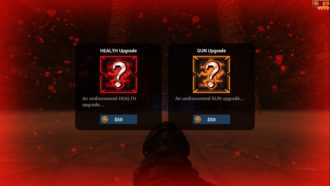 After selecting the weapon to take to the arena, players are set against ten waves of enemies and a final boss battle. In each wave, a random selection of enemies will spawn with pillars, logs, and jump pads adding or obstructing movement around the space. Using the spikes to navigate over obstacles or blasting them away with weapons helps open up the arena and lets the fast, first-person action flourish.

Each wave will spawn three trophies in the centre of the map. The objective is to use everything at your disposal to move the trophy into the golden highlighted circle to release the gold coins inside. This is currency and also collected in smaller doses by defeating monsters. At the end of each round, two upgrades will be offered for 50 coins each to improve a range of abilities: boost health, collect more gold, less recoil, make rockets fly straight, and time dilation.

“…the final boss battle ends up being a fairly unimaginative rinse and repeat.”

It’s a simple way to add an extra layer of depth to these brief scenarios. Still, the progression isn’t meaningful and doesn’t feel impactful to the overall gameplay. There are no permanent upgrades or anything that drives a fundamental change besides one or two exceptions. Upgrades are all mainly stat boosts and contribute to the game being a little too easy. Some further refinement to these upgrades or even the difficulty of each wave would help make the game more satisfying.

As many creatures spawn, a time-slow effect can be activated to help with accurate firing and safe movement around hordes. While it is a valuable ability, it often slows down the already straightforward gameplay slightly too often. It doesn’t help that its activation is seemingly automatic once a meter is filled. Better implementation of this slow-down ability would benefit these short encounters.

While smashing through the crowds of creatures, players need to monitor the overheating of their weapon. How quickly this metre is filled depends on the gun, but any overheating weapon isn’t a fun mechanic. Admittedly, it forces focus on the primary impaling gun, still for such a sharp experience it hurts how rapid gameplay could be. Instead of overheating, I wish Impaler used ammo reserves dropped by enemies to encourage more concentrated gameplay.

As each wave becomes progressively more chaotic, the final boss battle ends up being a fairly unimaginative rinse and repeat. Facing off against a floating demonic skull, the player needs to gain verticality and stomp on its exposed brain/CPU core several times to defeat the beast. During the encounter, it will spawn smaller enemies and create harmful obstacles around it each consecutive mini-wave to up the ante. Unfortunately, it just doesn’t feel as impactful or thrilling as the rest of the game.

As sharp as a needle

Impaler’s visuals are a selling point for fans of 90s shooters. All the enemies are sprites with impressive artwork for what is capable with pixels. Despite each wave being set in the same space, the arena often changes colours and atmosphere from a hellish orange to a greeny fog. It adds much-needed variety to an otherwise dull room.

“Impaler’s visuals are a selling point for fans of 90s shooters.”

Built in a custom engine made in pure C and OpenGL, the game runs so damn smoothly. Dynamic lighting, fog, volumetric effects, and smaller physics items like bullet cases and giblets flying across the screen enhance the old-school shooter. Even the system files are very neatly packed. Not surprised it is fully compatible with the handheld Steam Deck.

Impaler boasts an entirely original retro synth and metal music soundtrack. It’s certainly of the era it attempts to tribute, but it can often get lost behind the meaty and crunchy sound effects. I recommend playing around with the sound settings before jumping in to let the music shine more during gameplay. While it isn’t groundbreaking material, it is an excellent addition with decent effort put into its production.

Impaler is a good time for shooter fans looking for an instant nostalgia fix. The gameplay, music, and visuals achieve the ideal 90s aesthetic with a gothic twist. While it is limited in content, short, and a little too easy for the genre, the cheap price tag is appropriate if you want to give the game a stab.