Knights of Honor II: Sovereign Review – Long may you reign

Knights of Honor II: Sovereign is a real-time grand strategy game developed by Black Sea Games and published by THQ Nordic. The game is a sequel to the original Knights of Honor, which was originally released in 2004; set in medieval Europe, one of the things that immediately stands out about Knights of Honor II: Sovereign is its detailed visuals. With the interface mainly consisting of a grand map of a medieval European kingdom, it feels like being plunged into a beautiful painting of green pastures and bustling cities and towns. This, combined with the game’s surprisingly subtle and soothing soundtrack, does a wonderful job of creating a comfortable atmosphere where you can while away the hours.

Like every grand strategy game, Knights of Honor II is a complex and layered experience, but the overarching aim is simple: choose a medieval kingdom to play as and achieve victory by becoming the dominant force on the European continent. The game gives players the option to either start their playthrough in 1110, 1224, or 1360 AD, and offers kingdoms ranging from Western European medieval ones to kingdoms in East Africa. Every kingdom comes with different cities and resources at the start of a game, and depending on your chosen starting point in history, will have different borders.

Practically, there are several things to keep track of in Knights of Honor II: Sovereign. For starters, there are six core stats to keep an eye on: your treasury, books, religion levels, commerce levels, food income, and levies. Secondly, there’s the royal court, which is the beating heart of your kingdom. Like the original 2004 Knights of Honor, you’re able to invite up to eight knights into your court that you can then either install in your kingdom’s provinces to keep the empire’s wheels turning or send on dedicated missions to enrich your kingdom.

“Knights of Honor II: Sovereign is a massively impressive feat that will delight many strategy fans.”

Each one of your eight chosen knights comes with unique skills, talents, and class, which can benefit your kingdom. In total, there are five different knight classes in the game: marshals, merchants, diplomats, spies, and clerics, each with their own benefits. While marshals can lead larger armies, for example, clerics can boost your kingdom’s religion stats, and merchants can set up trade routes between kingdoms and seal trade agreements. While eight knights sounds like a generous number at first, you’ll soon notice that it’s all about striking a lucrative balance; provinces governed by knights yield a lot more resources, food crops, and gold, while provinces without governance yield very little in comparison. Once you start expanding your kingdom and gaining more provinces, you’ll have to be mindful about which knights to plonk down in a province and which ones to send on the road. In other words, the strategic use of each knight has a huge impact on the state of your kingdom, and, depending on how you manage your knights, this can turn the tide of the game when it comes to securing victory.

Lastly, public opinion and your fame levels must be considered. Each kingdom comes with different social classes who all have an opinion of how well you’re ruling the place. The public opinion is reflected in a window at the top-left of the main interface of the game: depending on the social class in question, their approval or disapproval will generate different advantages or disadvantages. Disapproval from the nobility, for example, will mean less stability within your kingdom, less influence, and higher prices to pay when it comes to bribing your knights. Approval from the peasant class, on the other hand, means higher food production and faster population growth.

If things go well, however, you will develop a positive reputation which can, in turn, generate fame points. The number of fame points for different nations are represented through the game’s greater power menu, which, similarly to Civilization’s overall scoreboard, shows which nations on the map are in the lead across five main fame categories: wealth, society, culture, politics, and conquest. Once a kingdom reaches five thousand points across all categories, they can initiate a vote to claim the title of ‘emperor of the world’. If the vote is successful, they win the overall game. However, much like games such as Civilization or Crusader Kings, there are several ways to expand your empire and emerge victorious in Knights of Honor II: Sovereign: you claim the emperor of the world title, conquer all other kingdoms on your map, develop your economy, or gain kingdom advantages. The different paths to victory, combined with the knights system, work well, and depending on what victory you’re gunning for, help to spice things up from turn to turn.

For anyone who has played the original Knights of Honor, the term ‘Kingdom Advantages’ may be familiar. Like in the first game, there are different advantages that can be obtained by securing certain goods. In Knights of Honor II: Sovereign, there are eight kingdom advantages players will need to obtain before they can claim victory: mercantilism, abundance, masonry, progress, Age of Discovery, Age of War, Age of Prosperity, Golden Age, Age of Enlightenment and Age of Triumph. Depending on the advantage in question, the goods you’ll need to have in your possession to claim the advantage will differ. For Age of War, for example, you’ll need cannons, medicine, war horses and noble men, while for abundance you’ll need ale, candles, glass, meat, medicine, oils, salted fish, and wool.

The sheer number of resources you need to secure victory means this strategy can be a slog: even missing one advantage out of eight will mean you can’t win the game this way. However, that doesn’t mean advantages are useless in and of themselves; each advantage comes with bonuses that will make things run more smoothly in your territory. Securing the abundance advantage, for example, will speed up population growth and increase your population’s happiness. Age of War, meanwhile, provides bonuses to your army’s capacity and general morale. 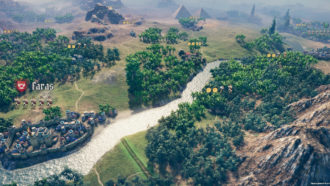 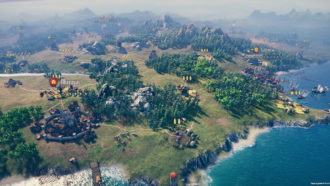 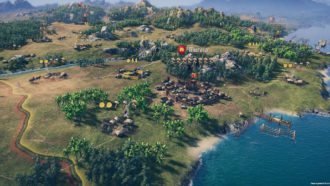 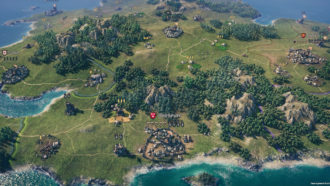 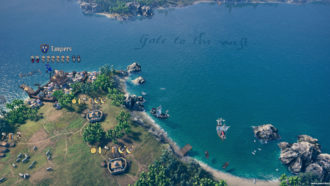 If that all sounds too complicated, there’s always the option to aggressively expand by going to war with other kingdoms, or marry people from different kingdoms, Crusader Kings-style. Similar to titles like Age of Wonder: Planetfall and Total War: Warhammer III, any military battles can either be played out in real time on the battlefield, or auto-resolved by AI. If you take the RTS route, you’ll find that the gameplay doesn’t differ too much from other RTS titles. Before entering battles, the game will give you an estimation of how likely it is to secure victory through a sheer unit counter. You then have the option to either auto-resolve or proceed with an RTS battle. If you choose the latter, you’ll see your units fighting it out on the field.

Similar to games like Age of Empires, the strength of your army will depend on what structures are built in your towns and cities and what kind of levies you have at your disposal (noble knights will usually have better attack powers than untrained peasants, for example). Battles can also be influenced by the terrain. Depending on whether you’re going to war in a castle, a field, or on the open sea, your troops might have to break siege and be more heavily armoured. Battles can be won by capturing a number of enemy points of interest on the battle map. Once you’ve captured all of your rival’s points of interest in battle, victory is yours.

While the battles themselves are enjoyable, they’re often overshadowed by Knights of Honor II’s broader gameplay. In true Paradox strategy game fashion, there are endless resource menus to keep track of when managing your empire, and it’s easy to get lost in the sheer volume of numbers. At times, auto-resolving battles feels like the better option simply because it’s more efficient timewise. For this reason, Knights of Honor II may not be the best fit for newcomers to the grand strategy genre. While the game has a great level of depth, it takes time to learn every little mechanic, and just when you think you’ve seen everything, yet another feature pops up. If you’re a fan of this type of micromanagement, Knights of Honor II will be an absolute feast. However, if you’re looking for a title that will be less demanding when it comes to resource management and statistics, opting for something more forgiving like Civilization might be a smarter move.

As it stands, Knights of Honor II: Sovereign is a massively impressive feat that will delight many strategy fans. The medieval setting is beautiful and immersive, and the different paths to victory are a great mechanic keep players on their toes. Since some victory paths, like securing resources for a kingdom advantages victory, can take time and effort to achieve, this also adds a healthy dose of challenge and flexibility to the overall experience. You’ll often find yourself having to re-think a strategy mid-playthrough as wars break out and foes close trading deals. While this type of gameplay may not be everyone’s cup of tea, it will certainly be challenging and energising to those that don’t shy away from some statistics and resource management.