LONE RUIN Review – Over before it began

LONE RUIN is a roguelike twin-stick shooter with a specific focus on spellcasting releasing from Swedish indie studio Cuddle Monster Games. This is their second commercial release and the game kicks off with a bang as the distinctive visuals and thumping soundtrack get your blood rushing. Unfortunately, LONE RUIN sprints to the finish line far too quickly as credits roll long before you feel as though you’ve earned them.

LONE RUIN is very narrative-light. You play as a spellcaster who’s adventuring into a hostile set of ruins to find the magic that lies in the centre. Some wordless and brief still frames are about all the game offers in the story department, though it’s enough to set a tone as the lovely pixel graphics depict a forlorn world and a determined protagonist looking to take on a monumental task.

With hues of pinks, purples, blues, and greens—LONE RUIN has a distinctive colour palette that’s both intense and soft. It paints an alluring world but one that’s full of mysticism and the unknown. It’s a good-looking game but not one that pushes the boundaries. The environment can become a little samey as grass and stone combine to create overgrown ruins without new areas to help shift that visual repetition. The colour scheme is pleasing and there’s a commitment to that palette that’s impressive, though it can occasionally come at the cost of readability as enemies’ spells often weave together into a blob of purple mess.

The gameplay certainly makes up for any lack of narrative and any visual parroting as you dodge around an enclosed environment, launching a variety of attacks at your foes whilst trying to keep yourself safe. LONE RUIN is a twin-stick shooter played from a virtually top-down perspective, with much of the moment-to-moment gameplay involving reacting to your enemies’ advances and positioning yourself in an advantageous way so as to never get overwhelmed. You’ll advance through a string of connected rooms, each giving you an opportunity to get a new active spell, passive buff, gold, upgrade, or more. A death ends your advances as you start fresh with a new opportunity to try again, this time with newly generated rooms, upgrades, and more. 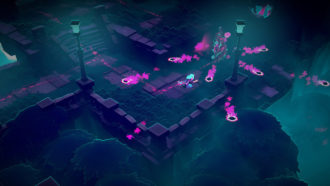 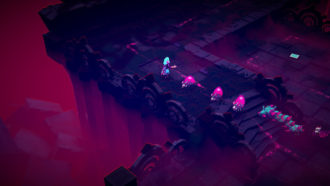 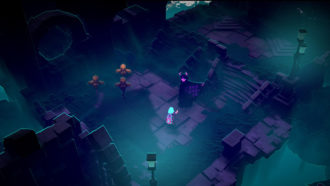 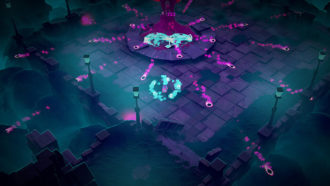 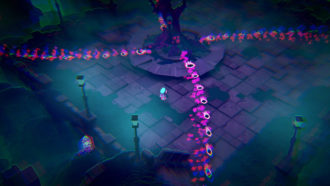 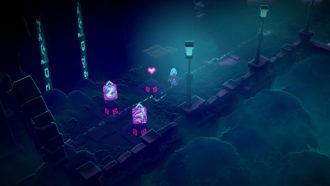 I personally love a roguelike. It’s an opportunity to engage in short gaming sessions that always differ as you test yourself against an evolving challenge. LONE RUIN ticks those boxes, with its best element being the range of spells and upgrades available. Every run starts with the ability to pick one of eight spells, all behaving quite differently from one another. The scythe is a close-range weapon that allows you to slash through your foes. Chain Lightning is a quick zap that bounces between enemies on a short cooldown. The Boomerang launches out in front of you and creates an area-of-effect damage field that can be retracted at your will for immediate refire. This is just a small selection of the possibilities found in LONE RUIN, with extra spells beyond the starting eight able to be found whilst playing. Three spells can be learned per run and woven into your attack pattern, with other passives and upgrades augmenting those spells and changing the way you play. There’s a real sense of finetuning your character here as you find the build that works best for you and experience some great and powerful combinations of abilities.

Upgrading the railgun to allow for multiple fires, a wider area of effect, bounces off walls, and shots behind the character as well as in front means that the gameplay evolves as you play. And every single spell has similar upgrade paths that just make for satisfying and adaptive gameplay.

“LONE RUIN is a game that boasts replayability, and whilst that’s true, it also feels like an excuse to combat valid criticism of the main campaign’s short length.”

The big problem with LONE RUIN is how quickly it strips you of those awesome builds and combos. With only three levels to delve down and three bosses to fight, the game ends far too abruptly. I personally rolled credits on medium difficulty after 2 attempts and only 45 minutes of total game time. Whilst a harder difficulty mode exists, it doesn’t change the pace of the game, still only offering three strings of levels. LONE RUIN is a game that boasts replayability, and whilst that’s true, it also feels like an excuse to combat valid criticism of the main campaign’s short length. Competing for leaderboard scores just does not feel as worthwhile as experiencing new content. New areas with different visual designs, new enemies, new room layouts, new bosses beyond the three that are available currently—all of this and more would have gone a long way in helping the game create new and fun experiences for the player, and would have helped other areas of the game’s designs match the variety and depth found in its spells and upgrades system.

A survival mode is on offer which is nice, removing the standard roguelike gameplay loop and instead creating a wave-based, single-arena combat sequence where you upgrade your spells and passives against a ticking clock whilst your foes similarly grow tougher and in larger numbers. It feels like a bit of a spinoff experience. One that’s fun for sure, but not likely to keep you as engaged for as long as the standard game mode.

Small inconveniences are yet to get ironed out of the game. I can’t help but feel the game would have benefitted from a quick restart option, for instance. You can also come across a spell shop where the spell on offer is your dash ability, something you always already have, and so it doesn’t make sense for it to take up a spot there. These are nitpicks, but they also show a simple area of improvement for LONE RUIN where further playtests and updates would have helped. Where the game doesn’t falter is in its music. Composed by Adrian Shegstad who goes by the handle Zantilla, the high-octane beats sound futuristic and grimey, with warped vocalisations adding to the atmosphere and melancholia. It’s really top-notch stuff and well worth a listen to by itself.

LONE RUIN is a game that’s simply too short for its own good. A lack of content means the experience is over long before it ever should be, and any additional difficulty modes and a survival mode don’t do enough to justify the small scope. The experience is saved somewhat by good gameplay and a great spells/upgrades system, though not enough to call this one a real must-play.