When a mystical land is on the verge of being overrun by the forces of evil, a hero will emerge to fight them off. But instead of the hack-and-slash routine, Mahokenshi has a hero casting spells and physical attacks in card form. The experience of fighting evil through cards is enjoyable, and the concept is solid. But Mahokenshi’s potential is held back by its short length and gameplay that isn’t as interesting as it sounds. It’s a fun experience while it lasts, but you must be a completionist to get the most out of the game.

The story of Mahokenshi is simple; a peaceful realm has suddenly come under attack from the forces of evil. Four characters band together to fight back and reclaim the realm for the good. Each character represents a different house and their strengths in combat. There is Ayaka who specializes in offence and enhanced abilities after taking damage. Kaito is the defensive fighter who provokes opponents and builds incredible defences. Sota is the stealth expert who relies on diversions and poisons. Misaki rounds out the team as the magical and spiritual expert.

Together, you fight back against the invaders and bring peace to the realm, getting some assistance from other supernatural forces. You travel around the Celestial Islands taking on missions similar to Midnight Suns, completing missions and fulfilling objectives.

The visuals in Mahokenshi look fantastic. The artwork takes some inspiration from medieval Japan and its mythology, staying true to the designs of the era. The battlefields and 3D models look great and it generally feels like moving through a mystical imagining of medieval Japan. The models are distinct and the combat is visually appealing.

The authenticity continues with the audio. The narration is properly done, sticking to the proper Japanese pronunciation whenever possible. Instruments are used to reflect the time period, and sound effects properly match the instances they pair with. You are never distracted by the audio, enhancing the feeling that you are in a mystical Japanese setting. Both factors come together to create an immersive experience, keeping you glued to the gameplay and invested in the welfare of the Celestial Islands.

Gameplay follows a similar format to other deck-building games. Every character starts with a basic deck of cards. You can get new cards unique to the mission either by going around the map and collecting them, or buying cards at a village. There is a small pool of fundamental cards that every character shares, but the majority are cards that align with a character’s specialities. By constructing a deck while playing, you learn what works and what doesn’t. This helps players quickly weed out which cards fit their situation, and which ones can be left behind.

Each character comes in with base stats of strength, defence, energy (to pay card costs), and card hand size. You can upgrade these stats with altars around the map or through other means like completing side quests. Stats don’t carry over from mission to mission, but you don’t need the additional stats to win.

“Experimentation and strategy win battles more than brute force through cards. Finding the winning combination will always be a proud moment.”

Starting with a deck customised to a mission means you aren’t at risk of falling behind if you made poor card choices. Experimentation and strategy win battles more than brute force through cards. Finding the winning combination will always be a proud moment. You make use of the terrain, whittle down defences, and pick your fights wisely. If you find a card combination with the right synergy, you feel good because you experimented and took a chance, or properly planned it out. Mahokenshi rewards proper strategy and smart card usage, which ensure players are never hopeless in any mission.

Cards can also be upgraded with dojos around the map to boost their effects, though this is temporary. Permanent upgrades can be done through the Ways of the Mahoken, where you can use Crystals earned from completing objectives to give yourself more advantages. While card upgrades are temporary, going through Ways of the Mahoken gives you a sense of achievement. None of the upgrades are game-breaking, but they are significant enough that they reward proper planning. If you don’t manage to complete a mission objective, you can always replay a mission for the second time. If you enjoy a challenge and want to push yourself to get all the upgrades, there’s plenty of replay value to keep you occupied. It also gives players an incentive to replay maps and learn the intricacies of a mission, allowing room for experimentation until a proper strategy emerges.

Unfortunately, Mahokenshi’s weaknesses appear as you spend more time with the game. Being able to choose between four characters is one of the big draws of the title. However, you only start with one character (Ayaka) and have to unlock the rest by progressing through the missions. By the time you unlock the full team, Ayaka is the character you have gotten used to and levelled up the most, and is therefore likely your best option. Any character can complete the missions, which leads to Ayaka being your default choice for completing all the missions.

Each character’s specialties in combat are also emphasized, but Mahokenshi has an unspoken emphasis on damage. Kaito, Sota, and Misaki have amazing abilities, but they take a long time to set up or don’t provide a large benefit in combat. For example, Sota’s Stealth ability is supposed to hide his presence from enemies and throw trackers off his trail. But once an enemy is aware of Sota, they will always be aware of his location even if he re-enters stealth and comes back. That means stealth is mostly used as a way to set up a combo for damage, rather than be a strategic option.

Kaito and Misaki run into similar problems with provoking enemies and building up spirits respectively, which are key aspects of their abilities. Their abilities pale in comparison to Ayaka, who starts off dealing lots of damage and doesn’t need as much set-up time. It’s hard to justify using someone else when Ayaka can finish missions easier and faster thanthe rest. That takes most of the fun out of the innovation since there’s little incentive to use other characters.

The stark difference in character treatment is also obvious when it comes to selecting cards. Each mission has its own set of cards, but some require synergies to work properly. Unfortunately, the cards you get are randomized, and you can sometimes get no cards for a proper synergy. While this happens to everyone, Ayaka is the one character who can power through that disadvantage. Everyone else either has to keep holding out or restart the mission because their draws put them at too much of a disadvantage. It’s hard to be strategic when a game tells you that a card needs prerequisites to be reliable but then denies you of said cards. 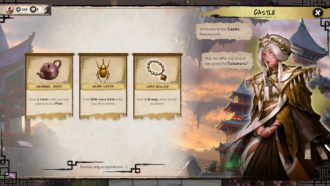 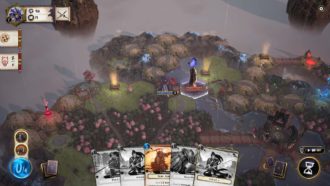 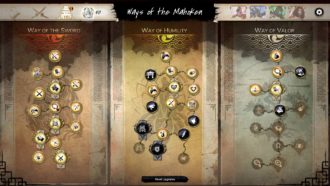 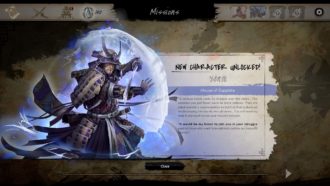 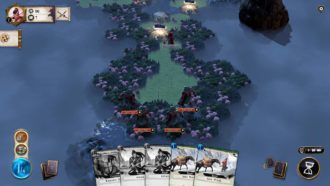 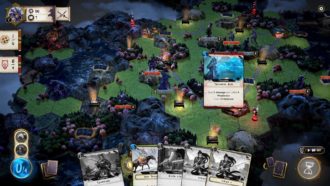 The main adventure doesn’t take long to complete; there aren’t many main missions before evil is vanquished. Other than going back and completing any objectives you missed, there isn’t a big reason to keep playing once you’re done. You can continue to experiment and level up the other characters, but the rewards for doing so doesn’t have a big impact. If you’re not a completionist, the replay value is almost non-existent.

Mahokenshi is still a fun experience while it lasts, and it will take some time before you can grasp the fundamentals. Whilst the game’s not properly balanced and the adventure is short, powering through with winning strategies and tactics is still enjoyable. It’s also an easy strategy game to learn, which feels good!

Mahokenshi is a fun deck-building tactics game that prioritises smart gameplay. Coming up with winning strategies and experimenting on the battlefield is enjoyable, and finding card synergies gives you a real feeling of accomplishment. Great care was taken with the visuals and audio to deliver an experience that really immerses you in the welfare of the Celestial Islands. Unfortunately, the characters aren’t properly balanced and there’s a clear favourite in terms of strategy, with not enough in-built incentives to explore the other characters. But if you are alright with a short adventure and are willing to complete every objective you see, you will have a good time with Mahokenshi while it lasts.