I spent almost as much time playing World of Final Fantasy  as I did playing Final Fantasy XV at the Bandai Namco preview Luke and I attended; and I have to say, this title is going to give it’s more serious sibling a good run for it’s money.

Funny, vibrant and (quite literally) shining, this game kept me singularly focused on exploring as much of the main storyline as I could, as fast as I could. Those who know my gaming style will be aware of how uncharacteristic this is for me, especially when it comes to Final Fantasy titles.

“I had to keep looking around the room hoping I wasn’t disturbing any other gamers as a result of the constant barrage of lines making my face light up.”

What I would like to highlight first of all, is just how well the humour is crafted in this game.

I had to keep looking around the room hoping I wasn’t disturbing any other gamers as a result of the constant barrage of lines making my face light up. In hindsight, I can only imagine how crazy I must have seemed to Luke, sitting beside me playing Dragon Quest Builders.

Memorable characters, including both heroes and villains, are given new life with fresh personas, and the rapport between our two sibling protagonists is also beautifully crafted. 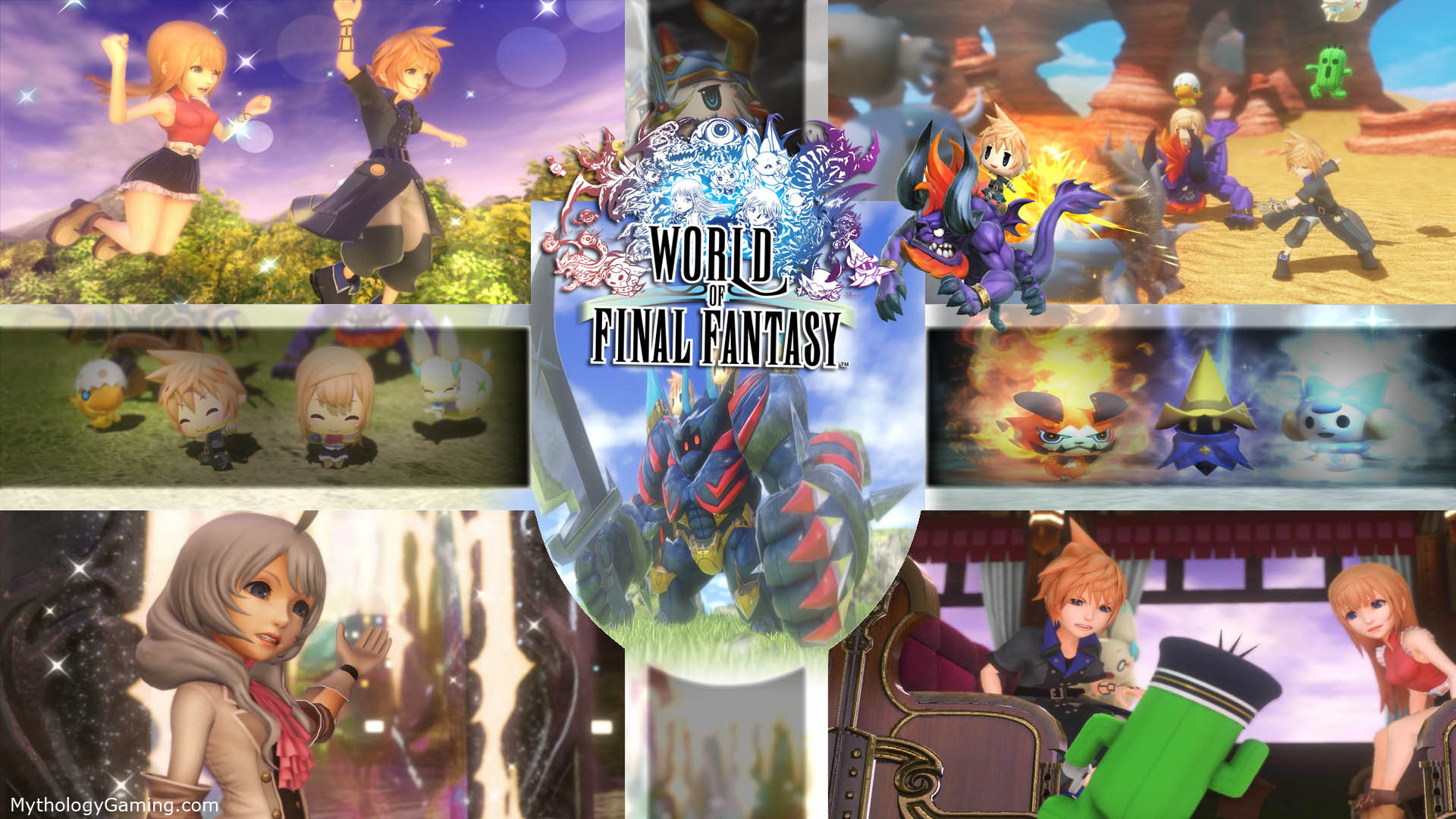 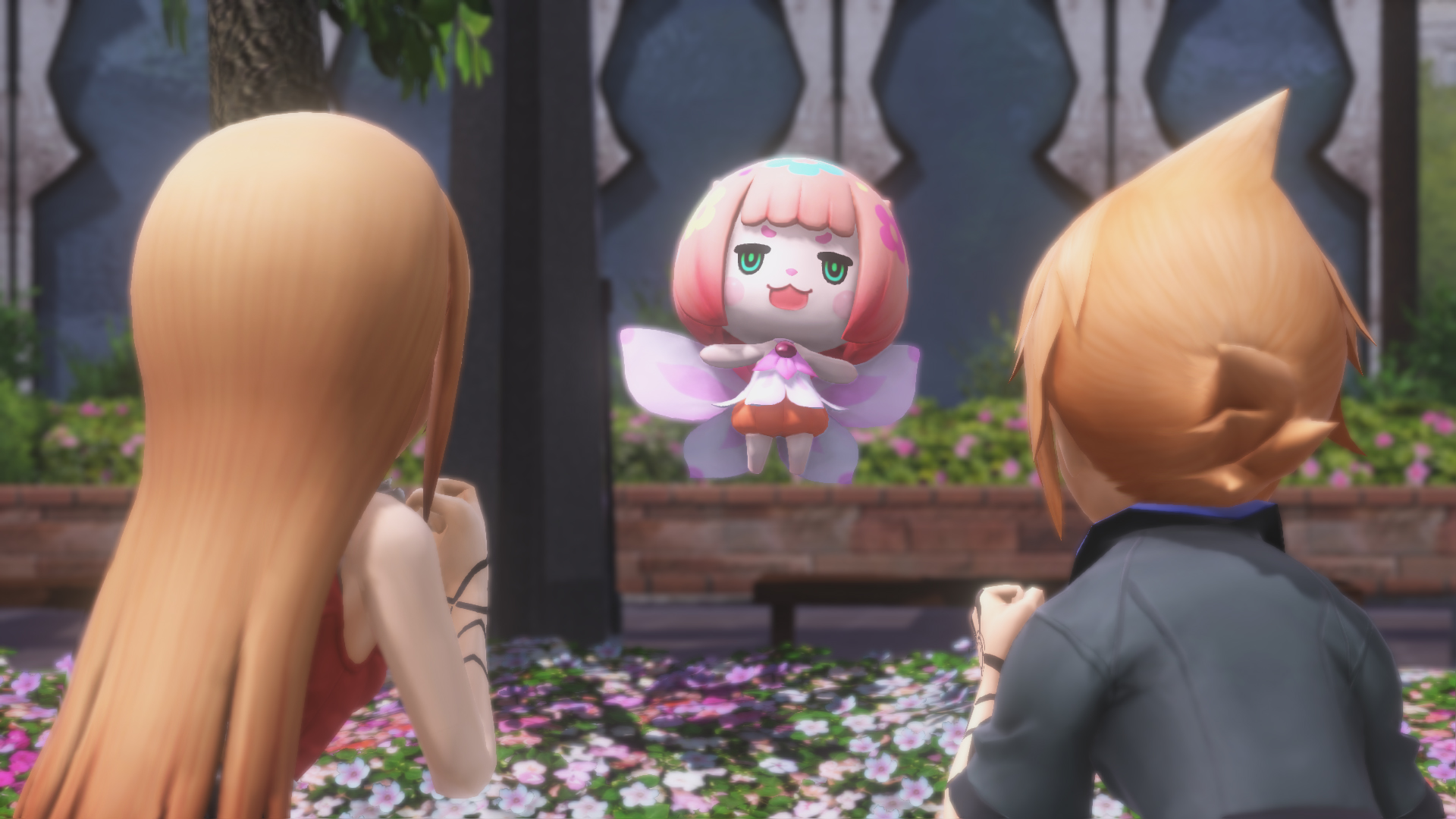 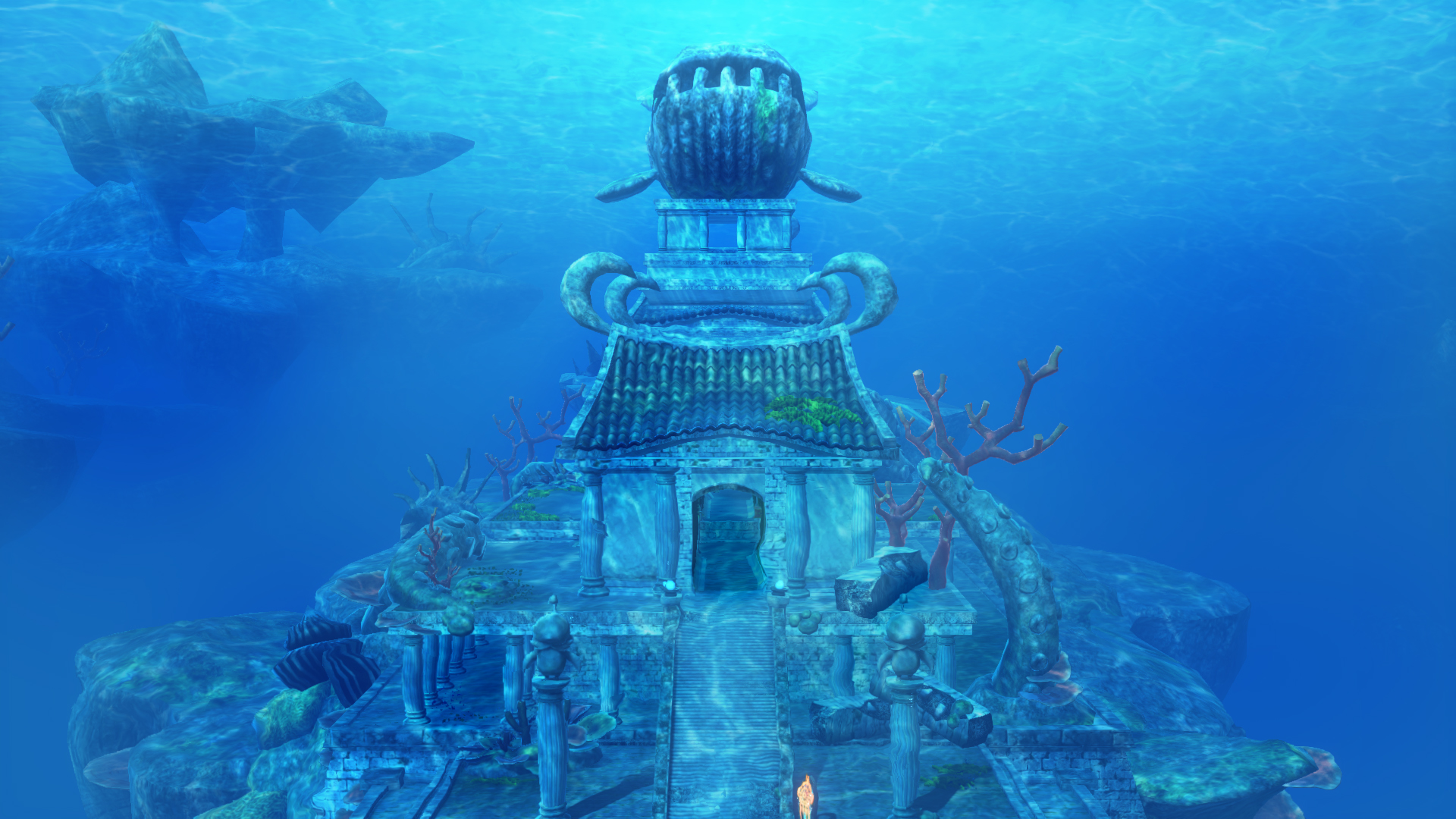 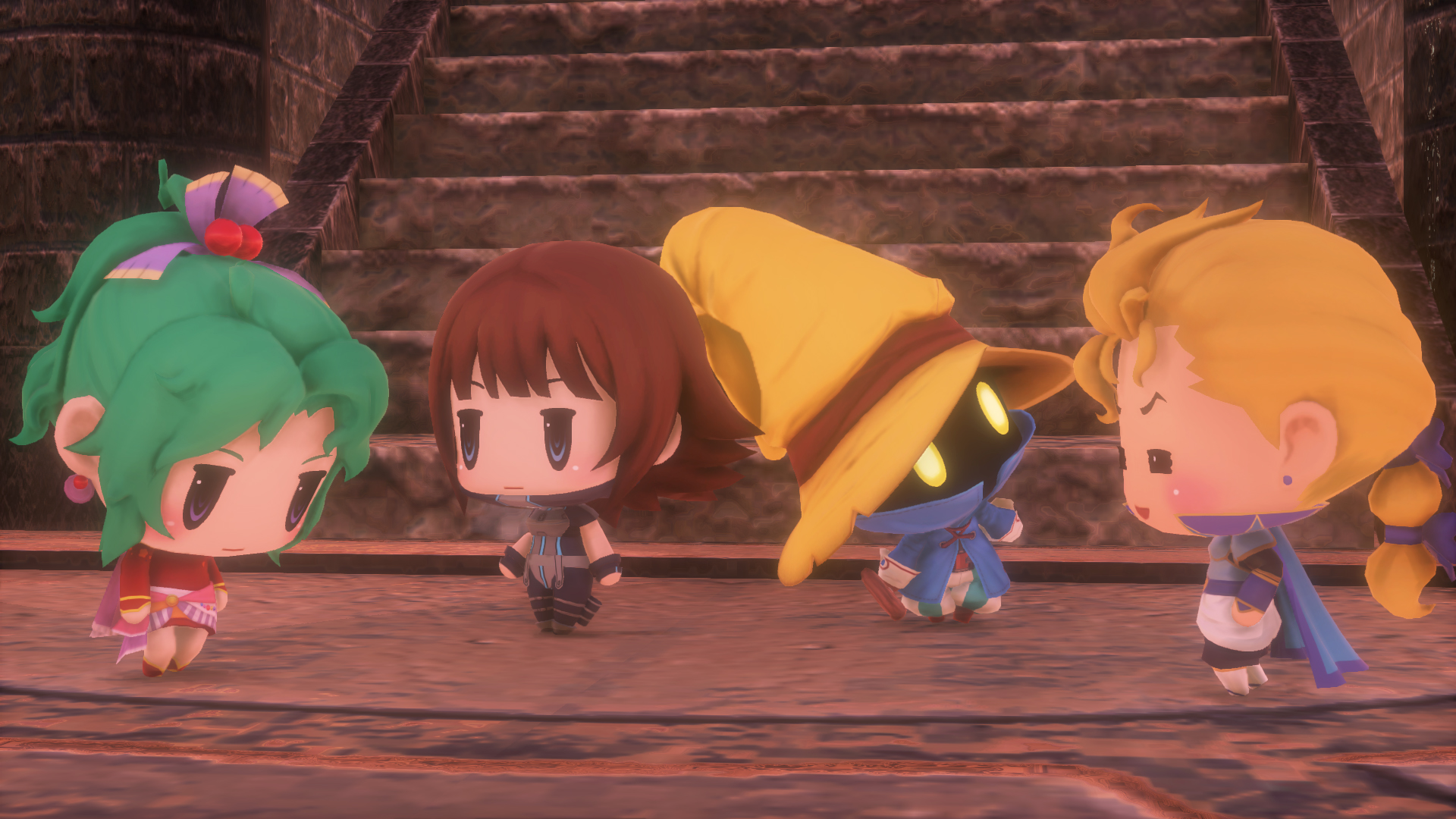 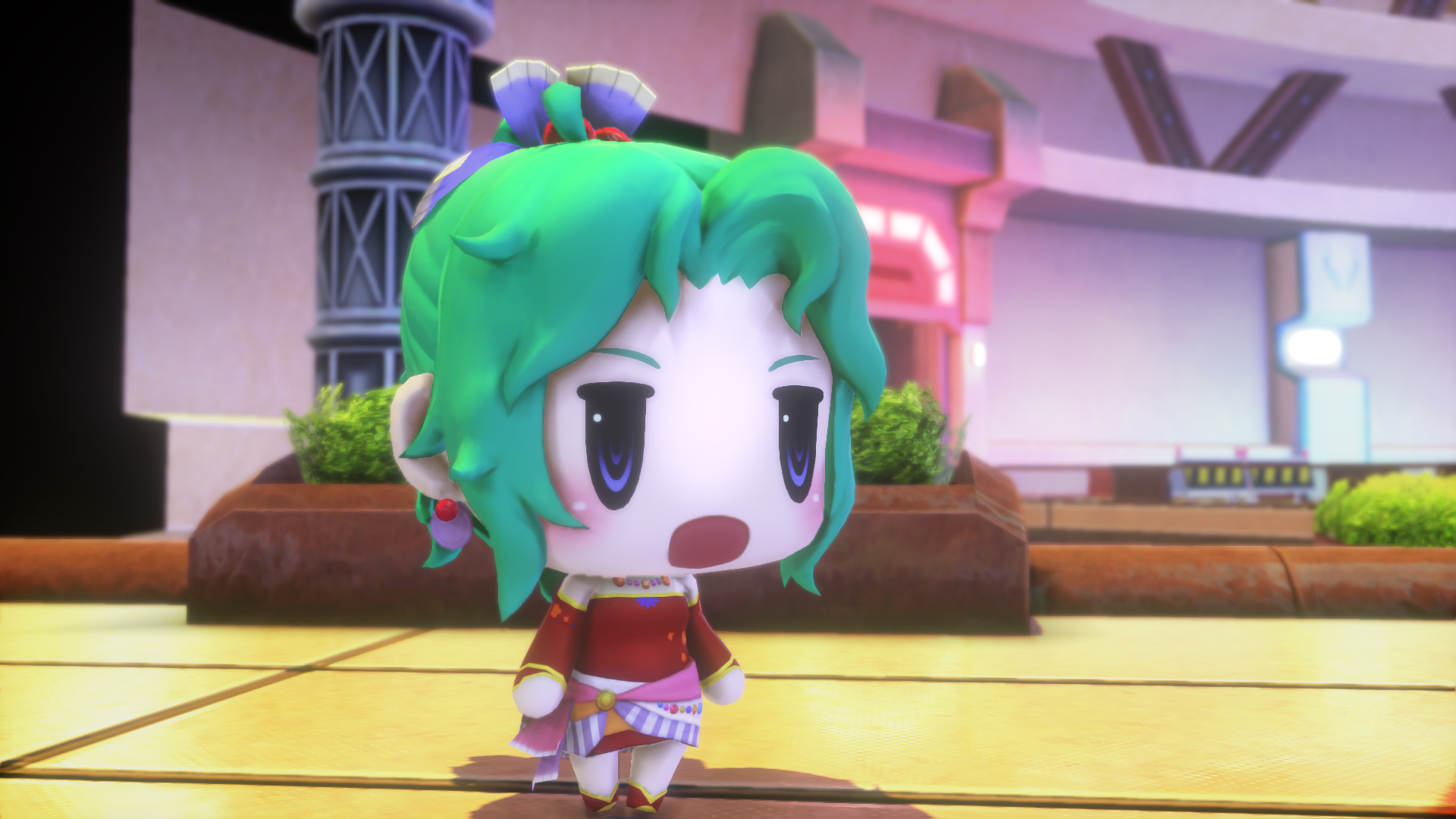 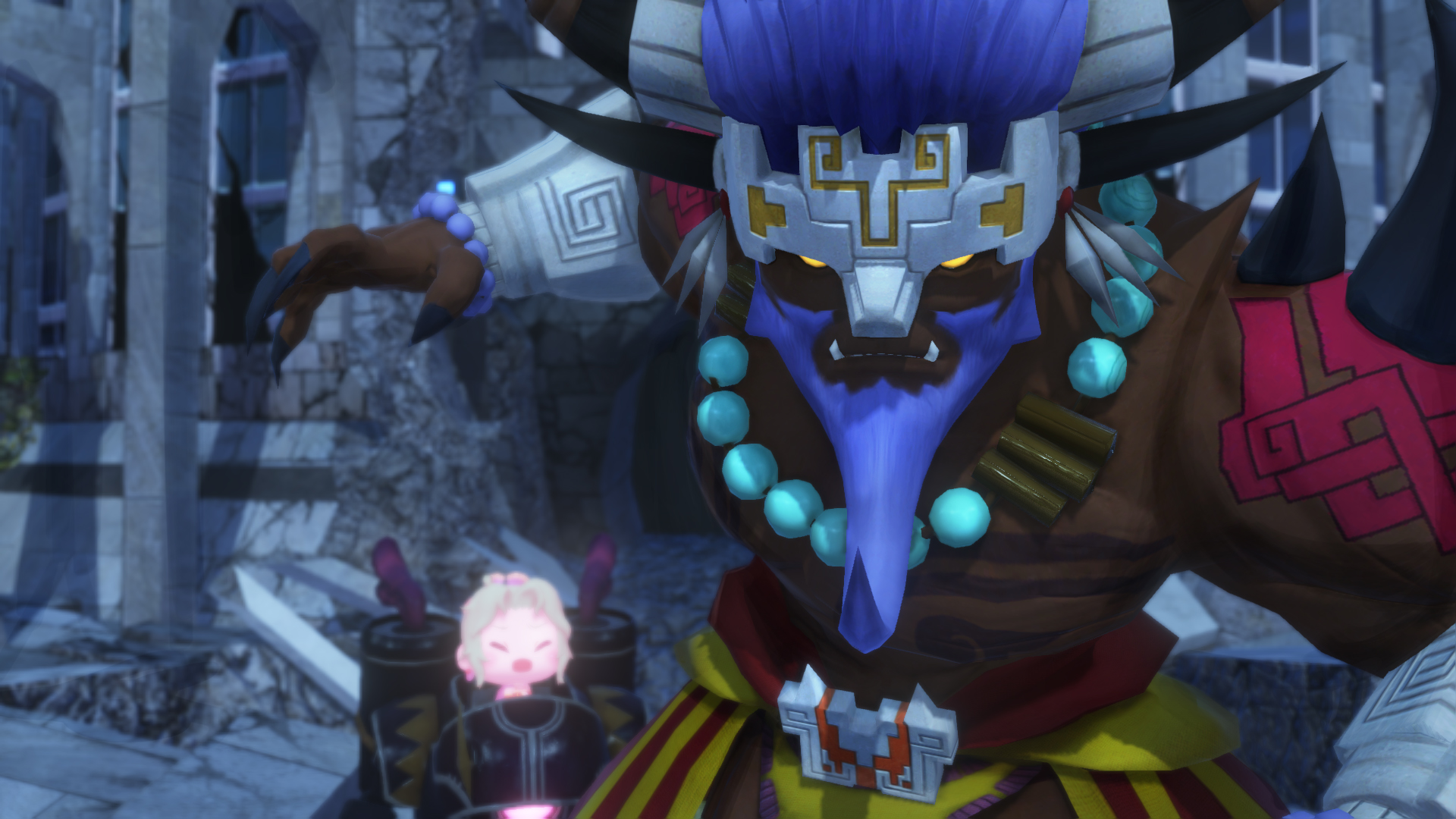 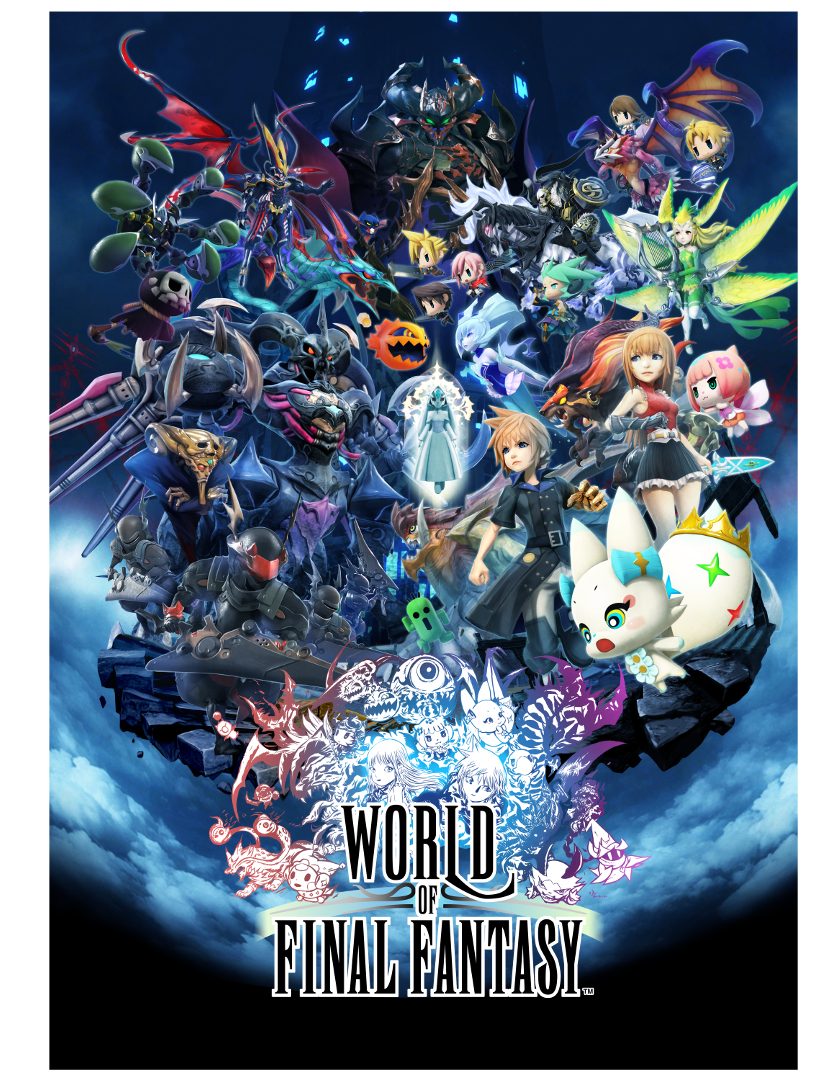 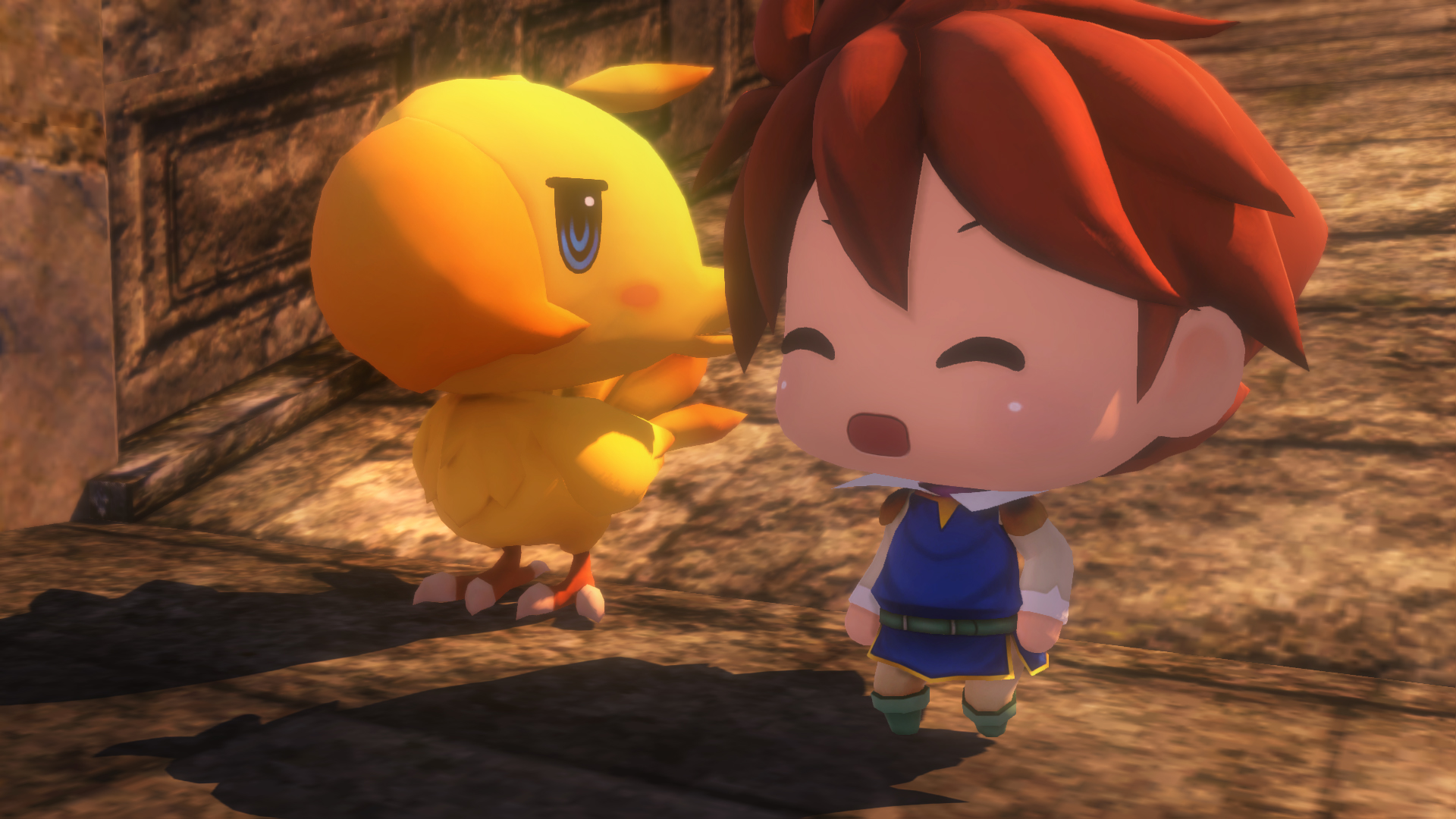 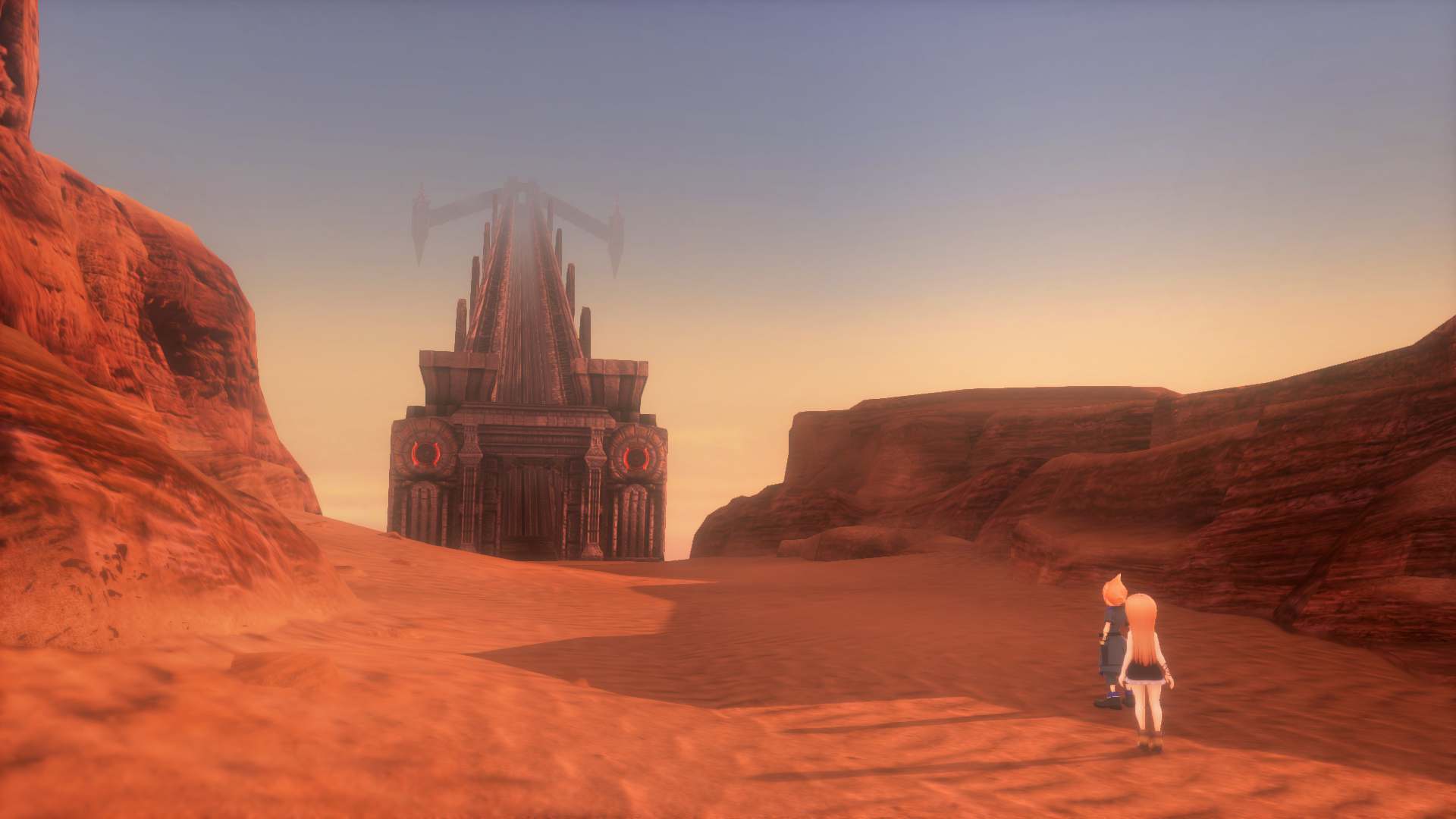 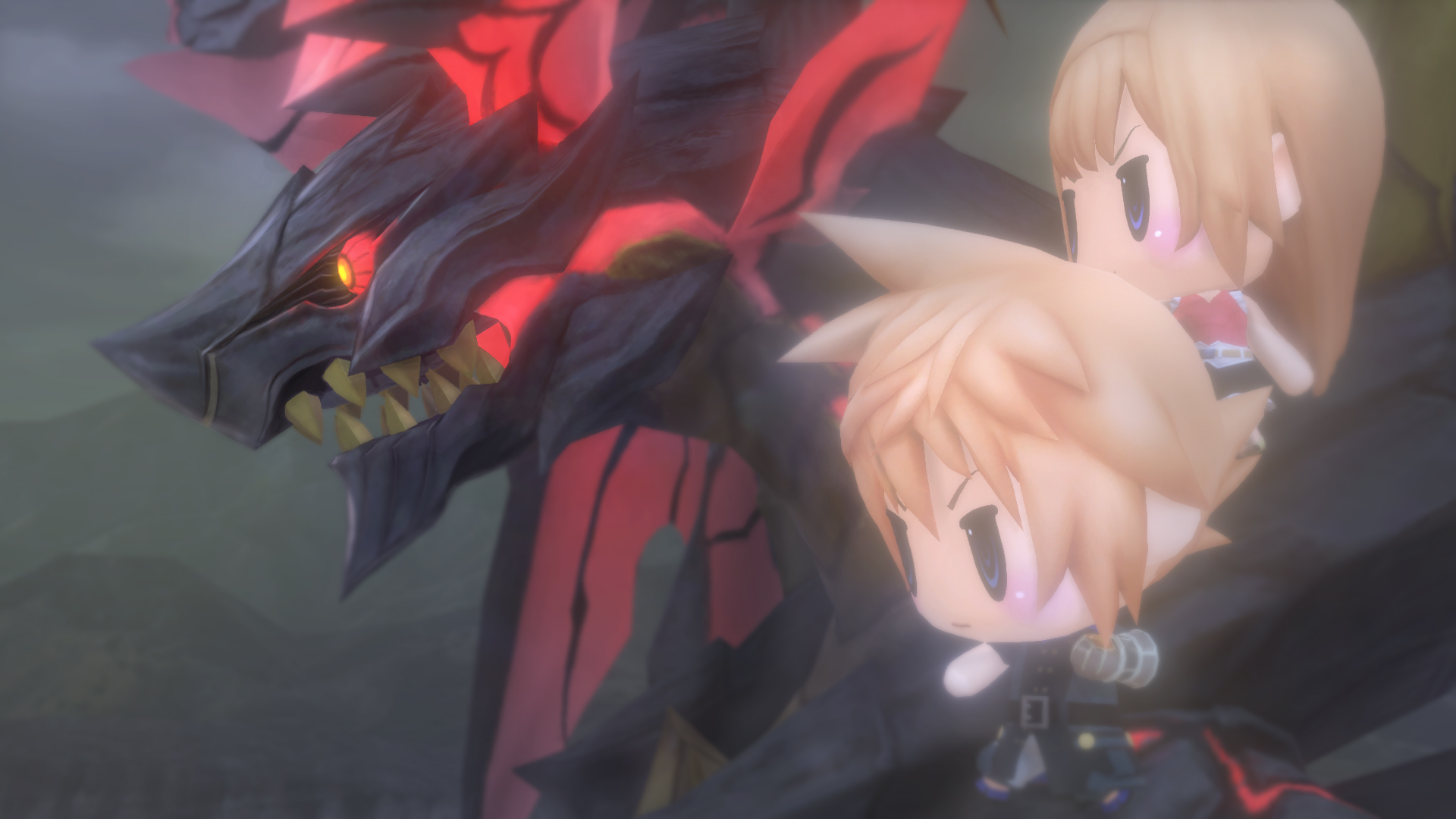 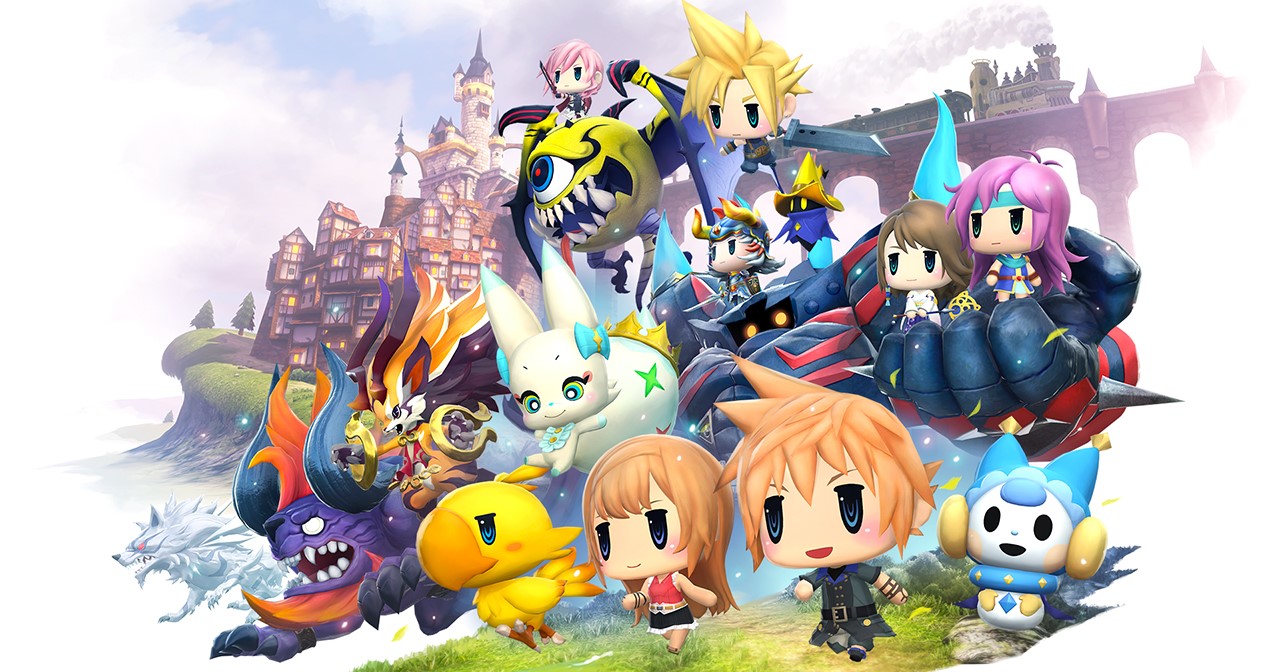 Having said that, this game also delivers the same intense kind of storyline that I have come to expect from the Final Fantasy series.

The concept, that losing your memories is very different to forgetting them, is a solid cornerstone of the game. Lann and Reyne’s quest to reclaim their memories and mirages is crafted exquisitely, and the rapport between the two sibling protagonists is beautiful.

During the course of your adventure you are required to ‘imprism’ the mirages (what the enemies are called in this title) you encounter in order to tame them and add them to your arsenal. This mechanic adds a very Pokémon like feel to the game, but distinguishes itself with the following differences:

Your mirages level up and gain SP, which can be used to unlock new abilities on their unique mirage boards (reminiscent of the license board from XII).  Some mirages have abilities that lend themselves to you in the field, such as the Chocobo and Floating Eye. The ability to explore with iconic creatures at your side was an awesome touch.

In combat we see the resurgence of the Active Time Battle format, with a few new twists that really spice up what you may remember from Final Fantasy IV through X.

Lann and Reyne are able to change their size freely between battles, which adds a layer of flexibility to how you fight. World of Final Fantasy adds a stacking mechanism into the mix that allows you to bolster your stats and unlock more powerful abilities.  Your stack has a stability rating and if you aren’t conscious of this, your allies will fall and be stunned for a short time.

The huge variety of enemies you are able to imprism ensures that you will never be without a combination to overcome any foe, provided you invest the time in collecting them.

If the full game is able to maintain the same level of energy, wit and charm as the portion of the game I was able to play, Square Enix will have a winner on their hands. It is nice to see that director Hiroki Chiba has taken on board the challenge of bringing a lighter game to life while maintaining his knack for creating a great story.

I feel like this game will definitely be able to appeal to younger generations of Final Fantasy fans, while exposing them to older elements of the Final Fantasy universe. The Chibi element of the game is a well thought out tool to assist with this exposure. I was a bit wary of it initially, but now that I know it isn’t simply a cosmetic element of the game, I’m sold.

Get another glimpse into the magic of this title with the trailer below if you missed it (I’m sure it was an accident) or just refresh those neural pathways. Every time I watch it I get shivers of anticipation. October 25 is just around the corner, and I know for a fact that this will be the game to tide me over for November and really give my Game of the Year nominations a shake up.

A big thanks to Bandai Namco for letting me spend time with them here in Melbourne, previewing World of Final Fantasy.