Won’t someone PLEASE, Think of the Children? A preview

“Oh won’t someone PLEASE think of the children?”

Sav: Jen and I certainly channeled some Simpsons when I came over to settle down and play Jammed Up Studios’ beta game, ‘Think of the Children‘.

Think of the Children is a party game around the idea of trying to wrangle 6 self destructive children while managing parenting tasks. Sounds terrifying right?

Dinner was ready, the barbecue was on fire and all 5 of our children were dead in increasingly funny ways.

At first glance, this is a game that will single-handedly help support the contraceptive industry. Children trying to run into traffic? Eating poisonous berries? Getting carried off by dogs? My blood pressure was rising just thinking about it.

I’m not a stranger to kids, I used to babysit, I’m an uncle, kids on public transport really love my hair, etc. But the cold sweat that came on when we started the game was unlike anything else. It was like I’d just been handed a six pack of eggs in a hammer testing factory.

I wasn’t ready for fatherhood. I’m 23, a simple games developer who’s only useful information to children would be “Listen. Listen. You know when splicers jump out at you in Bioshock? Their first shots always miss to give you an idea of where they are. No you may not have a juice”

So Jen booted the tutorial for me, to ease my sudden parental woes and also existential dread about my life.The tutorial was simple and really helpful. Pick up child. Yell at other child. Put in car and buckle up. Easy, yeah? I relaxed.

Then we tried the first level.

It was chaos. It was hard. It was stressful. So, like real kids! Jen first played it on her own and I have no idea how she did it. The main idea is to stop your kids doing dangerous and then life threatening things, while still preforming tasks.

We were running around like maniacs. There was a lot of yelling involved. Housemates were startled. All of our kids died the first three times. I accidentally threw a child INTO the street where it got run over. All burgers burnt.

It took a fair few goes, but we settled into a rhythm eventually.

For the park we were flipping burgers, setting up picnic tables and putting up a piñata.  The piñata I think was a really nice touch- or the idea behind it.

On two of the three levels there’s a task you do that all kids will flock to for a short period of time. The piñata is one. Ice-cream at the beach in another.

It’s a weirdly accurate break from the kids. The feeling of relief of getting them all to do something at once without dying is pretty much exactly the same as real life when a kid settles into a quiet and non destructive tasks for a while. It was really really nice.

It also gives you time to do other things,  like oiling up grandpa or cleaning up a spill at the grocery store.

Each level was graded with an A, B, C system, though somehow you can still pass even if you kill most of your children.  Don’t get me wrong, I like that. There are usually additional tasks or things to watch for as well in the rating system, like an ’embarrassment meter’ at the shops, or tasks that must be completed to succeed.

As a nice little touch, one of you gets a ‘best parent’ award, as well as some pretty fun achievements like- ‘threw the most children’, ‘ran around in circles the most’, ‘the most stylish’.

We played each level about 10 times. The first few times we were abysmal, but it’s definitely a game that you get better at once you start developing strategies. 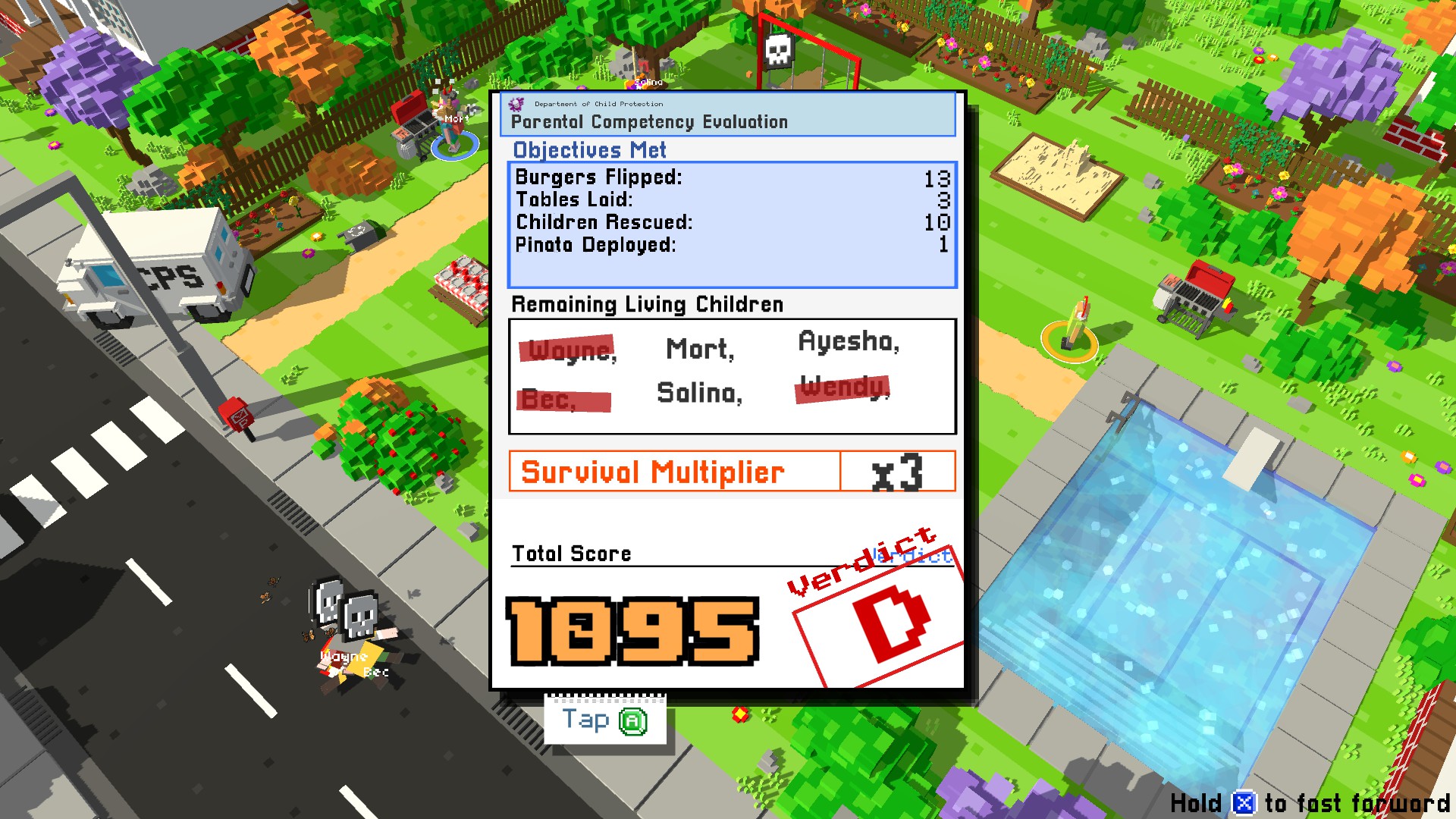 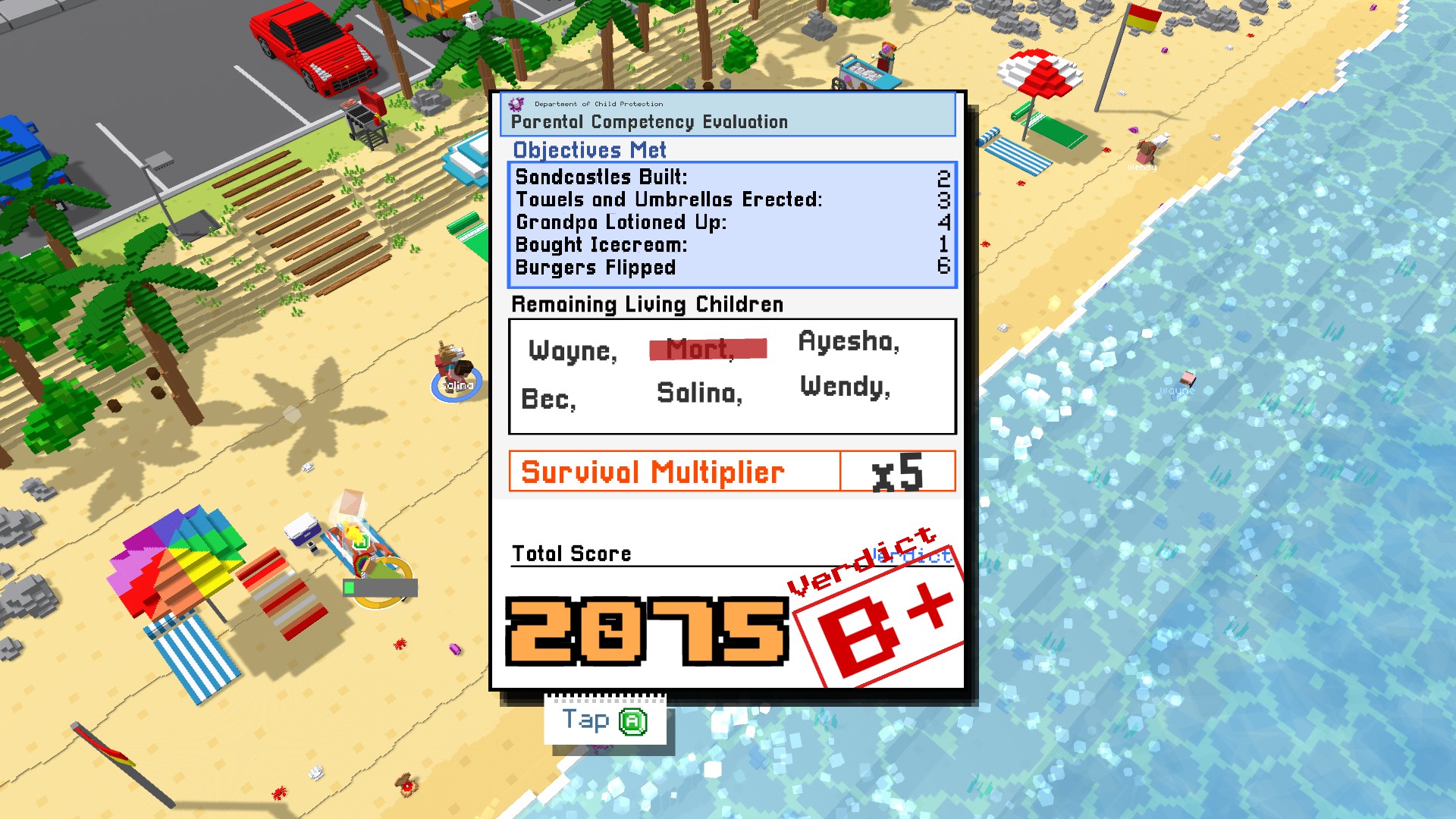 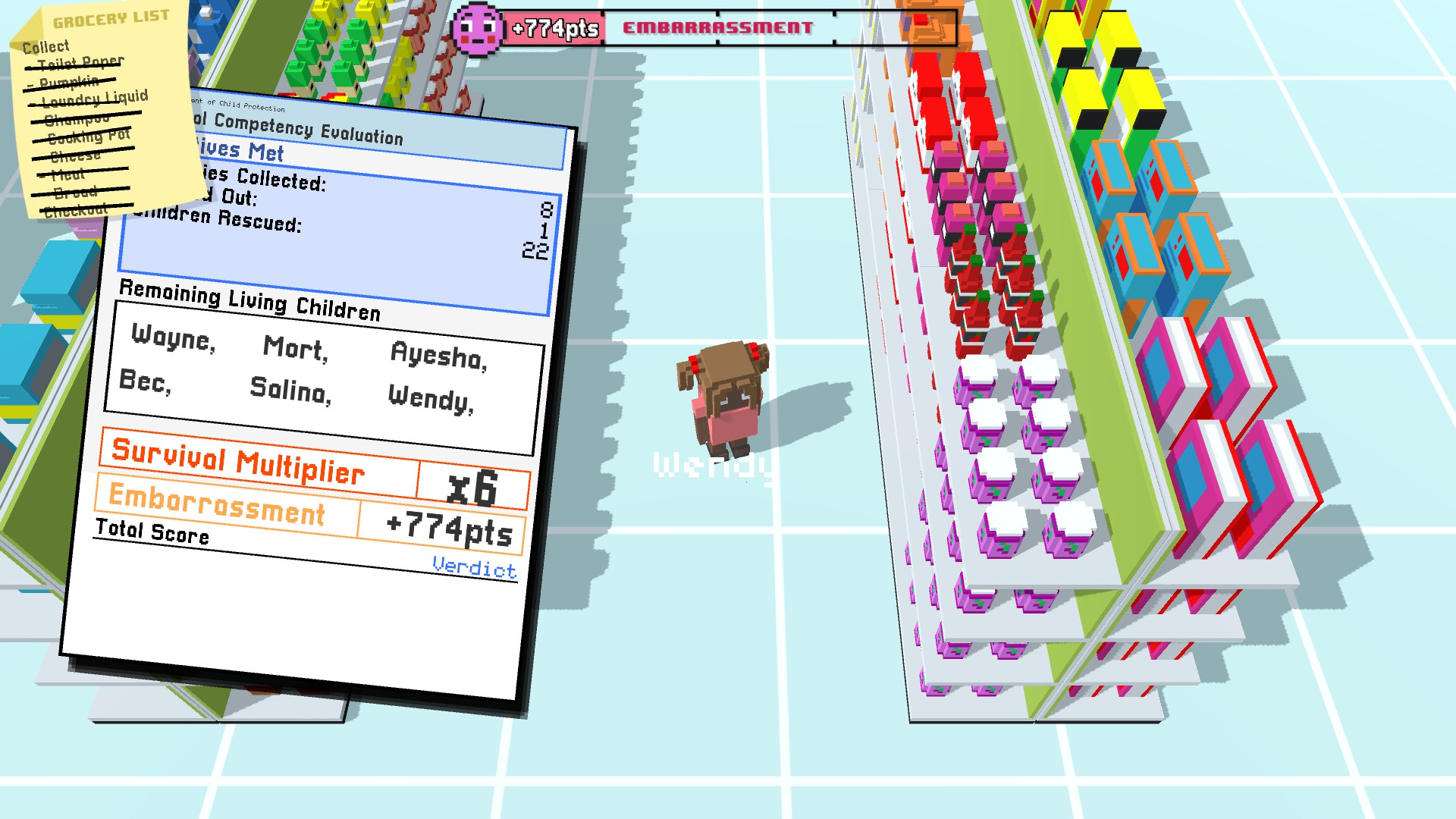 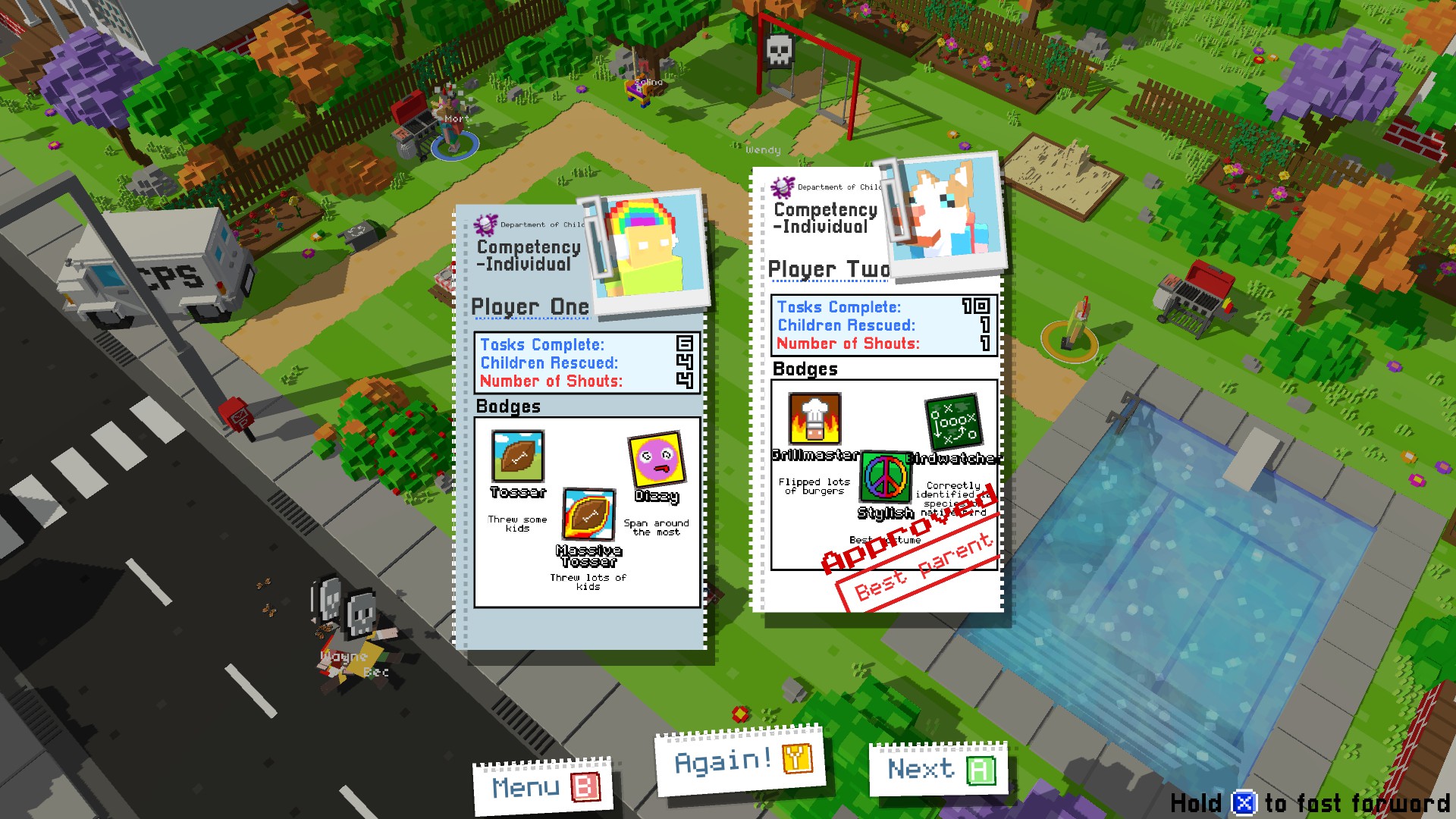 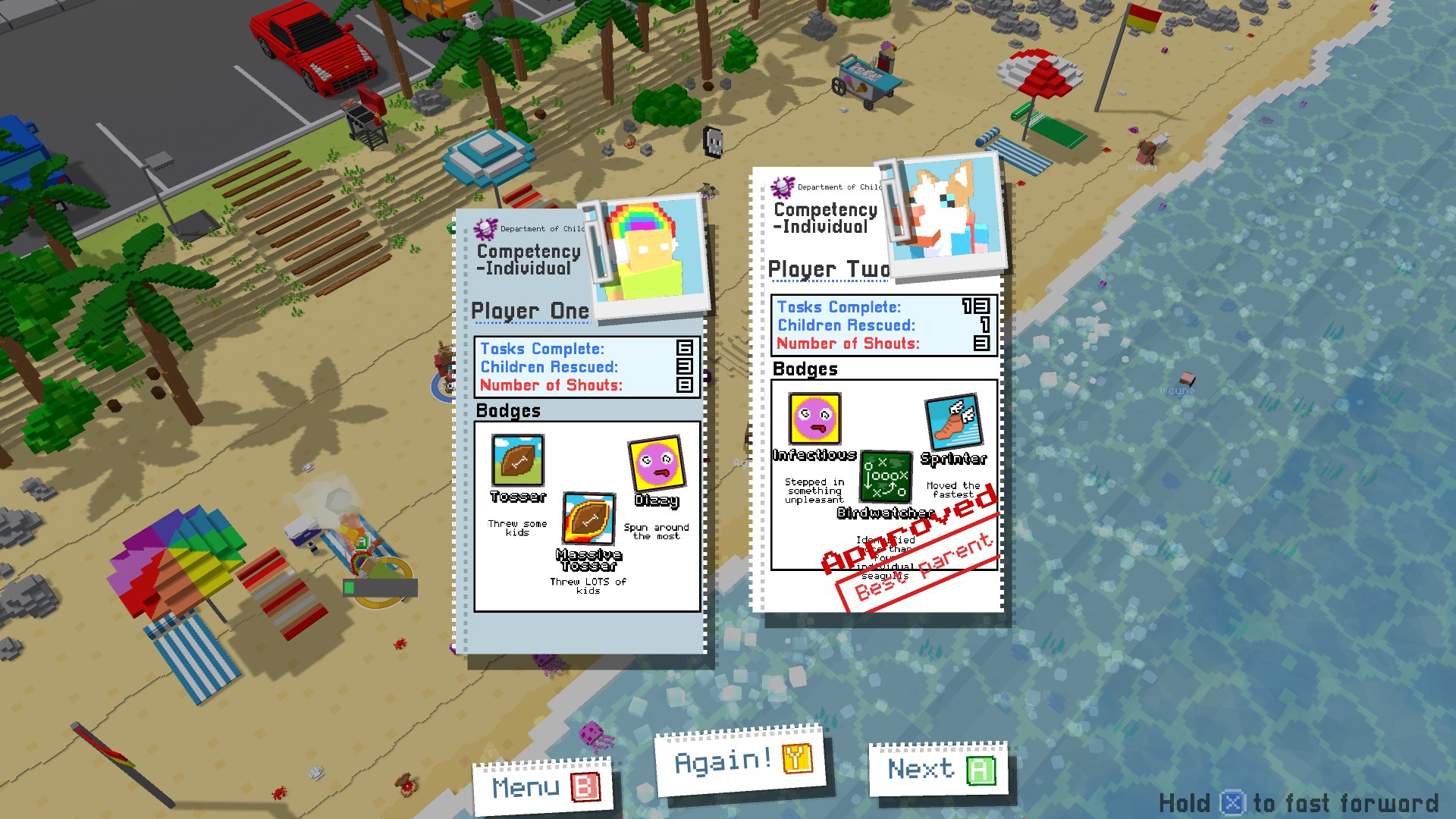 I mean, the other reason we kept playing so much was because I really really like unlocking cool hats.

The unlocking system felt a little clunky, with each rating (A+, A, B+) needing to be achieved. Once you’ve achieved a certain grade, you spin a wheel and get one of the 0- 5  items on that rating.  So it takes a while, and you have to start intentionally playing bad.

Which, incidentally, is still a lot of fun with a few people playing.

The designs of each of these little unlocks were really sweet though. They were themed to the level, and I am always a sucker for character customisation.

On a side note, most of the designs were really sweet. The levels were clearly laid out and had bright engaging colours (check that rainbow umbrella!). I’m always a fan of the pixel style, and I think it really worked with the overall aesthetics and flow of the game.

Nothing was too distracting, but everything was clear in what it was. And, there’s a customisation screen for your adults and children!

“I love our queer polyamorous family who have  adopted five regular children and one small balding man. “

That’s how we ended up with our balding little child Wayne. You get to dress them up in items you’ve unlocked, plus a sizeable amount of options already available to you.

Think of The Children was probably at its best with three of us playing. I remember at one point saying something along the lines of “I love our queer polyamorous family who have adopted five regular children and one small balding man. Would you mind throwing Wendy at grandpa for me? I’ve gotta go oil him.”

Jen:  I made the mistake of playing solo the first time, and that initially tainted my view of the game.  I booted up the game, didn’t realise there was a tutorial, and started on the last level which is arguably the most complicated.

Lacking the camaraderie of sitting next to a couple of friends, full of laughs and chaos, I found myself playing an exercise in frustration.  There were too many things to concentrate on at once, I didn’t know the controls, and the whole time I was watching my points tick down until I failed the level.

Playing as a duo was a LOT better.  It really highlighted the cooperative nature of the game.

We divvied up the challenges so that one of us was mostly responsible for herding the children away from trouble whilst the other focused on the map’s various tasks like collecting groceries, putting sunscreen on granddad, or flipping burgers on the BBQ.

“Add in my partner, and that aura expands into something that fills the whole house with shrieks of laughter.”

Plus, there’s something about playing next to a friend that creates an aura of mayhem and wackiness.

Add in my partner, and that aura expands into something that fills the whole house with shrieks of laughter.

The three of us playing have been friends for years and this game tapped into an amazing insanity that we seem to possess when around each other.  It was the most fun I’d had in months.

Unfortunately, having 3 people made the game very easy.  We worked out a system where I was on the map’s tasks again, and my girlfriend and Sav would just herd the children into a corner and continue to yell and throw them there until the map timer was up.

I think that, given the size and complexity of the levels, 2 or maybe 3 players is the sweet spot.  Anything more than that makes the game very easy and it starts to lose that element of fun.

Sav: I definitely think if we were to go solo with it, an AI system would be great. God I was anxious for a lot of it. It would have been nice if the game scaled difficulty with how many people were playing, or if it did already, it should be easier to notice. But all in all, with more people as a party it really ramped up!

Overall, Think of the Children was an exercise in the insane. In a good way of course. With a bit of a clunky start from both Jen and I, once we settled into a rhythm with enough people, it provided the kind of erratic and manic fun I always crave from party games.

It was very cute, a little frustrating at times, and very funny. I definitely plan to get it when it comes out in full, and  finish it off with Jen and her partner. It can be really hard to find good local co-op games, even harder to find ones with more than 2 players, but Think of the Children scratched that itch for us.

You can find Think of the Children on Steam or on their website. It’ll be coming to PC on the 31st of December this year, so keep an eye on it!