Warhammer Underworlds: Online delivers an experience on par with its cardboard counterpart. During an interview with the community manager at PAX Aus 2019, it was mentioned that the game aims to be a faithful adaptation of the tabletop experience. And, while still only in Early Access, this is something the game achieves in spades.

The game is set during Warhammer’s ‘Age of Sigmar’, in the city of Shadespire. It’s a city cursed with unending undead summoned by Nagash, the first necromancer. The city holds untold riches for the enterprising looter, but should they stray too far in, they will become trapped in Shadespire’s ever-changing and mist-drenched labyrinthine streets. Unable to escape, the looters partake in a cycle of war and death without end, all to the amusement of Nagash. With lore like that, it’s safe to say that Underworlds is one of the more interesting parts of the Warhammer franchise, and the game capitalises on that heavily.

The graphics take a very theatre of the mind approach; everything looks how you’d imagine it to. Each hex map is lovingly rendered, adding in the appropriate detail. The surrounding architecture is grim and gothic. Each warband looks and feels unique in how they move and attack. There’s also a slight plastic sheen to the units that give them a ‘toys-to-life’ feel.

The game’s visuals all come together seamlessly, creating an experience that oozes with style. Each battle feels epic yet trivial, like your warbands have come across each other in some fog-soaked corner of Shadespire and are partaking in a dance they’ve done before, and will do again. It all feels very ‘peak Warhammer’, and that’s definitely a good thing.

Speaking of warbands, there’s a good selection on offer. Each warband plays just different enough to provide variety, but not so different as to require a learning curve. First up are Steelheart’s Champions. They essentially act as the introductory warband. They’re easy to play, easy to understand, and easy to enjoy. Magore’s Fiends are for players that enjoy super aggressive gameplay. They hit hard and are geared towards maximum carnage. Sepulchral Guard, with seven units, are all about board control and require a little more strategy than the rest. Although my personal favourite is Ironskull’s Boyz. They’re big beefy Orruks that are built around simple tactics and fun combat.

The gameplay is a unique mix of card game and tactical skirmish. It’s pretty much a one for one adaptation of the tabletop game, but I’ll give a brief description for those who haven’t played it.  Each player has three to seven units, depending on warband, and a deck of 32+ cards; 12 objectives, 10 power cards, and 10+ equipment cards. Each game consists of three stages. 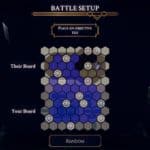 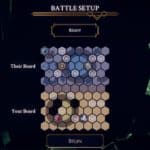 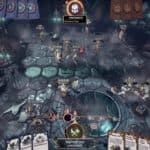 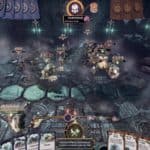 And because there are cards, that means there’s also deckbuilding. It’s a great way to customise your experience and tailor a warband to your playstyle. Deckbuilding can be arduous – it’s always hard to know exactly what cards work well together, and to tweak your deck in just the right way so you’re not getting screwed over by RNG. Once you get used to the game, it becomes easier to see what works and what doesn’t.

Of course, with every card game, there is a meta. And at the time of writing, that meta seems to be working in favour of the Sepulchral Guard. Almost every opponent I went up against in ranked were using them and running the same deck. While nothing new (you see it all the time in games like Magic: The Gathering), it was still frustrating. Though maybe I’m just mad that ‘ma boyz’ kept getting their green hides handed to them.

If there’s one thing that really impressed me though, it’s the dev team. Not only are they dropping near weekly updates, full of new features and tweaks, but they’re also taking the time to listen to their community. Using Discord, they’ve fostered this amazing community of players; one they’re constantly engaging with and moderating.

Overall, my experience with Warhammer Underworlds: Online has been a positive one. As a long-standing fan of Warhammer, I know that often games using the license can be hit or miss. Most of the time the games put out aren’t very good. But here I can safely say the franchise is in good hands. Even though the game is only in Early Access, developer Steel Sky Productions know what they’re doing, and it shows.

This game takes me back to my days as a raggedy teen, huddled in a scout hall, waging war and rolling dice. Moving my dwarves though the alleyways of Mordheim and marching my greenskins through rolling fields as they take on the Empire’s finest. It honestly makes me want to get back into tabletop Warhammer. Although considering how much that costs these days, perhaps I’ll stick with the video game.