Humankind Hands-on – A worthy contender in the historical 4X genre

Players who have already pre-ordered the title recently got the opportunity to try out Humankind’s work in progress build called Lucy OpenDev. Lucy OpenDev gives people a sneak peek of what the complete game might look like and what the core mechanics of it will be. We were lucky enough to have the opportunity to test out the build for ourselves and see how Humankind is coming along.

The Lucy OpenDev build lets you play through a scenario starting in the Neolithic era and ending in the Early Modern era. Practically, this means you get to play through the game’s first 150 turns. This makes for a sizeable scenario that’ll take you through five different eras of the game: the Neolithic era, the Ancient era, the Classical era, the Medieval era, and the Early Modern era.

When I first started my playthrough, I was struck by how similar the game looked to Civilization; you start a game with a single unit to explore your surroundings and, just like in Civilization, the map is laid out as a beautifully detailed grid with hexagonal squares that you can move your units across. As you start the game, the map is obscured by the fog of war, and as you move across different tiles, you gradually uncover more and more areas on the map. However, unlike Civilization, you don’t pick a civilisation to play as right away. Instead, every player starts as a generic Neolithic tribe. This means that while you can uncover areas on the map, you’re not able to build cities in the first era.

The game does, however, let you set an ‘outpost’. Similar to the expansion mechanics in titles like Age of Wonders: Planetfall, an outpost allows you call dibs on a chunk of territory once you’ve discovered it. When you hit the Ancient Era, you can convert these outposts into cities, which will then effectively add the marked territory to your empire and expand your borders. Converting outposts to cities does take a number of turns and, considering outposts can be destroyed quite easily by a rival player or AI, I found this a great way to heighten the stakes when it came to empire expansion.

So, what’s the aim in the Neolithic era? Mostly, hunting animals and discovering as many wonders and landmarks as you can. While hunting gives you with extra food that in turn allows you to grow your tribe, discovering important landmarks can earn you era stars. In later eras, these stars are awarded for more traditional goals in the 4X genre: expanding your empire, having a wealthy treasury, or expanding your military. 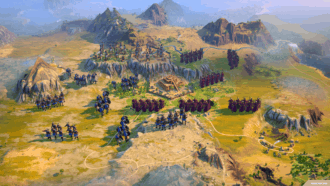 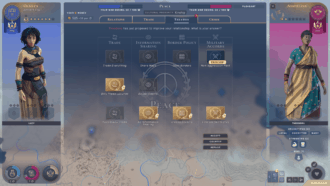 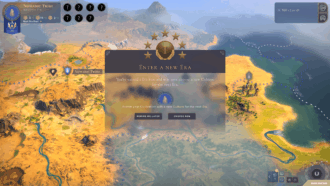 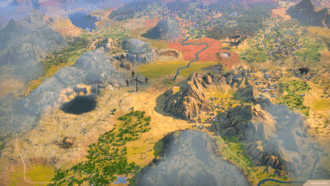 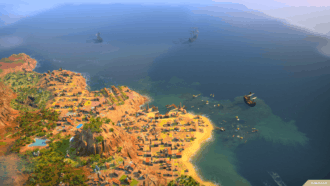 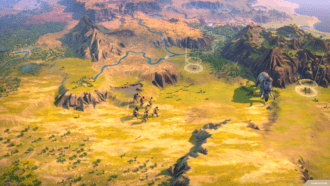 The more stars you have, the higher your level of fame is. Fame is undoubtedly the most important currency in Humankind and is where the title distinguishes itself from Civilization. Unlike a playthrough in Civilization where there are multiple kinds of victories – through military dominations, science, culture, and so on – Humankind has only one unified victory condition: to be the most famous culture at the end of the game.

“…the path to victory is a lot more dynamic.”

Despite this, the path to victory is a lot more dynamic than in Civilization. Rather than having one strategy that sees you through all the way to victory, you’ll have to adapt your playstyle with each new era. The reason for this is simple: with every new era in Humankind, you need to choose a new culture to play as. Each era comes with ten unique cultures to choose from, each with their own advantages and drawbacks. For example, when I hit the Ancient Era I chose to play as Assyria, a merchant nation that gets a map movement bonus. Afterwards, when I hit the Classical era, I went on to play as the Romans, which came with different bonuses.

What makes this system really exciting is how your choice of cultures throughout the game impacts the accrual of bonuses. The emblematic quarter feature is a good example: each culture has the ability to build a unique quarter in their cities, which generates a bonus. These quarters will keep generating the same bonus all the way through the game, no matter the era they were originally built in. Depending on what cultures you choose in each era, you’ll have to combine different cultures’ emblematic quarter bonuses in ways that make sense strategically. In addition to this, you’ll have to collect era stars by completing challenges specific to the era you’re in and the culture you’re playing as while you progress through the game.

All in all, Humankind’s Lucy OpenDev scenario offered plenty for me to get stuck into. Judging by the first 150 turns in the game, Humankind is going to offer a unique take on the historical 4X genre that could give big games like Civilization a run for their money. While on the surface, Humankind appears to have a lot in common with Civilization, this notion was dispelled once I got a look under the bonnet at the game’s mechanics. The way Humankind mixes things up by introducing its unique culture mechanics makes for an endless amount of culture combinations within one playthrough and makes the game more fast-paced, too. If Humankind keeps improving on its Lucy OpenDev build, the end result will surely be impressive.

Humankind is set to release in April 2021.