I love my VR titles. So, when VR Corner, our recurring VR feature came to fruition I was excited. With a shiny, only weeks old Oculus Quest 2, I was itching for some new (at least to me) experiences, outside of my previous PSVR history. Little did I know one of the games that’d stick so well is Angry Birds VR: Isle of Pigs.

Isle of Pigs takes the popular (and frankly quite enjoyable) gameplay formula of using a sling shot to destroy structures that pigs reside in, using ammunition in the form of birds. This is Angry Birds, its a narrative free game with a tried and true long running series. You know what’s up.

With almost twenty mainline series entries, that’s all this game needs to be: finding a way of making the previously 2D gameplay fit into an augmented or (in my case) virtual reality setting. It does work and it works quite well admittedly. Across the game’s large series of levels on offer, I found myself transported back to just over a decade ago when I was first introduced to the series. All these years later, exploring the game in a new dimension and just about every other prior franchise entry missed, great joy and nostalgia was provided to me in Isle of Pigs.

While they’re nice and very welcome, sometimes you don’t need the serious, heavy hitters of VR such as Half Life: Alyx. Maybe you just need a good, fun game to switch off to and enjoy. Maybe, you just need Angry Birds.

Not too much has been mixed about in Angry Birds’ jump to virtual reality, just that you’re now in a 3D space, firing off birds in first person perspective. Now, you’re also closer to simulating you firing the slingshot. In my case this saw me holding down the trigger button on one of my Quest controllers, with the other held close behind, controlling the tension on the slingshot. Pull the behind controller further back and your shot’s guiding lines indicate it’ll be more of a straight shot rather than an arched trajectory. With thousands of VR archery games now on the market, simulating the tension of firing a projectile from a weapon wasn’t ever going to be a difficult task in Angry Birds’ case. Still, it manages to be responsive, satisfying and easy to pick up in its controlling. That’s always a relief.

What I really like about this VR venture is that there, more than ever, seems to several viable means of tackling a level. Taking down structures, knocking out those dastardly green pigs always has been a balancing mix of trial and error and familiarising yourself with the physics of Angry Birds. Now, each level also offers multiple spots you can teleport to, each providing different points of perspective on the structures you’ll face. Sometimes a high angle approach will allow you to see one foundation particularly vulnerable, likely to cause a domino effect. In other cases, a giant dynamite box is hidden just out of view until you teleport behind, getting a free and easy lined up shot to see everything blown to smithereens.

“What I really like about this VR venture is that there more than ever seems to several viable means of tackling a level.”

Add on top of this the returning variants of birds, and there’s surprising amount of strategy to find in toppling structures. Sure, the stock standard red bird can do the job a lot of the time, but it doesn’t end there. Chuck, the yellow bird, is effective in being launched with greater speed, taking down that one pillar that’s holding everything by a thread. The blue bird that in a button press mid flight can break itself into three smaller birds, is great at hitting several weak points at once. If all else fails, the explosive Bomb bird can really do some damage upon impact. This is certainly messy, but the point stands it is still quite effective in getting the job done.

There’s also a level builder on offer in the game. It’ll provide you plenty of means to mess around in if you’re the creative type. I haven’t really seen this in an Angry Birds title prior, and I felt quite welcome in that regards. Different assets in the form of blocks, placements of pigs and so on can be manipulated in here and my brain’s already reeling with all the possible creative solutions players have out there.

I don’t need to tell you that Angry Birds VR: Isle of Pigs isn’t a graphical powerhouse. You know this and I’d be lying if I tried to say otherwise. However it doesn’t really matter; this is a franchise that has its cartoony art style nailed down to a tee. Naturally, the games have more and more leant into the art style that they’ve carved in the surprise hit Angry Birds movies.

A lot of Isle of Pigs is also holiday themed. Bright beaches and cold ice-scapes are just some of the environments you’ll see in the game. Some of these themed areas also come with other physics uses. The ice levels in particular can sometimes see pigs sliding on ice blocks if given the slightest nudge. These blocks are also as fragile as glass and are knocked out very easily. Hell, there’s even a party, dance floor themed environment and a spooky one, with monstrous variants on the pigs.

All in all, the game looks solid enough on my  Oculus Quest 2. Sure, you’re very aware throughout every level that you’re in a very staged area. It doesn’t really matter however – the thrill of the bopping soundtrack, themed environments and satisfying gameplay of eliminating those wicked pigs all but makes up for it. 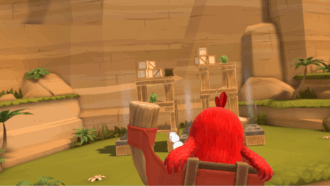 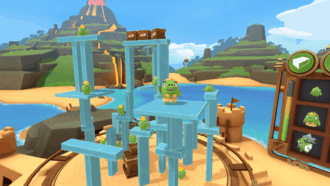 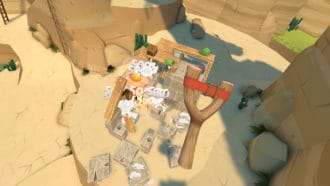 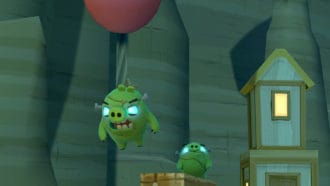 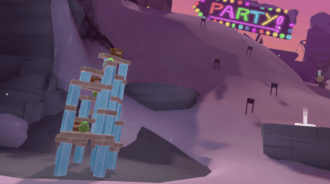 Really, Angry Birds VR: Isle of Pigs is a hard VR experience to fault. It does well in translating the beloved decade old franchise format into a new light. Sure, it’s not mind-blowing or an invigorator for the series but the arcade fun of manipulating structures falling to eliminate pigs is still as fun as ever. While knowing its scope and not remaining too ambitious, it also comes a more affordable price tag of $23AUD on the Oculus Store. Considering all the exorbitantly priced VR titles out there that are far less bang for for buck, you could do a lot worse with a new Angry Birds game in your library.

Angry Birds VR: Isle of Pigs is available now for Oculus Quest – check it out.