Diablo 4 – Everything you need to know from BlizzConline 2021

Diablo 4 got the spotlight during BlizzConline 2021, Blizzard’s virtual edition of the popular BlizzCon event. Throughout the weekend we heard about World of Warcraft Classic’s new DLC and the official reveal of the Diablo 2 remaster. However, one of the biggest parts of the event was the huge development update on Diablo 4 including a new class, PvP, and the open world.

We were lucky enough to sit down in exclusive Question and Answer sessions with Lead Game Designer Joe Shely and Art Director John Mueller to speak in-depth about what fans can expect from the next adventure.

The weekend began with an impressive reveal of the Rogue class, a mix between Diablo 2’s Assassin and Diablo 3’s Demon Hunter class. They are an expert in both ranged and melee combat and will satisfy players looking for diverse play styles. A cinematic trailer with and gameplay deep-dive shows much of the class’s lore and key mechanics.

Joe Shely explained the Rogue class hearkens back to the history of the entire Diablo franchise. They wanted to capture a character for players who want to get in close, stabbing monsters in the back and dashing around areas swiftly. They wanted to have a class standing at a distance, firing arrows and slowing monsters with caltrops and magical tricks. The Rogue ends up being the perfect meld of the two and something the development team is very proud of.

The team behind Diablo 4 are focussing on “returning to darkness”. As seen through the Rogue cinematic trailer and the muted and darker colour palette of the UI, the tone certainly speaks more to a gothic vibe. There’s a distinction now between Diablo 4 and Immortal, where the direct sequel reflects Diablo II’s atmosphere and the mobile game matches the colourful nature of Diablo III. As result, there is a style for everyone, no matter where your opinion falls. 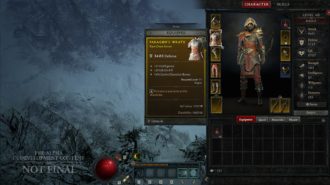 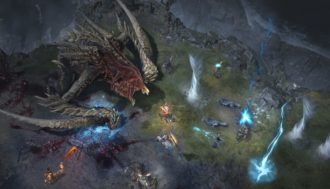 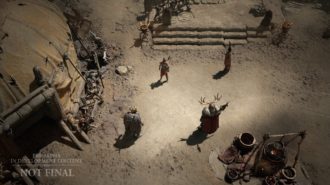 Delving into a dark, open world

A diversion from the formula Diablo 4 introduces is a continuous open world. The development team want to achieve an MMO approach with the sequel, including public events and PvPvE combat.

Sanctuary is now a hub for all players. Mueller says since this is the first time Sanctuary is designed as an open space, exploration will be a big change to the Diablo franchise’s gameplay loop. Players use their mounts to travel between areas, transition into combat, and show-off their experience in the world.

The open-world isn’t purely a design decision. Since the last game, 90 per cent of the world’s population has been annihilated. This universe is now broken, with encampments and factions of survivors fighting across different areas. The freedom of the continuous world represents the even harsher nature of this new land.

“Everything has a place now, so the history, the lore, everything you’ve heard about Diablo, it’s no longer just a 2D representation that you click and go to a map. You’re traversing the space on your horse, and it’s a really different kind of experience. I think for the genre and for Diablo players, I know it’s something people are going to enjoy.”

PvP and the Fields of Hatred

Player-versus-player (PvP) gameplay is back in Diablo 4 and BlizzConline 2021 has finally given fans a better understanding of how it all works.

Like Runescape’s Wilderness or The Divison’s Dark Zone, Diablo 4 will feature PvP dedicated areas in the open-world called the Fields of Hatred. Here, adventurers can attack each other while fending off strong AI enemies. Shards of Hatred drop within this zone, which can provide unique gear after they are purified.

Purifying Shards of Hatred is a risky process. Players need to take the items to a particular part of the Fields of Hatred and survive relentless waves of mobs. This action is marked on all players maps, leaving the purifier vulnerable to both monsters and sneaky players looking for some easy loot.

Game Director Luis Barriga says the idea is to encourage players to be aggressive, building tension and excitement within the world with a high-risk, high-reward challenge. On the other hand, being a tyrant puts a big target on an adventurer’s back. It’s like a “cool cat and mouse game but if you’re the shark and go hostile, killing players for long enough, you become the Vessel of Hatred and it becomes harder to maintain”.

While this raises concern about players with insane gear and levels grouping up to grief and farm these shards, the developers reassure that they are considering this as the game progresses. Loot from PvP will primarily be cosmetic, which will support fairer play. However, a question about having ranked PvP was dodged in our chat.

Playing hardcore has its niche audience and they are always dying for more information. Chatting with the developers, we now know that hardcore characters will have plenty more mechanics and incentives.

Network disconnections leading to unavoidable deaths and a loss of hundreds of hours into one character has plagued hardcore players for the longest time. The developers are considering ways around this and may have a solution with the Scroll of Escape.

The Scroll of Escape is a super-rare consumable that can be used by hardcore characters, teleporting them elsewhere. Suppose a player has one of these on them when they unfortunately disconnect. In that case, it will automatically be used and transport their character somewhere safe. We didn’t see an example of how this works as its still a feature in development, but it’s a real saving grace for many hardcore fans.

Accessibility in games is a strong focus across all development in the last few years. Recognition as a critical feature is impressively growing. Shely and Mueller had some information to share about their focus to improve Diablo’s features.

Diablo 4’s development team is making it the most accessible game in the series. The more straightforward colour palette not only serves as a return to the darker tones of the series but as a way to support colour-blind and visually impaired players. The UI is cleaner and they are making other improvements to accessibility that they’ll share via development blogs soon.

There is always going to be more Diablo 4 information on the horizon. Thank you to the development team for answering our questions. We are looking forward to sharing more details about them and playing Diablo 4 when it releases on PC and consoles.