The escape room concept, complete with its various puzzles and mechanics seems like a natural fit for VR, so it’s no surprise that plenty of developers have taken on the task of putting their own spin on the genre. Flow Weaver is the newest to attempt this, with the unique twist that you are not just escaping one room, but rather a room that is accessible through different environmental realms that all connect through mystical means. It’s a compelling concept for a puzzle game, and while Flow Weaver looks nice and has some interesting ideas, it mostly left me feeling frustrated and honestly a tad bored due to its finicky design choices and overly-chatty protagonist.

Conceptually, Flow Weaver starts out strong. Bound to a room (and to the one spot in that room), all you have in front of you at the beginning of the game is the ability to flow weave; that is, to move between other available dimensions, which layer on top of each other in order to solve puzzles. For a simple early example, a locked chest in one realm can be propped open in another in order to access it across both. The concept plays out as you unlock multiple different realms, each with its own aesthetic and puzzles, and the game works best when you are bouncing between each of them solving riddles.

Of the five rooms that you’ll encounter, the puzzles within each are relatively short; in fact, you’ll only do a couple of things within each realm before moving on to the next. The game lasts a couple of hours, but only because there are so many points of the narrative that… force you to stop and listen. Whether it’s the particularly chatty protagonist who repeats useless hints over and over and just generally refuses to keep her inner monologue to herself, or when you uncover another piece of the narrative as to why you’re a prisoner in the first place – either way, you just have to sit and listen without being able to interact with anything. Other games mitigate this by letting you at least play with nearby objects in VR to pass the time. That’s certainly not the case here, and it makes progression feel tedious instead of exciting.

The ability to flow weave is actually pretty cool in practice. You choose the realm you want to travel to on your compass and then basically rip a thread in reality, with the new realm instantly appearing in front of you. It’s a satisfying effect that looks great on the Oculus Quest 2, as you seamlessly shift between realms that are all quite different in style. As you progress, you’ll unlock abilities that stack up in order to solve puzzles within each area. The first ability, Shadow Hand, is your standard “aim at an object and pull it towards you” mechanic that has become a staple in VR, but is useful in particular here given you don’t move from your same seated position in each realm.

“Puzzle games should be clever and make you feel clever when you solve their riddles, while Flow Weaver instead does things that force you to lose trust in the process.”

Other abilities allow you to communicate with animals, change the weather or even set things on fire, but each of these extra (and arguably cooler) abilities are only used maybe once or twice, so they don’t stay super relevant for long. While Flow Weaver has a great concept, the puzzles themselves aren’t super interesting, and are quite linear to the point where if you don’t know what to do, you just try and interact with things until it eventually clicks. You can press a button to meditate and see objects that are “magical”, which helps identify which ones can be manipulated, but everything else in the world is basically static, which means you can only move around objects that are useful to the solution. It doesn’t take long to figure things out; except for when a mechanic is made frustratingly unclear.

In one instance, I found myself in a hell-ish environment, with an inactive machine and a bunch of cogs that needed to be used to get it running. Annoyingly, there were other components of this puzzle that were pretty unclear, with items out of reach and just a general lack of hints that made any sort of sense. Puzzle games should be clever and make you feel clever when you solve their riddles, while Flow Weaver instead does confusing things that force you to lose trust in the process.

For example, one puzzle I was stuck on for a while simply didn’t trigger, until I reloaded back into the game (and re-did a couple of puzzles from right beforehand). Another time, an object that I was holding fell through the world and didn’t respawn, also forcing me to try it again with a game reload. It’s just not fun when you feel like you’re stuck and you’re not sure if it’s a fault with the game or just something you haven’t figured out how to solve yet. Oh, and when you reload and redo puzzles, that means listening to that long-winded dialogue again. Then, before you know it, it’s all over with a bit of a “meh” ending, I’m afraid, that didn’t seem worth the effort. 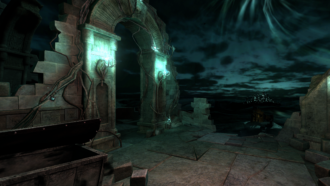 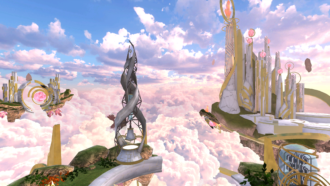 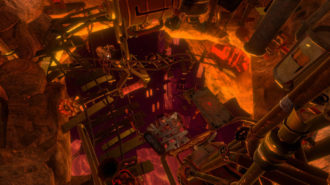 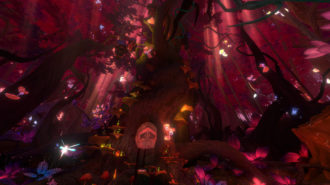 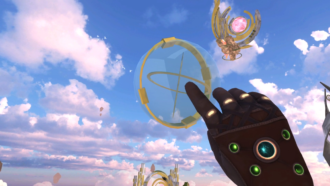 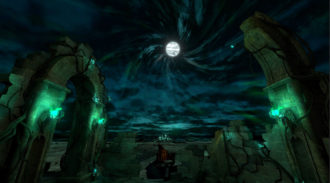 Visually, Flow Weaver is an impressive title overall. I like that each of the realms is drastically different from the one before it, and one puzzle in a sky realm is particularly impressive to look at with giant pieces floating around you. As mentioned previously, moving between dimensions by tearing a rift in the realm is a cool effect, and having the other locations appear seamlessly is a nice touch; there’s enough visual flourishes that make each area distinct, like a flying dragon off in the distance of one realm, movable machinery in another and fairies swiftly darting across the screen in front of you in another. At times, it’s gorgeous, and considering the lack of movement they’ve done an excellent job aesthetically, so it’s a shame the puzzle design and dialogue is so frustrating and forgettable by comparison.

Flow Weaver has a lot of potential, and there are some highlights, with some strong visual design and a few puzzles that are enjoyable as you get started. However, it quickly devolves into a frustrating proposition, with no clear checkpoint system, reloading to complete bugged-out puzzles with no hints and an annoying protagonist that repeats lines of dialogue like a broken record. I was looking forward to being charmed by this eccentric, clever puzzle game, but what it offers in theory is just not as intriguing in practice, and is best left for only those who are really desperate for a new escape room style VR game after exhausting all the other options.

Flow Weaver is available now for Oculus Quest – check it out.