GORN originally released in 2017, and is an over-the-top violent gladiator simulator in VR. It’s so far made its way to a variety of VR platforms over the years, starting off on PC, before hitting PSVR and more recently, Oculus Quest. Featuring a fully physics driven combat engine and a lot of cartoony-gore, it’s a bloodthirsty time that is very simple in premise and incredibly fun in execution. The real question of this VR Corner is does this popular brawler hit work well on the Quest today, with all its wireless freedom?

Wonderful in its simplicity, GORN features you, a gladiator, walking into an arena to battle against a bunch of brutes that get progressively more difficult in what is essentially a wave-based brawler. You’re given a variety of weapons to bludgeon your opponents with, while the crowd watches on in delight. There’s no story, no real essential setup or connective tissue that defines any of this; you just raise your weapon up in a hero pose when you’re ready to slay, and embrace the violent chaos that comes next.

With some VR adventures really doing an excellent job of setting up the story and the reason you’re playing, this simplified arcade approach might not necessarily be your cup of tea. It doesn’t take long to realise however that the true star of this gladiator arena is the combat that combines with the silly physics engine and ridiculous amounts of gore, which more than makes up for the fact that the story and variety are barely present.

The main goal of GORN is to provide fun, satisfying physics-based combat, and that’s exactly what you’ll get here; nothing more and nothing less. The enemies have this ridiculous ragdoll-physics style as they lumber awkwardly towards you, like big chunky rubber action figures. You get access to a variety of weapons to take them down, from your traditional axes, hammers, maces and even some crab claws, which are as delightfully silly as they sound, crushing skulls in your pincers. Due to its melee nature, GORN is a natural fit for VR. Flailing your arms about with a weapon in each hand, all you have to do really is move around, attack and block. Your only goal is to not die (which, given it only takes a couple of hits to take you down, is more challenging than it initially seems).

To begin with, GORN makes a strange first impression by movement being set to “grab the world and pull yourself forward with your hands” to get around the environment. I found this awkward at best but thankfully you can change to smooth locomotion as soon as the tutorial is complete. From there, it was straight to carnage. GORN wastes little time getting you into its main gameplay of littering the arena with corpses, blood and body parts, and using each weapon feels good. It’s hard to explain in words, but when you crack an opponents skull open with an axe and feel that impact, it’s very satisfying, unlike most other melee combat in VR I’ve experienced thus far.

“…swinging around to smash your axe through someone’s skull is going to prove risky in your home unless you have a rather large space to play.”

When it comes to VR titles, I don’t often have to warn people about the space they inhabit in real life. But GORN comes from a bit of a disclaimer, as the nature of pummeling opponents into the ground while watching their head explode does sometimes make you forget that you’re in VR, and forget that you have a guardian space around you that is meant to prevent you from punching walls, or worse, TV’s and other valuables. Because you’re fighting enemies from all directions, swinging around to smash your axe through someone’s skull is going to prove risky in your home unless you have a rather large space to play. It’s well-documented that I am a big guy, two meters tall with a large reach, and the risk of me smashing my hands into something in my living room prevented me from going “all in” on the combat, always a little concerned about where I was (and… maybe I punched the wall a little bit, just once).

It’s worth noting that GORN a bit of a work-out, too. I was exhausted after only 30 minutes or so, but small sessions could be the way to go here, as this violent brawler is actually repetitive once you’ve spent some time with it. There isn’t a large variety of game modes or even a huge variety in enemy types, and once you’ve ripped a foes arms off for the 20th time, is it still as fun as the first time? I mean, it’s still a little bit fun, but the shock value and impact is mostly lost. This is a very fun title to show off to your friends, put them in VR and have a laugh, but once you’ve played it for a couple of hours you’ve seen everything there is to see, and I can’t see it being a regular addition to your gaming routine unless it’s incorporated as part of your workout regimen. 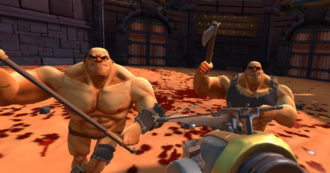 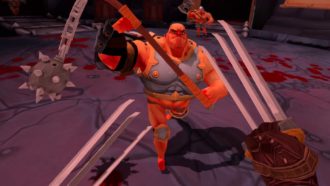 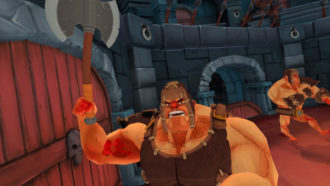 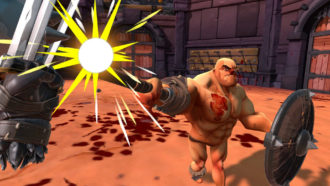 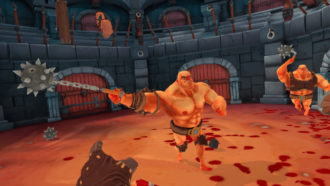 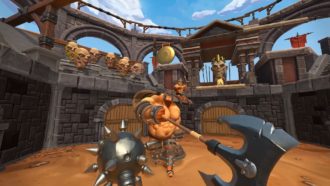 GORN’s visual style may prove to be a deal breaker for the squeamish, as the game doesn’t hold back on being incredibly violent to an almost laughable degree. Limbs get torn off, eyes pop out and hang from their sockets, bones crunch and blood squirts all over the place. If you lop off both arms of a foe, they’ll still lunge at you head first. There’s a real comedy to it that makes it feel more silly than gross to this particular gamer, but I do appreciate that I’m more desensitized to video game violence due to my love of horror and action games anyway. There is no music in GORN, the focus being the sounds of flesh ripping, heads splatting and eyeballs popping with the occasional roar from the crowd. High production values this is not, but it’s effective in its simple execution of its core concept.

For what it’s worth, GORN is a decent port all around compared to its counterparts. The cartoon art style means that it translates pretty well onto the Oculus Quest 2, and while it’s not quite as detailed as the PC version, the physics based combat feels as smooth as ever, and the ability to play a game like this wirelessly is an absolute godsend. Without the restrictions of wires, it’s easy to enjoy GORN as it was designed, as a bloodthirsty gladiatorial fighter that takes no prisoners. Again, just be careful of your surroundings.

At the end of the day, GORN sets out to be a silly, gory, kind of ridiculous gladiator simulator that has the main priority of its combat feeling good to play, and on that level it definitely succeeds. I’d even argue that the Quest version of the game is the best way to play GORN; despite the slightly lower quality visuals, losing the restriction of wires means you can really enjoy the game as it was intended, without limitations (as long as you have the space to accommodate). While fun and satisfying in short bursts, the content is kind of lacking, and you’ll have seen everything there is to see pretty quickly. Still, GORN is some of the most fun you can have in a melee fighter in VR, so you could do much worse than this violent gladiatorial slug-fest.

GORN is available now for Oculus Quest – check it out.