Competitive arena-based multiplayer shooters are certainly nothing new, but in the world of VR, they’re a genre that hasn’t necessarily been a resounding success. While there are military shooters that do a good job of replicating your Call of Duty style of play, there hasn’t been anything that feels fast and fun on an arcade level in the vain of say, Overwatch or Team Fortress 2. Enter Hyper Dash; after being available on Sidequest for a while, the popular team-based multiplayer shooter is now available on the various VR platforms, including Oculus Quest. Not only does it scratch that familiar multiplayer shooter itch, but it includes some of the slickest movement and gun-play I’ve seen on the platform altogether.

Hyper Dash has a simple set-up; there’s no story to be found here, just several arenas and the teams of Red and Blue fighting it out in a range of different competitive multiplayer modes. The core 5v5 team modes are all familiar for anybody who has dabbled in this genre before; Payload features an attacking team that must deliver an on-rails package to the finish-line by standing on it without dying while the other team defends, Domination is a battle to maintain multiple areas at once, Control Point has teams competing to maintain control over one area, and there’s a Mutators mode that mixes in random buffs and effects, like zero gravity or specific weapons. After each match, the server of players then votes on what mode they want to do next. There’s one playlist that’s a free-for-all team Deathmatch that is a bit less fun, especially when you’re starting out.

What sets Hyper Dash apart from its multiplayer shooter counterparts are the rails that are all over the map, designed to be grinded on, sliding around the environment slickly and quickly. Each map is designed with this traversal mechanic in mind, with rails leading everywhere; simply aim and shoot at one to teleport your movement, and you’re grinding away – hold down another button to move along faster. For me, VR shooters can sometimes be a bit fiddly when it comes to movement, and VR experiences on-rails are sometimes much more effective. This is the perfect solution, and means you can get stuck into the good stuff straight away.

Gliding around on rails is an excellent mechanic, and makes the movement in Hyper Dash always feel slick and satisfying. Interestingly, the movement in Hyper Dash is split between locomotion (where you can move regularly or sprint), the rails, and also the teleporting, which in this game is of course, dashing. The best players combine these three movement styles in short succession, which means there’s a bit of a learning curve as you get used to the way traversal works. Cleverly, dashing is fast and easy, and you can easily dash from solid ground, to a rail, to another rail or back to solid ground in mere seconds, which can be the difference between getting a kill or being eliminated yourself.

It can be a lot to take in at first, especially with other players dashing around you and taking you out before you even have a chance to aim your weapons. But once the pieces come together, it’s very effective and more importantly, fun as hell. You’ll always be dual-wielding as well, starting off with the two trademark handguns, with other weapons littered around as pickups, along with other power-ups like an extra dash or some health. There’s shotguns, rockets, automatic weapons, a shield and more; you can choose which one to switch out, which means you can dual-wield a mix of whatever you like too, making for some good strategical options. Shooting also feels excellent. It’s one of the few VR shooters I’ve played where I genuinely feel like my actions are translating directly into the game in terms of accuracy and bullets going where I expect them to. Reloading is just a button press instead of some arduous “realistic” mechanic; purists might scoff at this, but given the fast pace, it’s a blessing, trust me. It also has other nice touches, like when you’re capturing a point, you have to physically slam your hand down on the in-game button, which feels much more pointed than “stand in the zone until a coloured bar fills up”.

“…there are many moments that I experienced in my play sessions so far that kept making me smile and feel like a total badass at the same time.”

In my time with Hyper Dash so far, Payload has by far been the most enjoyable mode on offer. Trying to navigate the various paths of the map and inch closer and closer to victory as the attacking team is quite the rush, and teammates quickly band together to form strategies like in the best multiplayer shooters. One time saw one of my squad members dual-wielding two shields; they jumped on a rail and I placed myself so that I was sliding right behind them with dual rockets equipped. As we encountered enemies, the shields protected us, allowing me to pop up and pick them off while we were speedily grinding to the objective. It’s moments like that – and there are many moments that I have experienced in my play sessions so far – that kept making me smile and feel like a total badass at the same time. Despite me not being the sharpest shooter out there, the community itself so far has been incredibly friendly, and matches are still littered with more than enough memorable moments where my personal defeat didn’t even sting that bad.

With some very enticing and exciting multiplayer gameplay action, the rest of Hyper Dash is left feeling like more of an old school affair. There’s no party functionality that you’ll see in other shooters like say, Population One; instead, there’s a server list, with each one holding 10 players, and you join the slots available. There’s some Aussie servers which is actually fantastic, as anyone who plays shooters knows that those milliseconds of lag can make a huge difference. But joining servers in this way does feel a little bit archaic, and there are only a handful of maps and modes at this stage, which means it can get a little bit repetitive in longer play sessions. That being said, despite the lack of options in maps and modes, the actual design of each map has been meticulously pulled together to truly take advantage of the unique movement style that Hyper Dash represents. 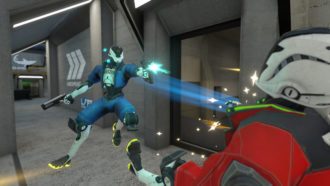 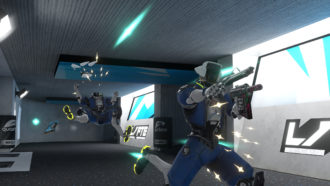 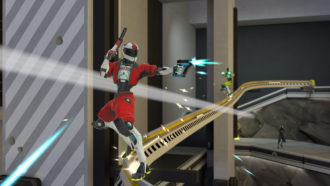 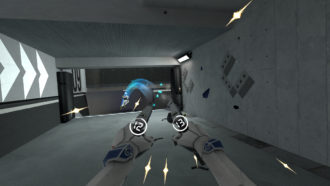 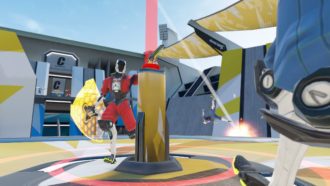 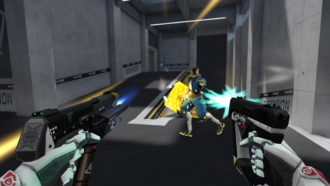 The aesthetic is a lot of whites and greys with some dashes of colour that make up the map designs themselves, which in a multiplayer shooter such as Hyper Dash means the weapon drops and opponents with their bright red and blue outfits, along with points of interest like objectives, really stand out clearly against these clean, crisp backdrops. It makes it easy to make snap decisions and spot enemies in the distance. The shooter also has some really banging tunes. The developers clearly know this, because you can change the music track like a playlist whenever you want mid-game, and I already have some head-bopping favourites that help pump me up as I’m shooting down foes. Overall, it’s a very good looking game on my Oculus Quest 2 and keeps things from being visually cluttered while sounding stellar.

Hyper Dash brings old school arcade multiplayer sensibilities to the table and mashes them up with some of the most enjoyable and fluid movement available in a VR title. Grinding on rails while shooting down opponents is undeniably cool, and makes for some great memorable moments. While its online infrastructure is admittedly a little basic and the variety of modes isn’t expansive for now, the addition of local servers, the fact that the maps are so well-designed and the modes themselves feel balanced more than makes up for any shortcomings. For my money, Hyper Dash is the best shooting experience available on the Oculus Quest so far, and I can’t wait to see what updates they bring in the future.

Hyper Dash is available now for Oculus Quest – check it out.