A few VR games have now fallen into the camp of being a music rhythm game with a sweet workout in disguise. Returning to our VR Corner feature segment, I jumped into Synth Riders, one that fits this very niche. While not going as far as to dethrone the genre greats, it provides some symphonic harmony and is a blast to play when you’re on top of your game.

Synth Riders is another VR game that situates the player on a virtual highway, the first of this type I’ve gotten the chance to play in our VR Corner feature. Flying towards you are orbs resembling notes. Backing you is a varied soundtrack full of synth music, a little rock and metal, and often an intriguing blend of the two. In the stronger songs that blend several genres, they’re filled with dubstep-style drops to introduce each section. These moments are thrilling to play, hitting notes to the beat as it builds up, only to burst into either a faster or slowed-down rhythm, requiring the player to pick up the pace or slowly ride it out on some long notes that you’ll glide your hand across, simulating rails.

While not quite seeing the same love or collaboration as monolith Beat Saber does, there’s still plenty of tracks to choose from. Free of additional charge come 52 songs at the moment, varying from synthwave classics to ones built for the game. Jump into the paid content and players can see their soundtrack round up to 67 songs total, with singles from well-established artists such as Muse. While this genre of music is by no means for me, it’s undeniable how satisfying it is to explore them in the context of a rhythm game. Top this off with the ability to add challenge modifiers to these songs, add your own custom tracks and play the frantic fun that is multiplayer, and you’ve got a whole world of rhythm game replayability ahead of you.

Despite being grounded in very similar ideals, Synth Riders does well in establishing itself against similar rhythm games such as the aforementioned Beat Saber or even Pistol Whip. While absolutely having its own challenges in the different means of play and ramping difficulty, I’ve also found it can be a more forgiving rhythm game in other regards. Where Beat Saber will ask for more pinpoint accuracy in the form of slicing notes in certain directions, Riders just… doesn’t. The musical notes in the form of orbs that fly towards you don’t ask too much of you to register hitting them, just holding the relevant controller in the general direction.

This forgiveness allows for two things depending on the type of player you are. Players can take their time a little more, feeling the music and skating by just doing what is asked of them. Alternatively, you can do what I did and make your own little workout routine of it. I found great joy in alternating punches to hit the notes, be it jabs, hooks or uppercuts. It helped to loosen up my body a bit and also develop a nasty but healthy sweat by the end of some intensive songs.

“I’m pleased to report that Synth Riders is another VR rhythm game that’s a blast to play and feels oh so good.”

I’m pleased to report that Synth Riders is another VR rhythm game that’s a blast to play and feels oh so good. Be it ducking and dodging through obstacles as I hit notes, to feeling like I’m soaring as I glide my hands across long notes and follow the rails as they twist and turn, it’s fantastic. This even translates to the games multiplayer. Things could have gone absolutely wrong balance-wise, but it doesn’t. It’s altogether a nicely fit package.

The multiplayer situates players into rooms however private they please with a possible player count of up to 10. If you’re vibing some more friendly competition, you can turn on no modifiers and just see who performs and scores the best in these individual songs. It’s fun on its own and offers in-game voice chat to gauge how pleased (or unpleased) your opponents are with how they’re performing. What serves as its own beast and could very well make or break friendships is the ability to turn on powerups. 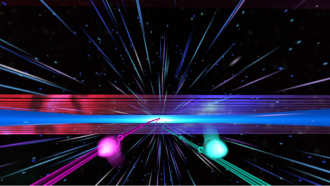 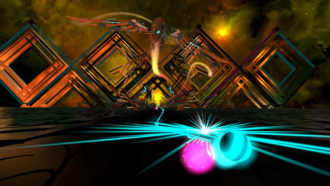 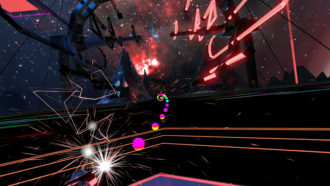 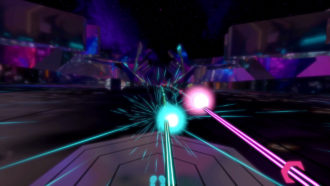 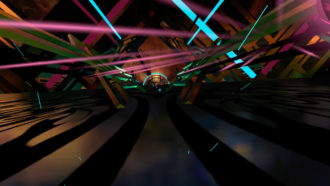 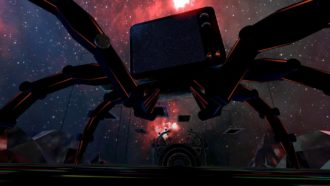 I jumped into some of the multiplayer with fellow writer and Chief Editor Luke and where it got joyously ugly was when we opted to turn on power-ups in our games. These serve as Mario Kart style aids, that can add heat in an already tense game, adding both offensive and defensive options. These powerups are obtained by hitting a special note you’ll witness every so often, only to fire them off later with a press of the trigger button on the Oculus Quest 2 controllers. On the more comical side of things, you can send a powerup that embiggens the notes players will face, so that their view of things coming further down the highway are obscured. On the brutal spectrum, there’s a powerup that sends Space Invaders style alien crafts after you. If you’re unsuccessful in physically dodging the bullets they fire at you, your streak of successful notes is ruined, tampering your max score.

This mode is so fun. The evil, competitive side of me delighted in hearing Luke on the other end curse on me for making his notes smaller and harder to see, messing up his groove. Gameplay can become so frantic when it comes to multiplayer that even a seasoned player will fight to keep up. Miss enough notes however and you’re placed in a Game Over screen, where you’ll still hear the song ongoing and your competitors continuing but you’re only left with the option to sit here or exit. It’s a small nitpick in an otherwise great game but it would’ve been a welcome opportunity to add a means of spectating the other players, seeing how much better your friends are faring.

Synth Riders is also likely the game that oozes the most style out of all of the VR Corner ventures thus far. As notes travel towards you in neon colours, with crisp and abstract cyberscapes populating the background, you’ll feel like a badass in your own vapor/synthwave music video. Colours pop so damn well in this game and it’s a delight to see a burst of hyperlight and colour all around you as you glide against those ever addicting rail notes.

Top it off with a wondrous and varying soundtrack to boot, and there’s plenty to adore and sink time into in Synth Riders. I’m never one for being into the type of music rhythm games offer. Though, in the context of being immersed in this cyber heaven, the music and beats filling your ears, it’s pure bliss.

I was late on the Synth Riders train but I’m glad VR Corner gave me the perfect excuse to jump aboard. With an absolutely stacked base soundtrack, songs for purchase and more teased for the very near future, it’s never been a better time to give it a go.

Synth Riders is available now. Go sink your teeth in.