Siege Survival: Gloria Victis is a new strategy survival from developers Black Eye Games and Fish Tank Studio. It’s a game concept focusing primarily on the internal struggles and hardships that occur during castle sieges that were prominent throughout medieval history. Often lasting for several months or sometimes years, this kind of warfare was usually the main strategy utilised whenever opposing armies would be forced to lay siege in a long and drown out stalemate.

Instead of playing as the heroic defenders or as the invading forces, the game focuses on the human experience that isn’t a soldier fighting a war. You control various villagers that have been caught in the middle of this conflict and have been forced to barricade themselves in the castle fort. There is little food, most of the garrison is dead or fled to save themselves. The overall tone is one of grim hopelessness with only your fellow townspeople being able to lend their support in any way they can. It’s a unique idea for a strategy/base building game to inhabit, with a lot of potential for gamification that can lead to engaging emergent storytelling thanks to the way each survival mechanic plays with each other.

No doubt Siege Survival: Gloria Victus is a tad familiar to those of us who have played games such as This War Of Mine or the excellent city-builder, Frostpunk. Both of these titles focus on the emotional struggles of trying to survive in a hostile that isn’t a zombie outbreak. Instead, focusing on stories of surviving in a war-torn city or trying to survive against the elements. It’s an interesting concept where the antagonist force isn’t directly known or identifiable, but is omnipresent and felt by all.

In this story, your kingdom is under siege from a raiding army and it’s your job to hold out until help arrives. While only starting with a pair of villagers, you will eventually find additional villagers to help withstand the siege until it’s lifted, and having more people to assist in scavenging and building is vital. Lack of resources poses just as great of a threat as the guards patrolling the streets at night do. Speaking of which, the only viable way to gain certain materials and items is to scavenge the war-ravaged city streets under cover of darkness. While this mode can be a bit sluggish and slow, it’s a necessity for adding tension in an otherwise calm, albeit depressive atmosphere, that does mix up the gameplay enough to not make it too boring.

Sadly however, the general base building mechanics that take place within the keep do feel painstakingly slow to feel like any progress is being made. With resources so few and your initial pair of villagers only able to perform a finite number of tasks in any given day, any kind of progress is slow and plodding. The uncertainty of when the next attack to the city might happen is compelling, but there was a lack of momentum that I felt as I was trying to upgrade structures and feel any sort of progress. I never truly felt I crested the proverbial hill of the game’s difficulty, which is quite possibly the overall point. The situation is supposed to be hopeless and overwhelming, and the early game does reflect this, but I’m not sure in the way it was most likely intended. 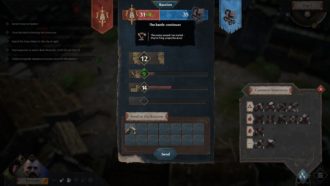 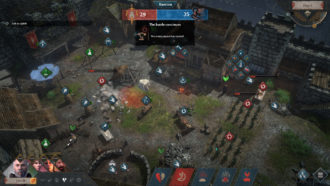 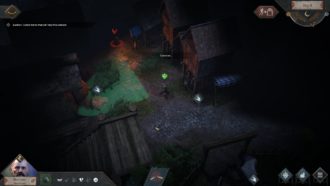 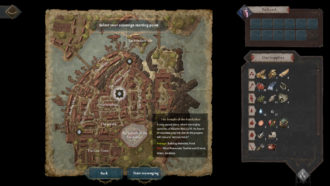 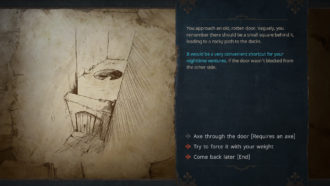 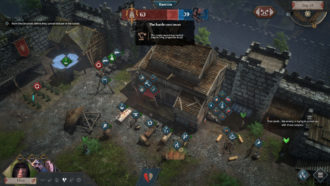 The game’s user interface is somewhat lacking in this current build. While the font choice looks like a placeholder, it is good for readability. However, when paired with the game’s gorgeous pencil drawings during story sections, it does seem a bit out of place. During actual gameplay, various on-screen elements can become cluttered the more structures you build. This can lead to frustrations trying to micro-manage villagers during siege battles, even during the game’s quieter moments like performing tasks can be misclicked due to being in close proximity to the adjoining structure. It doesn’t help either that whenever a resource produces new materials such as water or dried materials, it’s easy to miss alerts when said resource is able to be collected.

Siege Survival Gloria Victus is still in development, so there is hope that a lot of these teething issues can be easily fixed or workarounds included. The overall premise is compelling but I’m unsure if all these disparate elements work well enough together to create a cohesive whole. While there are some interesting narrative choices to be made through the game’s story that can lead to different outcomes, the moment-to-moment gameplay does feel in need of being streamlined. Either way, the attempt being made is interesting enough to grab my attention and I’m eager to try the complete package later this year.

You can wishlist Siege Survival: Gloria Victis on Steam, here.