There Is No Game: Wrong Dimension is made better with two

Out of every Nintendo Indie World Showcase, there’s always a neat little handful of titles on offer. Often, there’s one or two that especially jump out at me. In April’s showcase, that game was none other than There Is No Game: Wrong Dimension. Promising very The Stanley Parable humour and serving an anti-game style premise, I had to get my hands on it. After spending time with it, I can confirm it’s a delight and needs to be on more peoples’ radar.

There Is No Game: Wrong Dimension deconstructs the genres of games past

There Is No Game: Wrong Dimension has a wild premise going for it. Booting up, you’re greeted by a voice at the title screen that informs you that, sorry, there is in fact no game to be seen here. Use a cursor to pick and prod at different elements of the title screen and you’ll soon see things can be uncovered. Gradually, you note a clearly marked button dedicated to kicking things off, booting up the proposed game. The voice, who you’ll soon learn to be the game itself, will begin comically placing obstacles in your path to work through. Meanwhile, they’re trying to coax you out of continuing further, even begging you to shut down the game and play literally anything else.

“Narratively, it’s fun and engaging to see just how far There Is No Game goes.

Cleverly use a coin to unscrew a bolt here, pull a drawstring to peel back a curtain there, and the button will be within your reach. Alas! A personified glitch comes along and sends you spiralling away, travelling through the dimensions of video games that are very wrong and very much not where you need to be. So, your journey begins.

Narratively, it’s fun and engaging to see just how far There Is No Game goes. Viewing a Sherlock Holmes adventure game from the outside in via a mock-up CRT, guiding a hero through a Zelda rip-off, later aiding the game’s creator… the gambit’s covered. Only, all of this is done within the confines of a point-and-click puzzle game, utilising the items and environment around you. The way the worlds and puzzles unravel within is where the entire experience is at its most charming. Backing it all up is the smart writing and hilarious performance of Game, reacting to your situation. 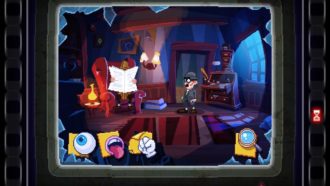 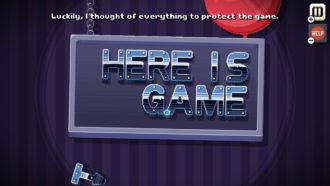 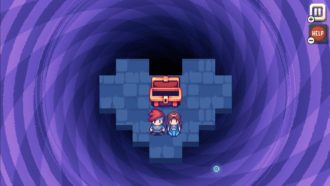 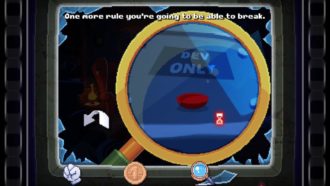 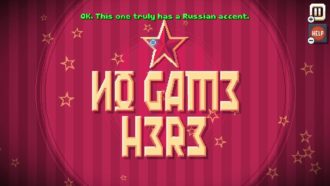 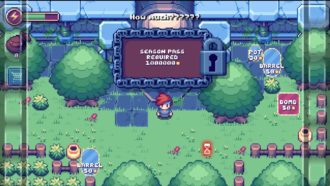 Two heads are better than one

Personally, Wrong Dimension thrived largely when I experienced it with another. This is a game I played about half with and without my partner. Not only was I thrilled to share the humorous adventure with someone else, but it helped in approaching obstacles from different angles. With her being more familiar with point-and-click adventure games, we were able to tackle the Sherlock Holmes themed chapter without as many issues as I would’ve had alone. The puzzle solutions, while at times cleverly obtuse, were undoubtedly part and parcel for her. If all else, it paid to see her delighted by a Monkey Island reference.

Then, when it came to me adventuring through other parts of the game solo, I found myself living a little more out of a guide. This commonly can take the fun out of games of this nature, but that’s just simply not the case here. It’s hard to be frustrated by this because when you finally see these solutions unravel within the game, be it referential or otherwise, they’re so smart and charming.

There Is No Game: Wrong Dimension is such a wonderful and meta-game that thankfully never toes in the overbearing. Inside its few hour-long experience there’s a lot of laughs, nods and smart puzzle solving to be found. Whether the solutions include jumping into a mock OS of a PC or utilising references to hit previous indies such as Papers Please or Minecraft, it’ll delight plenty of seasoned gamers. This is a game bursting with magic and flavour that while not essential, can only be strengthened by sharing with others. With the game fresh on Switch, there really isn’t a better time to jump in than now.