Dungeons & Dragons: Dark Alliance is almost upon us, releasing later this month to most consoles and PC. But despite being a D&D nerd myself, up until now I haven’t been all that excited about it. My idea of a video game based around D&D is a deep RPG with plenty of character customisation, branching narrative paths, and tactical combat, and Dark Alliance is very much… not that. But when Wizards of the Coast along with Koch Media recently gave me an opportunity to try the game out for myself, I was surprised to find that it carried the heart and soul of Dungeons and Dragons just as much as the RPGs I’m so attached to.

Dark Alliance is an action-packed brawler where you and up to three buddies can take on the role of a party of well-established characters from the D&D world: Drizzt the rogue, Cattie-Brie the ranger, Bruenor the fighter, and Wulfgar the barbarian. It’s big, explosive, and fast-paced, with plenty of enemies and monsters to smash your way through.

For many D&D players, I imagine smashing through iconic enemies like frost giants and beholders is what it’s all about anyway. I’m more interested in the role-playing aspect, so I was surprised to find that despite Dark Alliance does not involve any role-playing, I didn’t miss it at all. I was far too busy crushing monsters underneath my boot, you see.

In the demo, we played through just one of the levels offered in the game: Verbeeg Jamboree, a cave swarming with undead dwarves and cannibalistic trolls. The dungeon-crawling gameplay is a real-time version of a classic D&D campaign: you’ve got traps, hidden areas with loot, and a boss at the end.

Each character has a series of light attacks and heavy attacks that freeflow into each other, which on the two characters I tried out felt natural and satisfying. Each character has special abilities with various effects that can be used by expending Stamina, such as massive damage, battlefield control, healing, and more. Some team spirit will clearly be needed to succeed here, especially on some of the harder difficulties. Playing the level on a higher difficulty, the game doesn’t pull its punches. We wiped multiple times, but we persevered until we finally beat the boss of the dungeon and got rewarded with all that sweet, sweet loot.

“Dark Alliance seems like it can balance drama, humour, and horror”

I can tell that Dark Alliance is going to have a flair for the dramatic. At the beginning of the level, the characters share some dialogue that shows that they share a history, and reveals a bit about them as characters.

Later, when we finally killed the boss, his death scene shows him stepping on his own mace, then comically falling backward into a pool of lava, and flipping us off as he disappears beneath the surface in a shot reminiscent of Terminator 2.

It’s exactly the sort of scene that would be described around a D&D table, and I am glad to see that Dark Alliance seems like it can balance drama, humour, and horror. It made me want to see more than the brief hour I got with the game. 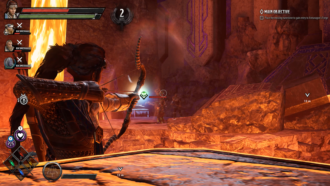 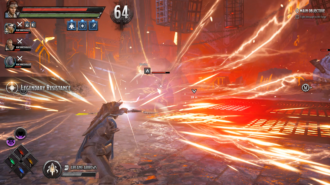 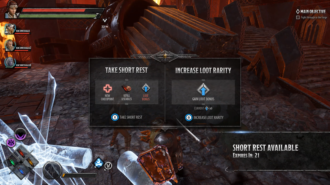 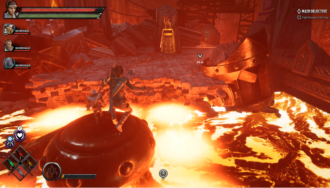 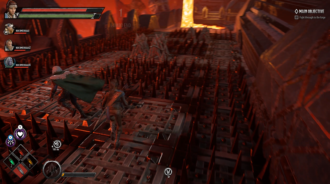 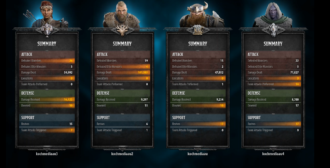 Although there’s no character customisation, that doesn’t mean you can’t have a say in what your chosen character wears. When we came back to our home base, a hub area where you can level up and upgrade your weapons, we could open up our loot to see what we got. The anticipation of waiting to open our loot rewarded us with a nice hit of serotonin, and from what we saw in the demo there looks to be a wide variety of armour and accessories to be collected. This seems as if it’s been set up to reward replaying levels on harder difficulty. Dark Alliances has promised that no microtransactions will appear in the final game, which is always encouraging to hear. I hope they keep their word when it comes to future content too.

Koch Media have also revealed their DLC roadmap for Dark Alliance, and it looks pretty sweet. The first two updates, which will be free, will bring in new levels and difficulty rankings. Their first expansion, “Echoes of the Blood War”, will introduce even more levels and new playable characters, though it has not yet been revealed who these new characters will be. All this DLC will be releasing in 2021, meaning we don’t have long to wait after the game launches on 22nd June 2021. We’re ready!