Psychonauts 2 preview unveils a sequel “not restrained by resources”

Checkpoint Gaming was recently lucky enough to get access to a significant chunk of Psychonauts 2 for preview purposes, going hands-on with the game and experiencing around five hours of content from four different ‘brain levels’. Not only that, but we also jumped into a Q&A with three different members of the Psychonauts 2 development team including Studio Head Tim Schafer, Art Director Lisette Titre-Montgomery, and Senior Systems Designer Lauren Scott.

The game’s development history is an interesting one. This is the first game being released by Double Fine since their acquisition by Microsoft back in 2019. It’s one of the first true sequels Tim Schafer and studio Double Fine have ever made, with Schafer historically favouring new IP rather than sequels. It’s also a sequel in the truest sense of the word, with Psychonauts 2 kicking off mere moments after the end of Rhombus of Ruin, a VR exclusive Psychonauts game released in 2008 that starts at the exact moment the original Psychonauts ended.

Despite rarely making sequels, Psychonauts always felt like the title within Double Fine’s repertoire that was in most demand for a follow-up. The 2005 release was basically the definition of a cult classic, with the title often revered for its interesting world and gameplay mechanics that allowed protagonist Raz to dive into the minds of other characters and use his psychic abilities to traverse an often surrealist but always grounded world. With that said, it’s always a big ask to bring back a franchise that hasn’t had a proper release for over 15 years. How do you return to a classic and bring in modern game design philosophies without ruining the nostalgic magic that made the original so iconic?

“I had ideas for both a prequel and sequel.”

Tim Schafer told us that he “had ideas for both a prequel and a sequel.” Over 15 years is a long time to lock down exactly what you want to do with a new release in an established franchise, but ultimately Schafer landed on a sequel because he wanted to show the headquarters of the Psychonauts. The Psychonauts aren’t just the namesake of the game series, they’re also an in-world spy institution that train promising young psychics. Raz, the franchise’s protagonist, always wanted to be a part of the Psychonauts and see their headquarters, so that’s exactly what Schafer wanted to happen in the sequel.

Going hands-on with the game and I found it easy to feel excited, not just because I was returning to a beloved game series from years back, but because I got to see Raz pursue that dream that was built up throughout the first game. Walking into the Motherlobe within the preview, aka Psychonauts HQ, you get to see a different side of this game. It’s a hub area full of important characters and contains classes where young psychics are mentored.

Psychonauts 2 feels so authentic to the original. I don’t think I immediately realised why that was whilst playing, but during our chat with the developers, it clicked into place. They told us that Psychonauts 2 “has the same heart of the first game”. They told us how lucky they were to get the same voice talent to return for all recurring characters and how this was a big part of the reason the sequel “felt right”. I have to concur with their sentiment. The eager to please and charismatic Raz, voiced by Richard Steven Horvitz, feels warmly familiar. In fact, the whole gameplay experience feels warmly familiar. Brain levels, where Raz infiltrates another character’s mind, are still as abstract and surrealist as ever whilst being able to brilliantly convey information pertaining to the psyche of that character, often leading to empathy and moments of narrative realisation. The development team let us know that “every brain feels like a different ride.” 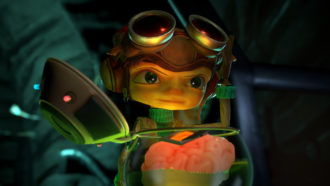 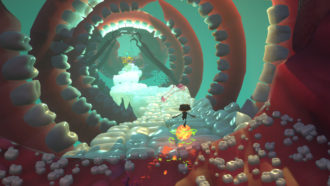 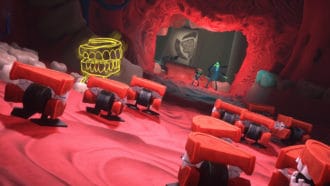 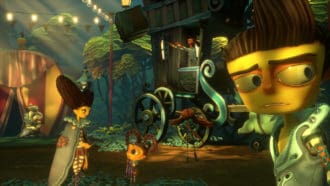 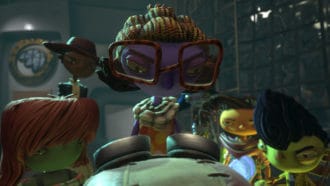 The gameplay mechanics of Psychonauts 2 also beautifully tie into both standard video game tropes and also elements of the mind. Brain levels are detailed environments with depictions important to the character whose mind you occupy. Raz can move around these level with his platforming prowess as he uses his psychic abilities to fight enemies, solve puzzles, and leap over large gaps. Emotional Baggage returns from the original as a form of collectable and enemies known as Censors will hunt down anything that doesn’t belong (yourself included) to try and stamp it out.

Psychonauts 2 so far feels like a natural evolution of the original concept. It’s a smarter and cleaner rendition of the 2005 3D platformer that retains the charm and comedy people will remember. The game won’t disappoint excited fans looking for more Psychonauts goodness, though it will be interesting to see if newcomers to the series will find Psychonauts 2 modern enough, or if they’ll find it a little too stuck in the past to be engaging.

During our developer Q&A, the sequel was described as Psychonauts “not restrained by resources.” It is heartening to hear that sentiment from a mid-sized studio that is undoubtedly finding more financial stability now that they’re a part of Microsoft. Although with that said, players shouldn’t go in expecting a bombastic AAA experience, as the charm of a smaller development project is still very much felt here.

Psychonauts 2 will have you acquiring abilities at a much faster pace than the original. This makes sense as the developers themselves commented on how there are a lot more powers to get through for this follow-up. One of the big ones we’ve already seen showcased is that of Mental Connection, an ability allowing Raz to not only link ideas with narrative implications, but to essentially grapple his way around for added manoeuvrability. I do love seeing the world of gameplay and narrative combine so elegantly, something that may well be one of Psychonauts 2’s biggest accomplishments.

On the subject of mental health, the studio representatives were happy to let us know that they approached Psychonauts 2 with sensitivity in mind. “We tried to do both our own research and research aided by the resources that were given to us by Microsoft. We were testing with clinicians and professionals who could tell us where we got it right and where we could improve things.”

When dealing with subjects of the mind and mental health, it makes sense for the studio to be taking steps to ensure the subject matter isn’t triggering or damaging for anyone who plays their game. The team was quick to remind us that although it does deal with these touchy subject matters, the game itself is still lighthearted and not to be taken too seriously. “It doesn’t present itself as a psychiatric textbook or anything, it’s still a game, but it’s trying to be very respectful of those who play the game.”

For those who want to read more about Psychonauts 2 and its link to mental health, check out a recent interview Checkpoint Gaming conducted privately with Tim Schafer where Schafer describes Psychonauts and its gameplay as “the essence of empathy itself”. 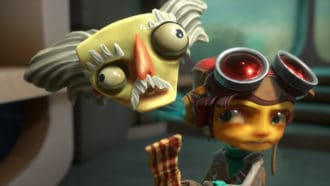 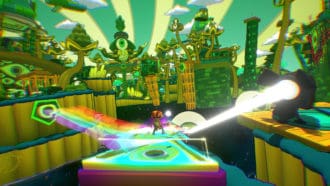 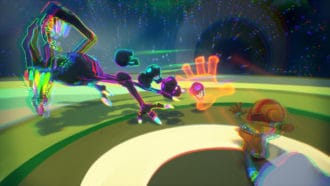 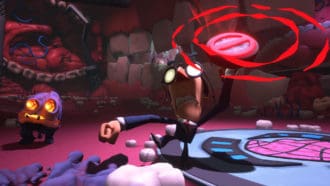 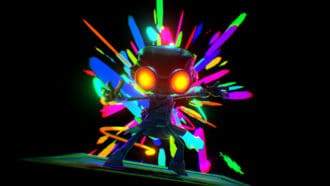 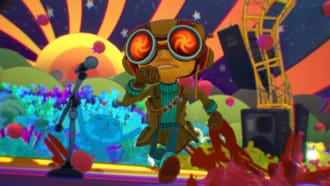 Playing through the demo of Psychonauts 2 and I have to say I found moments that impressed me beyond what I was expecting. One particular sequence early on had the world warping around you as the laws of physics as we know them began to break. It was cool, and Psychonauts as a concept lends itself to these instances of impossible yet engaging scenarios.

The game has also been in the news recently for its accessibility, something the team seems very proud of and something that strangely ended up being somewhat contentious in certain circles. “We want to make our games enjoyable by everybody – playable by everybody… I don’t think it’s as controversial as it appears on Twitter. I think it’s a rather straightforward thing to make your game approachable…”. That accessibility goes beyond just an invincibility toggle, but it also extends to simple things like UI legibility and “tons of other features”. I couldn’t help but notice a big disclaimer at the start of the demo too that warns would-be players of the subject matter that’ll be explored, and I have to assume that same disclaimer will find its way into the game’s full release as well.

“…the perfect game for Game Pass”

Whilst there’s a lot to praise from what we’ve seen so far, it’s still fairly safe to say that Psychonauts 2 is unlikely to be a game for everybody. The game’s quirky nature, uniqueness, and even its wonky art style make it easy to love, but unlikely to reach the same mainstream audience as some of Microsoft’s other first-party releases. But that’s fine. The developers themselves called it “the perfect game for Game Pass”, noting that it might be a risky purchase for your average game store shopper due to how unusual it appears. Hopefully its day one availability helps the game find the audience it deserves.

Ultimately our time with Psychonauts 2 and with the lovely development team just left us excited for more. On a final note, Tim Schafer mentioned that a remake/remaster of the original is not out of the question, but that so much of the source material unfortunately doesn’t exist anymore, making the idea much more work than it otherwise could be. Thank you to Double Fine for taking the time to answer our questions. Psychonauts 2 will be releasing across PC, Xbox One, and Xbox Series X|S on August 25.