Shooting demons on the go with DOOM Eternal: The Ancient Gods – Part One on Switch

Players can dive into The Ancient Gods – Part One whether they’ve beaten the main campaign or not. However, the expansion certainly assumes that you’re already a veteran. After choosing the DLC from the main menu, it starts with a brief exposition dump to bring players up to speed with DOOM Eternal’s ending. After that, you’re dropped onto a base with all the weapons, upgrades and abilities from the main game and set to work ripping and tearing through your foes as usual.

The plot, such as it is, concerns the Doom Slayer’s ongoing mission to rid the world of demons after the end of the main campaign. After a surprising revelation concerning one of the supporting cast, our protagonist is sent on a mission to the Blood Swamps of Hell and beyond to put a permanent end to the demon invasion.

The plot could become a bit inscrutable at times, considering a plot twist later on depends on us understanding the Doom Slayer’s thought processes and motivations, which is a bit much to ask when the character rarely speaks or expresses any emotion aside from barely contained rage. Still, the occasional exposition scenes did not kill the lightning-fast pacing of The Ancient Gods – Part One as much as they sometimes did in the base game; if you’re only here for the demon killing, this expansion has you covered. 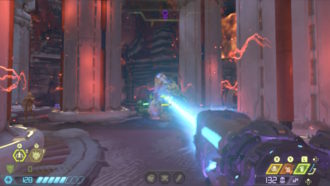 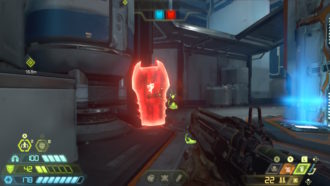 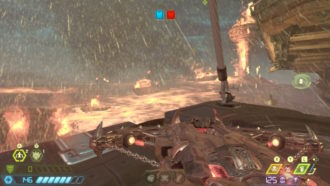 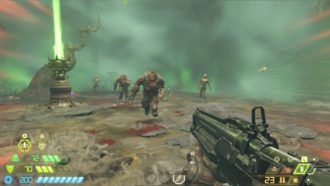 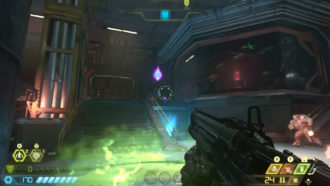 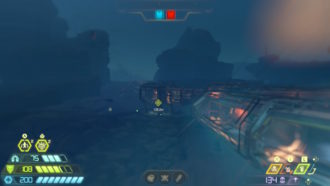 You start the game with your whole arsenal of weapon upgrades. As such, most of the new content comes in the form of new enemies to face. These were a mixed bag, mostly existing to make some of the more underused weapons a time to shine. For instance, the Turrets, whose weak spot disappears if you hold your crosshair on it for too long; while manageable on their own, they become very irritating in large groups because of how difficult it is to damage them in the heat of the moment.

Another new enemy type, the Unmaykr, had a similar gimmick, being protected by an invincible shield, unless you can headshot them while they attack you, making them vulnerable. I appreciate the intention of giving the Ballista and Precision Shot weapon mod some focus. However, having to wait for the new enemies to become vulnerable slowed the game down when every other enemy can be pursued much more aggressively.

The only new inclusion to the demon ranks in DOOM Eternal I actually liked was the Spirit. These demons possess other enemies and buff their attack and defence substantially. They only come out once you kill their host, at which point they are briefly stunned. You can only kill them with Microwave Beam mod for the Plasma Cannon, giving strong Ghostbuster vibes. Having the enemy be vulnerable to literally only one weapon type felt a bit out of place considering the more varied strategies for the other enemies. However, having to make tactical decisions of whether to deal with the Spirit early, or to focus on the rest of the horde to rob it of potential future hosts, gave a nice change of pace.

Aside from the new enemy types and a handful of Prince of Persia-style parkour challenges, The Ancient Gods – Part One falls into the “more of the same” category of DLC. Everything that was great about the main game in DOOM Eternal (as well as some of its bugbears), are maintained. Unfortunately, that means more annoying first-person platforming, where the lack of situational awareness inherent to the first-person perspective makes some of those sections really frustrating. These frustrations came to a head in the expansion’s final boss. Despite its powerful attacks, the arena hazards led to my death much more often than the enemies did.

It does, on the other hand, at least also mean that the cathartic arena shooting, varied enemies and appealing arsenal of weapons are also preserved. The strong qualities of the main game’s port also carry over to the DLC, weirdly blurry cutscenes notwithstanding.

The greater number of demons in some of the combat sequences came close to tanking DOOM Eternal’s otherwise rock-solid frame rate this time around. However, Panic Button is to be commended on their work with bringing DOOM Eternal and its DLC to the Nintendo Switch.

While the Nintendo Switch is probably not the optimal platform to be playing DOOM Eternal, it is amazing that the option is there. Despite the understandable delays to ensure the port is as good as possible, The Ancient Gods – Part One is worth the wait. Although not all the new additions totally work, if you enjoyed DOOM Eternal and wanted more to do, this expansion is definitely worth checking out. The Ancient Gods – Part Two, the second expansion, is set to release on Nintendo Switch later this year.