The Artful Escape preview and devchat showcases an auditory triumph

Just like a particularly insidious earworm, The Artful Escape from Melbourne development studio Beethoven & Dinosaur has been occupying a space within my mind ever since I first got a chance to see it way back at PAX Australia 2016. The game demo available at PAX took me on a surrealist journey through the life of Francis Vendetti as he attempted to find his stage persona. A gorgeous and alien world was the playground for Francis as he went on his metaphysical journey of musical discovery.

5 years later and outside of a drip-feed of admittedly exciting trailers, we hadn’t heard much of the Artful Escape. So you bet I was excited when I was invited to a preview event with game developer Johnny Galvatron where I got to see the game in action and ask the man himself all about it.

The most striking thing about The Artful Escape, outside of its picturesque and otherworldly visuals, is its clear passion for music. Every inch of the experience is tailored around music. The themes, art style, gameplay and more all have a musical cohesion that goes beyond anything I’m yet to see in a game. The world around you comes to life with melody and the player can join the symphony at any moment with the literal press of a button, as Francis busts out his guitar and riffs along.

“…around 5 hours of original music was created for the game, including an entire folk EP”

When I asked, developer Johnny Galvatron admitted to me that the game contains “far too much” music. He estimated around 5 hours of original music was created for the game, including an entire folk EP recorded with multi-talented musician Luke Legs. Impressively, the music the player can generate by jamming on the guitar appeared to flow effortlessly into the background music, with Galvatron and team paying close attention to the composition to allow for this exact type of interaction. It’s this impressive attention to musical detail that has me so jazzed for this release.

The hands-off preview I got to see included moments from the beginning of the game where Francis is met by the fresh face of Violeta. It’s here where I was first greeted by the title’s new voice talent. With indie publisher Annapurna Interactive attached to the project, it wasn’t surprising to see their connections to the film industry being utilised. The game now has a full cast of voice actors including the likes of known entities like Carl Weathers (Rocky, Predator, The Mandalorian), Mark Strong (Sherlock Holmes, Kick-Ass, Kingsman), Jason Schwartzman (Fantastic Mr. Fox, The Grand Budapest Hotel, Fargo) and Lena Headey (The Brothers Grimm, 300, Game of Thrones). Clearly, a lot of love and resources have gone into The Artful Escape since the last time we saw it and I couldn’t be more proud to see this once humble, locally made game flourish.

Also shown off during the preview event was the range of customisation options that become available for your character at about the halfway point of the game. Amongst these cosmetic items are iconic jackets, pants, glasses and more that reference legendary rockstars and musicians. The game really does feel like a love letter to not only music but the passionate people who make it and have helped to push the industry forward. Seeing the breadth and depth of these customization options was heartening. The game really does feel like a celebration of not just the tunes but the entire performative presentation of the medium. It means you can turn yourself into the rockstar of your dreams and live out the fantasy. 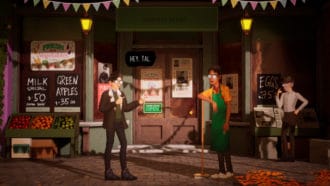 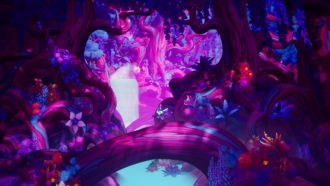 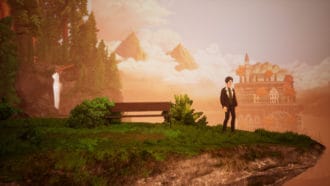 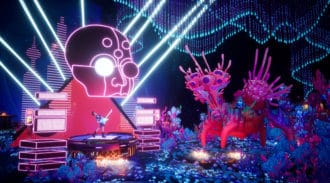 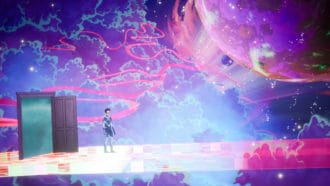 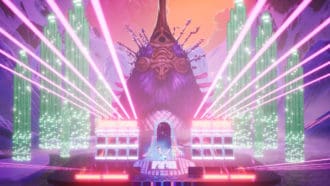 The Artful Escape undeniably presents itself fantastically, but for those more interested in the gameplay side of things, you’ll find a somewhat traditional sidescrolling platformer. With a stronger focus on narrative and world-building, The Artful Escape doesn’t appear at first glance to present players with too much in the way of challenge. Galvatron confirmed the presence of boss battles and the ability to fail a platforming segment, although he noted that the fail state wasn’t punishing. Within the preview I never saw any combat, hazards or foes, nor did I actually get to see a boss battle.

What we did get to see was some dialogue options and candid conversations reminiscent of 2016’s Oxenfree. Galvatron went on to explain that these dialogue choices would help shape your character and their stage persona, but that it wasn’t intended to contain a branching narrative. For those more interested in world and narrative than challenge, The Artful Escape definitely seems like it’ll bring the goods.

If you want to find out more about this visual/auditory spectacle, you can head to The Artful Escape website. The game will be releasing September 9th across PC and Xbox. Thank you to Johhny Galvatron for taking the time to share the game with us!