Most of the excitement that has come out of VR over the past few years is the way once-in-a-blue-moon titles have pushed the platform’s envelope further. We saw it last year with Valve’s momentous Half-Life: Alyx. Maybe you even got your toes wet in the sandbox that is BONEWORKS. In a somewhat similar vein, A Township Tale is another VR entry that’s aiming to make a splash. However, it’s not doing so in a bombastic AAA fashion, nor is it a virtual playground. Instead, it’s jumping wholely into the sim genre, encouraging players to go out and venture, re-establishing a town from the ground up.

Getting to play the game on Oculus Quest 2, there’s absolutely potential for the game’s community to grow. Its charm is absolutely undeniable and serves to be exciting in concept, even if I walked away from the experience feeling that it’s not for me.

A Township Tale is absolutely an enticing premise for those that live and breathe VR as their main gaming platform of choice. Players get to craft a typical fantasy RPG protagonist of their choosing in a workshop, complete a tutorial and then journey out into the vast world on offer. While being light on a story, your large priority is to slowly rebuild an abandoned town. That’s a tried and true formula but needs to be implemented well in keeping ways to entertain you through those long moments.

Unfortunately, A Township Tale doesn’t have much of that. This is absolutely a game that you can lose hours upon hours of time in, which will undoubtedly be a draw for many players. It just won’t be for everyone nor will it be worth it for those already invested in a time-intensive video game. Add the fact this is a VR experience and that provides more challenge.

“Picture the game as an MMO-lite, featuring a single-player or co-op adventure that runs on player-owned servers. Add a little dash of typical RPG adventuring and popular life sims and you’ve got it. That’s A Township Tale.”

Mining, woodcutting, chiselling and foraging all are already activities you’ll spend plenty of time performing passively. That time can balloon if you want to progress to further areas outside and within your town. When it comes to accessing these areas, you’ll be asked for mountains upon mountains of wood and other materials to craft a bridge, re-establish the town tavern and the likes. It’s full of busywork intended to give you that endorphin rush of progression, not too dissimilar to some of the tasks you’ll find in Stardew Valley.

Picture the game as an MMO-lite, featuring a single-player or co-op adventure that runs on player-owned servers. Add a little dash of typical RPG adventuring and popular life sims and you’ve got it. That’s A Township Tale.

If you’re a gamer that plays almost exclusively in VR and just read that prior paragraph, you’re likely rushing out to play it. So should you. Good on you. However, if you’re like I and much prefer VR as a platform for you to dip your toes in every now and then have a little fun, you’re going to be overwhelmed and maybe even a little disappointed with A Township Tale. It’s once again another video game that doesn’t particularly respect your time or patience. I’ve spent a good sample time with it to get a feel and it seems I’ve hardly made a dent.

Some projects of mine have made little progress. Others have been abandoned entirely. I could jump into the co-operative play, the game’s dedicated Discord does suggest a community somewhat exists. Though you’d be forgiven if you thought there wasn’t one. In my time playing, all the servers I’ve stumbled upon were empty and had as much progress as I. The fact of the matter is that when you don’t have people to experience A Township Tale with, you’re going to be left feeling a little in the rough. 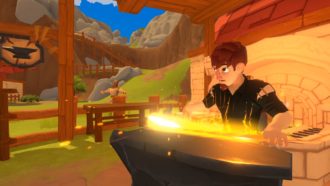 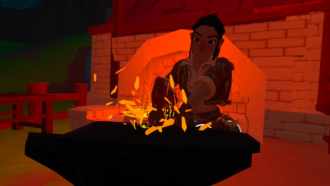 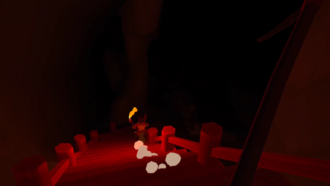 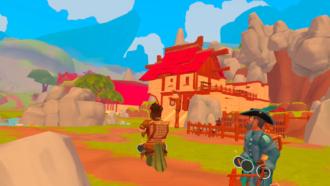 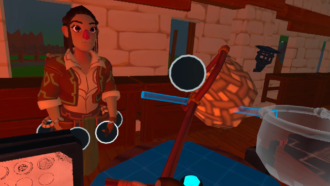 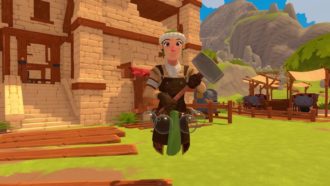 A Township Tale is a game that’s crazy on the simulation scale. Woodcutting, mining, chiselling and just about every activity has to be mimicked to just about as pinpoint precision as possible. While that’s a really exciting concept, that level of immersion promised by that concept never really follows through: the technology in VR just isn’t there yet. I mean this in the lightest and most encouraging way possible, but this lack of forwarding leaps and bounds is evident as ever in a trying and ambitious indie title. Slowly and manually swinging your arms to simulate chopping an axe at a tree, hoping it will connect correctly just isn’t very fun.

Not long ago I covered Sniper Elite VR for VR Corner and gave it nods for its Half-Life: Alyx style of picking up items with the flick of a wrist. I’m always for games that are all about providing comfort and options for the player. Unfortunately, A Township Tale doesn’t have that going for it. Expect a lot of back-breaking bending down and foraging of items in your time in the game. Combine that with the movement options of either teleporting around the big open world at a snail’s pace or travel so fast in the walking mode that it makes me all the more queasy, and it begins feeling like too many factors in-game are working against you.

I absolutely love immersion and realistic activities and movement in games. It’s why I love VR and subsequently helped create the VR Corner feature. What I don’t particularly respect is examples that don’t know how to channel the balance between this hyper-realism and comfort. With discussions and discourse about accessibility and comfort in games remaining near cyclical at this point, I know I’m not alone in that want and need.

A Township Tale sports a cute, cozy and vibrant design that fits the setting like a glove. Rather than be a grimdark setting, it knows when to offer the sweetest and arguably best moments the game has on offer: basking in the sunlight on your trip back from a trying woodcutting or mining session. Like other life simulation games before it, the art style is colourful and vibrant, leaving a feeling akin to being in your own cartoon adventure. With this, the environment setting is promising and magical at times, albeit missing a little heart.

You see, your town in-game is truly abandoned. There isn’t a friendly face in the form of NPCs to be seen at all in the inner areas. Cooperating and interacting with other players undoubtedly makes up for some of this, but it would do well to have added NPCs in the form of either quest givers or people to chat with as you rebuild. Hell, maybe it’d make re-establishing the town all the more worth it if you saw in real-time the people you were assisting.

A Township Tale is far from a bad game. I can only imagine how much work has been put in to get it where it is today. It’s seen much support from the PC VR gaming community. Now that it has made the jump to Oculus Quest 2, it’s a bummer to know it still has some tough roads to travel. that being said, I can see why the community has taken a liking to the game. I even understand its demand, later resulting in it currently being the best-selling Quest game at the moment.

It’s a game I personally on the surface should have absolutely gelled with. I adore getting into the nitty and gritty of VR and damn it, I enjoy a good life-sim. The promise and hypothetical joy of A Township Tale is so close to being fully tangible. It just needs more work to make the sweat you’ll break out and hours you’ll lose all the more worth it.

Still, A Township Tale is so undeniable in its ambition it’s at the very least a VR adventure you’ll want to monitor and see where it’s at later on. For now, you’ll have to be pretty damn patient to see the special parts. It’s just a slow collecting of 200 pieces of wood away.

A Township Tale is available now on Oculus Quest and PC. Grab it if you’re looking for a hell of a VR timesink.