Sniper Elite as a series sure has become an undying niche over the last few years. It hardly has the budget of your typical third-person shooters, nor the marketing. Yet, this series has seen spin-offs in Zombie Army and four mainline entries. It just hits with the fans it’s targeting. So, when not one but four new Sniper Elite experiences were announced back in 2019, I thought ‘of course.’ Fast forward two and a half years and the most recent project in this line-up is Sniper Elite VR. Thus arrives my latest VR Corner feature.

It’s quite a mixed bag between satisfying headshots and some of your typical not-yet-mastered VR gameplay jank. That doesn’t mean there isn’t fun to have. There absolutely is. Let’s jump in, shall we?

Sniper Elite VR, like the series entries before it, is both a bit light and weak in terms of story. Usually, the games aren’t shy about that and almost wear that on their sleeves. Typically, they offer a brief voiced dialogue moment in the loading screen to a level, painting a small scene with it never going further than including ever-so sparse cutscenes. They know you’re here just for the gameplay, and that’s okay.

In this VR foray, however, you’re placed in the shoes of an elderly man, reciting war stories perhaps not too dissimilarly to how your very own grandfather would. It’s not particularly a bad way to introduce levels; you’re sat on a little bench, watching your grandchildren play on the lawn of a farm property. You flip through a book to pick different stories to tell (or more accurately, missions to begin). Fitting, no?

Still, it can’t help but feel a little hokey. Set dressing in these hub moments feels a little hollow, something a lot of VR games still haven’t got right. A lot of the time VR storytelling isn’t quite where it should be. Sniper Elite VR is more glaring at times in this regard than others.

The fact of the matter is that I don’t need as much backstory, motivation or even empathy in these games. Previous entries knew just how much to tell; a simple anecdote or two about being pinned down by enemy forces before letting you in on the Nazi killing fun. Just give me that. That’s all that is needed.

While undoubtedly being comfortable and not once making my stomach churn or eyes sore, Sniper Elite VR is a mixed bag when it comes to the gameplay feeling. When gunplay works in-game, it works well. When it doesn’t, it’s a grapple and fumble rather than a fun challenge to overcome. Where this is most prevalent is in its sniper rifle handling. Returning once more is the ability for some grisly kills. Players can once more make the character hold their breath while aiming down sights, bringing up a smaller more precise reticle to aim with. Manipulate this in your favour and, as a series staple, you’re presented with satisfying and grisly x-ray killcams, witnessing the bullet pierce lungs, shatter skulls, break spines and the likes. It’s as stylish as ever.

“…you’ll be having some strife pulling off sniping feats. Often it can be a bit unwieldy.”

However, you’ll be having some strife pulling off sniping feats. Often it can be a bit unwieldy. You see, to control a rifle with as steady aim as possible, you have to use your relevant controllers to simulate grasping the gun with two hands. Completing this motion, holding your two hands in a way so that you’re aiming down the line of sights can prove troublesome, especially without a peripheral gun or Wii zapper equivalent.

It’s reflected in the visual output you’re seeing in-game too. You’ll often look down the scope only to have it not quite be positioned the way it should, or even glitch out a little and be a view from within the gun itself. Add the need to quickly manually reload in moments in heated gunfire and it does become a bit of a fumble.

Personally, I found the best way to combat this is to lower the difficulty, turn on auto-reload mode and most importantly: don’t spend too long in a gun’s scope. This allowed me to get in the thick of it during frantic moments of gameplay, popping off quick headshots on the fly. It’s far from how Sniper Elite VR intended me to play, I’m sure, but I’m not above using an “easy mode” and making my own fun. 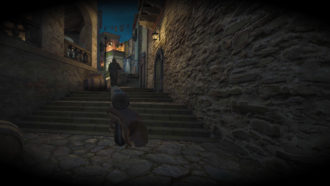 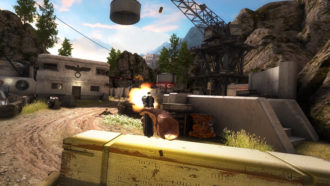 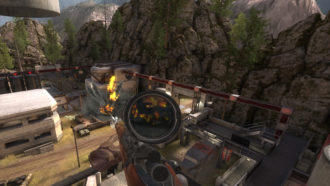 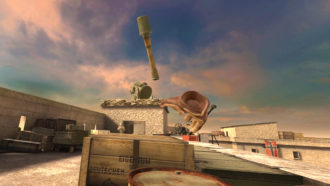 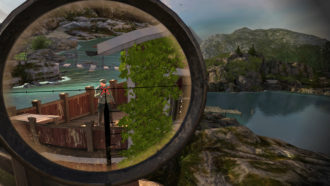 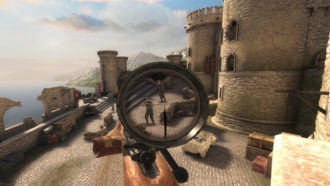 There are more wins and losses against Sniper Elite VR’s name too. Stealth gameplay is still a dull and weaker aspect of the series, serving far more trouble than it’s worth. Players can grab items, be it weapons or ammunitions, with a flick of the wrist motion from a distance, akin to the gravity gloves in 2020’s Half-Life: Alyx. Though don’t expect it to be as polished as its inspiration. The detection of the item is always just a little off and it undoubtedly needs some work in that department. Still, the addition is welcome. I’m well past my limit on bending down and physically grabbing items, moments that so often halt VR games pacing.

Sniper Elite VR is pretty stock-standard visually for VR games. It’s perfectly pleasant environment-wise as long as you don’t look too long at a soldier’s face or think too hard about how contained in an environment you really are. Instead, on offer lies some set pieces that actively do provide some thrilling firefights, even if at times they feel a little disposable.

Whether it’s storming a base or positioning yourself high up in a sniper’s nest, the environment can often be your friend. An early mission in the game situated me in a snipers nest within a villa. Gunfire was coming from just about every angle. All that saved me was a lucky nabbing of an RPG and threading the needle with a tight shot that blew up an explosive barrel. Experiencing this gameplay is absolutely joyous in the moment and is another reminder that developer Rebellion is pretty damn good at crafting an action experience.

It may not contain set pieces as bombastic and memorable as Uncharted or Half-Life, but if you’re looking for some temporary fun in VR, Sniper Elite VR is a pretty solid example in recent times.

Despite being rough around the edges, Sniper Elite VR is full of plenty of fun to have if you’re game to grapple with some classic VR jank. Its gunplay may not be the most satisfying I’ve found compared to my other VR Corner ventures (so far that falls to Lies Beneath), but it does make for an apt excuse to revisit the Sniper Elite series. After all, must a video game always be great? Is it not simply enough to watch a Nazi’s head get blown to smithereens?