Fell foes and till fields in the adorable Kitaria Fables!

Do you ever have one of those days where you aren’t sure if you want to play a game that lets you run around slaying monsters or take it easy befriending some townsfolk and growing crops? Well do I have the game for you: Kitaria Fables!

Brought to us by budding game studio Twin Hearts, Kitaria Fables takes the Action RPG fun of classic titles like The Legend of Zelda and the farming and socialisation of titles like Stardew Valley and asks the age-old question: “Why don’t we have both?”

Top it off with some cute critters and the ability to play as a cat and you’ve got a recipe for a great time! I got a chance to spend a good amount of time with this title recently and I’m happy to say it’s worth and look. Check it out for yourself below.

Now, as cute of a premise as this is, you may wonder how well these genres can work together; after all, when a game tries to mesh two different gameplay styles together, it isn’t guaranteed to end well. Also, when we’re talking about alternating between going out and questing for loot versus making friends and watering potatoes, it’s easy to assume that something’s going to go wrong. Thankfully, I’m happy to say that for the most part, Kitaria Fables has managed to find a pretty solid balance here.

Both the action and the quieter elements have had the right amount of work put into them, so nothing feels like it’s been put to the wayside for the sake of the other half of the game. You’re free to run off and slay to your heart’s content, taking on slimes, orcs, bees, and various other creatures that drop a variety of items for use. Some can be sold for coins, while others act as ingredients or supplies for new items. Conversely, you can spend your days at the farm, tending to a number of crops with assistance from the townsfolk who’ll introduce you to new crops and recipes as you go.

Where the game shines however is in finding that sweet spot between the two genres. A good example is a mission I received about an hour in where a villager requested that I go out and defeat a number of enemies so that she could invent a new food using the ingredients they drop. After doing so, I received a new food item that made it easier to heal in the wild AND also gave me more reason to grow crops, which was a perfect accompaniment to the mission I had received before that required me to grow some flour which unlocked the ability to buy cookies!

The game is really at its strongest when you find that balance between questing and toiling, being sure to have some veggies growing before you head out each day to destroy some local fauna and protect the village. It’s a gameplay yin and yang, where caring for the farm and town will grant you the resources you need to become a stronger adventurer, and being a stronger adventurer means being able to venture further and collect more resources to invest into the farm and help the villagers. It’s a fantastic setup, provided you have the patience for it.

I can’t say the experience isn’t without its flaws though. Instead of having a levelling system via defeating monsters, your stats are tied to your equipment, so gathering the resources to unlock better armour is what will give you more health, and doing the same for your sword or bow ups your damage. This has the odd side-effect of your magic strength being tied to the power of your sword swings.

I can of course understand WHY this was necessary. If it were possible to simply focus all of your attention on level grinding, it would be fairly easy to ignore the farming aspect for the most part, which would mean missing out on half of the intended experience.

You can argue that it’s a disappointing omission that had to be made for these genres to work in tandem, but when you can appreciate the philosophy of the game’s design, it isn’t too much of a loss. This is especially true once your work starts to pay off with collecting resources and you see the significant boosts that come from taking the time to get the next tier of sword and kill enemies in 2 hits instead of 5, or upgrade your watering can from bronze to silver and cut down on your need to water each spot individually.

“It’s a gameplay yin and yang… a fantastic setup…”

The progress is incremental but worth the effort, and it does a good job of feeling like it was worth the time it took to receive as well. Imperfect perhaps, but I still believe it works to the game’s credit. The game hasn’t made cuts to make this all fit together; it’s folded like origami.

A treat to play, but not always to look at

My admiration for the game is diminished somewhat when it comes to the visual presentation. Kitaria Fables is far from ugly, I’m not disparaging it’s looks. Although it does have, to me at least, an issue with having a consistent visual theme.

So what do I mean by an inconsistent visual theme? Basically, as I was introduced to some of the game’s monsters, I couldn’t help but feel like they clashed against the world of the game, or even other enemies. For the most part, everything in-game is very soft in terms of colouring and shading, but then you’ll come across bees that look much more realistic and dark compared to, say, a walking carrot. It isn’t going to break your immersion or anything, but it did strike me as somewhat inconsistent. 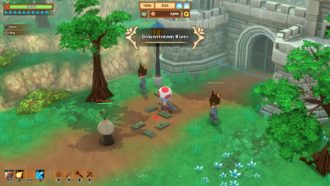 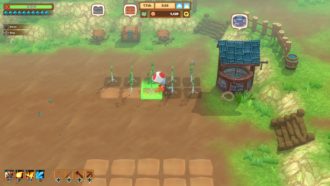 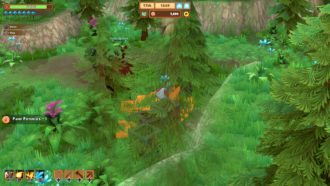 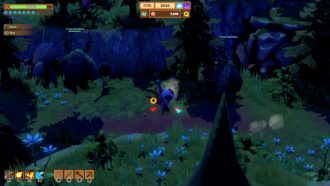 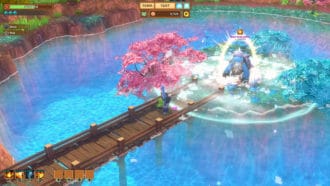 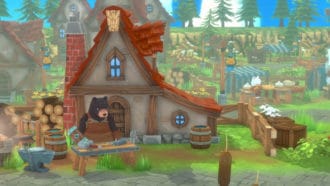 A more pressing issue, and one that I hope gets addressed with a patch, is an issue with the in-game camera. While exploring the world and battling monsters, you may find that your view of the action ends up obscured by foreground objects like trees. The game sometimes will help by turning them translucent so you can still see what’s going on, but it isn’t a very reliable occurrence. I’ve had several fights where I had to dodge into more open areas because the trees and camera simply weren’t co-operating. It does seem that the developers realised that this could be an issue, but the solution for it needs more fine-tuning.

Based on my time so far with the game, Kitaria Fables is very much worth a look for those wanting a new genre-melding experience, especially if you love your Animal Crossings just as much as your Trials of Manas. While it may not blow you away, you should feel right at home with all that’s available to do. With a demo out on Steam, you really have nothing to lose.