Haven Park is park management at its most peaceful

Haven Park is a park exploration game developed by Fabien Weibel and published by Moon Eye Studios. In it, you play as Flint, a small bird in charge of your grandma’s park and the wellbeing of the park’s campers. When you start the game, you’ll find that a lot of things in the park have fallen into disrepair. Talking to your grandmother, it becomes clear that taking care of the park is becoming too much for her. So, it’s up to you to explore your surroundings, repair the park’s camping grounds, walkways, and signposts, and continue your grandmother’s work in order to give campers the experience of a lifetime.

Haven Park’s developer, Fabien Weibel, first became interested in game development after studying animation and creating his own animated TV series called Barababor. After learning more about real-time rendering for VR, he got stuck into learning more about the Unity engine, which eventually led him to want to develop an entire game by himself. He took the plunge during the 2020 lockdown and started working on an early iteration of Haven Park in Unity and Blender. Eventually, a few weeks before Weibel intended to release the game, he was contacted by Mooneye Studios, who went on to publish Haven Park.

When I first booted up Haven Park, I expected a cozy but relatively short game of maybe an hour or so. However, as soon as I got stuck into it, I discovered that the game packs a much bigger punch than it first lets on. While its premise is straightforward — build and repair campsites, resting sites, and recreational facilities — there are also a handful of additional quests to keep things interesting. Aside from talking to campers, you’ll find yourself hunting for treasures, exploring mysterious towers, and even fixing cable cars. All of this is done by exploring the park’s map while collecting crafting materials in the process. There are five kinds of crafting materials and ingredients in Haven Park: mushrooms, wood, fabric, metal, and coins. Depending on what you want to build, you’ll need a decent amount of each to make the park thrive again.

Practically, you’ll spend most of your time wandering around looking for materials and rebuilding campsites, signposts, and resting spots to keep campers happy and entertained. To make sure your campers don’t get bored right away, you can build barbecue stands, ice cream stalls and shops for your campers to spend their precious coins at. Once you’ve built spots with a barbecue stand or a shop, these campsites will start generating coins, which, in turn, can be used to unlock and build more complex buildings. 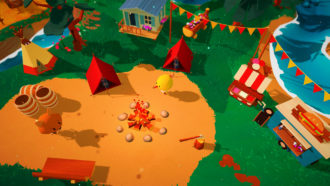 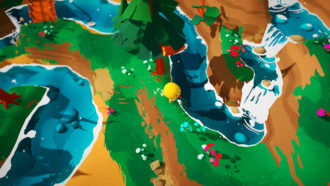 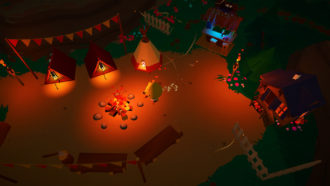 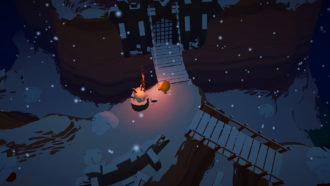 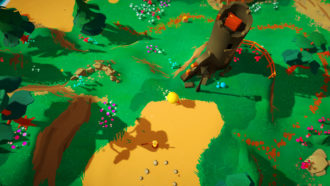 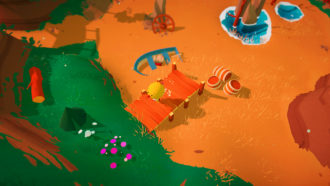 Aside from places where your campers can entertain themselves, they’ll also need spots to sleep. Depending on what materials are available to you, you can build tents, cabins, and even tipis. If you’re unable to build enough spaces in time for campers to sleep, you’ll often find them sleeping on the ground, which, as you can imagine, makes them quite unhappy. While the game doesn’t actively punish you for campers’ unhappiness levels, it does mean that campers will leave a particular campsite more quickly, which will also make it harder to generate coins and unlock more complex buildings for your campsites.

“…the game packs a much bigger punch than it first lets on.”

Rebuilding campsites is important too, because rebuilding and gathering material generates experience points and, once you’ve acquired enough of them, skill points. These skill points can be used to unlock different movement skills, resource bonuses, and more. Even though some of these bonuses don’t alter the core gameplay much individually, and you can technically finish a whole game without them, I found that things did feel a lot smoother once I’d unlocked skill points to walk faster and jump higher, for example.

Initially, I was worried that Haven Park’s gameplay would feel too slow or repetitive, but the game is surprisingly dynamic once you get into things. Haven Park’s gameplay is both relaxing and just complex enough to keep you engaged. Atmosphere-wise, the game feels like a cross between Firewatch, Animal Crossing, and A Short Hike. Considering the whole game is developed by one solo game developer, this is especially impressive.

On the Mooneye Studio website, Weibel has written about his game development journey, as well as his inspirations for Haven Park. Citing influences like Animal Crossing and A Short Hike, Weibel wanted to create a world for players to explore at their own pace, while meeting cute characters along the way. In my eyes, Weibel has succeeded in creating the relaxing wholesome in-game setting that titles like Animal Crossing and A Short Hike are so renowned for. With a nice mix of crafting elements, a gentle soundtrack, cute characters, and beautiful low-poly visuals, it’s easy to while away the hours doing nothing but fixing signposts and benches.

While the overall game didn’t take me long to finish, I often caught myself thinking about Haven Park’s campsites long after I’d completed a playthrough, and even found myself jumping back in the game for half an hour here and there. In my eyes, that’s always a good sign, and for a small game like Haven Park, a very impressive feat too.