Sentient robot vacuum cleaners, copious amounts of bloody murder, stealth and subterfuge gameplay, and a sick 90’s inspired pop banger – Justice Sucks: Recharged has it all. Developed here in Melbourne by the talented team at Samurai Punk (Screencheat, The American Dream, Feather), the game is currently showcasing as part of PAX Aus Online 2021 with a generous demo available for download and play.

Building on past ideas, Justice Sucks: Recharged is a follow-up to 2019’s Roombo: First Blood. The game has you playing as a robot vacuum cleaner who’s tasked with protecting the house from invaders once your family leaves. The storyline is incredibly campy and fun, with Dusty the Vacuum going on various adventures through different locations and fighting off an evil corporation. After playing through the demo, I found myself delightfully surprised by the depth of gameplay mechanics on offer. Justice Sucks is a stealth/action game where you stalk your enemies from underneath sofas and kitchen counters. Your height means you can evade enemy sight and allows you to position yourself for the attack. Sucking up items around you allows you to then spit them out at your foes and do damage. However, the real carnage comes from hacking objects in the environment to set them off as traps and charging up your blood meter to unleashed devastating blows.

Justice Sucks: Recharged is a ludicrous experience but that’s exactly what makes it so charming. There’s a very morbid side to this game that’s often obfuscated by bright 90’s aesthetics and adorable vacuum gameplay. Sucking up blood or the corpses of your enemies helps you charge up special abilities that when activated, cause more blood and body parts to spray over the floor. It’s camp, it’s chaotic, it’s macabre, and it’s weirdly sexy too.

A honk of your robot horn can lure foes in your direction, allowing you to set off traps and slaughter your foes with a well-timed explosion. Dashing around the blood-soaked floor is also part of your toolkit, though a stamina metre will prevent you from abusing this move. Whilst my initial instinct while playing was to be super aggressive and get up in the enemy’s faces, a lack of stamina to get away meant I found myself in a state of vacuum death and so I had to rethink my strategy. That’s when I realised that Justice Sucks is actually a fairly competent stealth game. It’s all about getting into position, using your environment smartly, and being aware of what tools you have at your disposal. 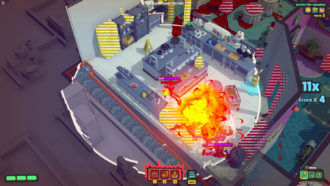 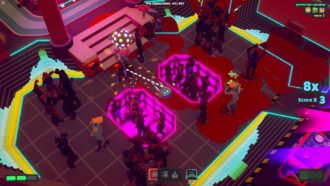 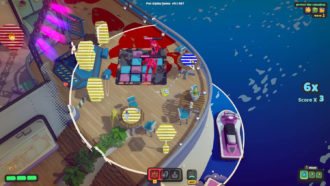 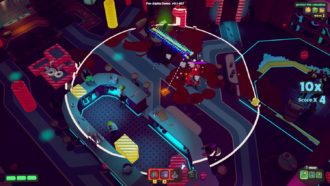 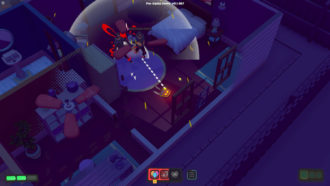 Partnering with Video World’s Monster Mansion, the soundtrack to Justice Sucks: Recharged is an absolute bop with a perfectly fitting 90’s banger being utilised to great effect. In fact, the overall aesthetic design including audio and visuals is just really engaging. I don’t know if I’ll be playing Justice Sucks to chase high scores, though that style of gameplay is definitely included for those who want to see themselves at the top of a leaderboard.

The very best part of causing mayhem and mess in the heat of a battle is the fact that you have the tools to clean up after the fact. Justice Sucks: Recharged rewards you for cleaning up after yourself, a lesson mums all around the world are happy to see represented. It’s a great moment of wind-down after a high-tense murder battle and creates a lovely sense of balance. I for one would be happy to play nothing but the cleaning game, but I guess every ying needs its yang.

Justice Sucks: Recharged is set to release early next year to PC and console. For those looking for more information you can check out the official website or find the game on Steam.