Don’t roll past The Eternal Cylinder

ACE Team, of Rock of Ages and Zeno Clash fame, have come out with their newest title, The Eternal Cylinder, which like their previous games is very difficult to pigeonhole into a specific genre or describe succinctly. The Eternal Cylinder is an open-world survival game, featuring puzzle and platformer elements. You play as a tribe of adorable elephantine aliens called Trebhums, struggling to survive on a planet that is slowly being razed by a gigantic cylinder. Despite this weird premise, it is one of the most fascinating and oddly compelling gaming experiences I have had in a long time.

The Eternal Cylinder starts you out as a single Trebhum, emerging into a terrifying new world as the titular Eternal Cylinder squashes everything behind you. The first thing you learn is that Trebhums are able to absorb abilities from creatures and objects they consume. Depending on what your Trebhum eats, this might result in webbed feet for faster swim speed, longer legs for higher jump height, or furry skin for cold resistance. Eventually, you gain the ability to store mutations, making formerly temporary upgrades permanent.

The second thing you learn is that while the Cylinder may be eternal, it is not constant. Rolling into one of the flashing towers around the landscape will set up a temporary barrier that freezes the Cylinder in its tracks, until you are ready to progress to the next area. It creates this fascinating stop-start flow, where you alternate between rolling for your life to the next safe zone to avoid being crushed and roaming around languidly, solving puzzles, finding more Trebhums, and learning more about the world around you. Because the Eternal Cylinder always dominates your view whenever you look back, it always feels imposing and threatening, even when it isn’t going to move an inch until you’re ready to move on. 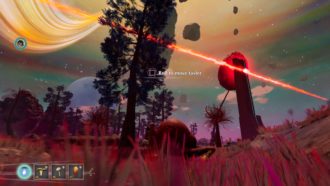 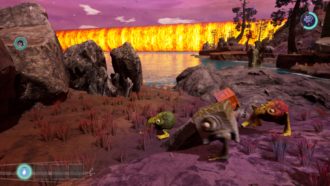 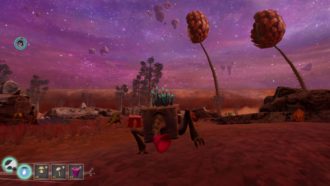 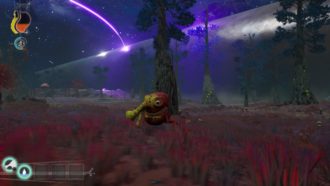 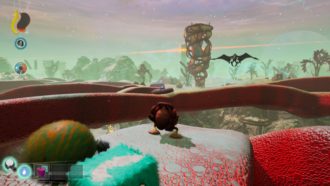 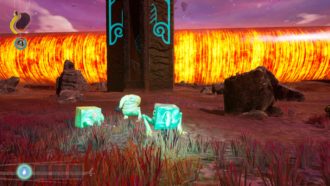 While you control a tribe of Trebhums that will fluctuate in size throughout the game, the bulk of the plot is delivered through a calming narration. The narrator’s calm David Attenborough-esque descriptions of the unfolding events gave the game a strange “playable wildlife documentary” vibe that ended up becoming quite engaging.

The world of The Eternal Cylinder is strikingly beautiful to behold. The twilight sky is dotted with gorgeous auroras and alien worlds that are fantastic to stare at when I’m not running for my life from a malevolent Cylinder.

The wildlife is also stunningly, creatively, and often bizarrely designed – from the Onmogroms with their giant mouths to the jellyfish-like Foosh; few games have produced worlds as intriguingly alien as The Eternal Cylinder. This is emphasised with the contrast between the natural fauna and the Servants of the Cylinder, whose uncanny valley-esque humanlike proportions make them seem even more unnerving as a result.

There are survival elements that you need to pay attention to, although The Eternal Cylinder makes an effort to downplay some of the more frustrating aspects. For instance, although you need to regularly eat and drink to keep your Trebhum alive, the game is remarkably forgiving about letting you move around on empty while you seek sustenance. You also don’t need to micromanage your follower Trebhums; they will share any crucial mutations you obtain and teleport offscreen to catch up to you if you lose track of them.

Overall, the mechanics strike the right balance of adding tension to ensure the player is remembering to feed and protect their Trebhums, without feeling like they are nagging the player away from the more engaging parts of the game.