Weird West is an upcoming action roleplaying game developed by WolfEye Studios and published by Devolver Digital. The game was first announced at the Devolverland Expo on Steam in 2020 and its development team features Raphael Colantonio at the helm. Known as the founder of Arkane Studios, Colantonio is well known for his work on titles like Dishonored, Arx Fatalis, Prey, and more.

We received a preview in the upcoming title back in July and were already pretty excited to see what Weird West was all about. Through the current hands-on preview build, we were able to try out the first act of the game ourselves. In the first act of Weird West, you’re playing as Jane Bell, a retired bounty hunter who hasn’t touched a gun in years. At the very start of the game, however, your son is murdered by mysterious gang members and your husband is kidnapped. Determined to find him, you dig up your old bounty weapons and set off, getting help from a small town’s sheriff along the way. It doesn’t take long until you find yourself on the trail of a much bigger mystery. You’ll be facing off against gang members, monsters, outlaws, and more.

I loved that Weird West wastes no time catapulting players straight into the story. The structure of the game’s main plotline is also one of the most interesting things about the game; essentially, Weird West’s main storyline is split up into different chapters. Each chapter is told from a different perspective, meaning that you’ll be playing as a different character each time. Characters — which are known as ‘heroes’ in Weird West — all come with their own perks, abilities, and backstory, and after finishing a chapter, you’ll even be able to recruit some characters you’ve previously played as to join you as a follower.

“I loved that Weird West wastes no time catapulting players straight into the story.”

Perks and abilities also play into this structure. In Weird West, you’ve got two different kinds of skill trees to work with: one for weapon and class abilities, and one for perks. Weapons and class abilities are upgraded using Nimph relics — claws from mysterious slain creatures that have mystical powers — while perks can be upgraded with golden ace of spades cards found in the Weird West world. I found that weapons and class abilities were all tied to the character of Jane that I was playing as during the chapter, but some of the perks I unlocked rolled over to the main character in the next chapter. I found this a really interesting idea. Not only does it help to get players invested in the current loadout of the character they’re playing as, but it also makes them think about the strategic impacts of perks for later stages in the game.

Having a solid posse is important in Weird West too, because you’ll often find yourself sneaking and battling through hair-raising scenarios. When it comes to its core gameplay mechanics, Weird West combines RPG elements, stealth, and thrilling combat. Drawing inspiration from Belgian and French comic books, as well as Lovecraftian horror stories, the world depicted in Weird West is colourful, creepy, and alluring. The game’s visuals come with intense and highly contrasting colours, and its top-down perspective and stealth mechanics make the overall experience feel like a cross between Grim Dawn and Desperados III. Similar to titles like Desperados III or Partisans 1941, you’ll be relying a lot on stealth when exploring enemy bases and camps. Often it feels like locations are set up as puzzles where — if you utilise the sneak mechanic correctly — you can quietly pick off your enemies one by one. Needless to say, if you’re into sneaky gameplay, this is incredibly satisfying. 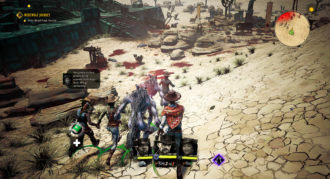 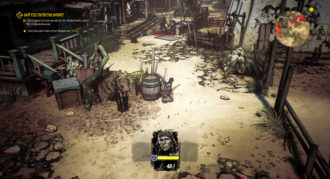 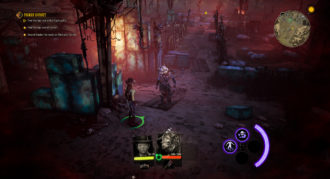 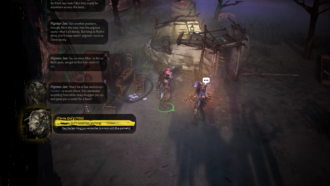 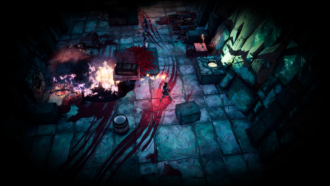 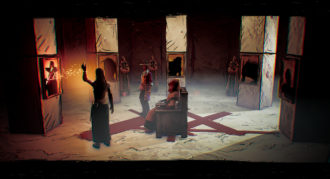 That said, if you’re more of a combat-oriented player, there’s plenty on offer in Weird West as well. For starters, each location comes with a number of weaponised barrels that can turn the tide of a battle in seconds. Poison barrels, for example, do damage to enemies over time, while explosive barrels do damage in one big hit. You’ll often find barrels placed in key spots like on top of a roof or in the back of carriage, allowing you to start the battle with a bang. You’ll also be able to use weapons including revolvers, shotguns, and machetes. Enemies will also come with different kinds of weapons and strengths, and some are marked as ‘greater foes’, meaning they’ll pose a greater challenge than other enemies in the Weird West world. Marked by insignias or crowns, these enemies are either particularly strong or function as local gang leaders. Defeating them will often yield special weapons, and maybe even a reward if you’re lucky.

Dynamite also plays a key role in battle: if you’re suddenly discovered while trying to sneak past a big group of enemies, for example, dynamite allows you to blast yourself out of a sticky situation. Or, if you’re just keen to take on a lot of enemies at once, dynamite can literally be a lifesaver. In addition to its use in battle, dynamite is also helpful when exploring different locations. Weird West features several different doors, but unless they’re marked as indestructible, they can almost always be blown off with the help of dynamite. I found that the dynamite mechanic greatly contributed to the roleplaying parts of Weird West: when using dynamite, I often found myself thinking about what kind of person my character would be. Were they a blow-the-door-off-and-make-an-entrance kind of person? Or were they more of the sneaky variety? Just thinking about these kinds of questions made exploring Weird West’s universe that bit more enjoyable.

Exploring is also one of Weird West’s key features. Unlike other RPGs where you’ll be exploring the game’s world map in a linear fashion, Weird West has you traversing the map through different events and encounters. While you’re travelling from one town to another to gather information on your husband’s whereabouts, for example, you might suddenly get an alert informing you that you’ve come across some caravan traders or an abandoned mine. After receiving a prompt like this, you can choose to veer off your original path and go exploring or ignore the encounter and continue on your journey.

In addition to this, you can also accept bounties to track down hardened criminals in specified locations, or, if you’re lucky, an NPC may inform you about a spot in the desert where someone has hidden a secret stash. These kinds of encounters are procedurally generated and have been described by the developers as ‘vignettes’, designed to be explored by the players. In my eyes, these vignettes lend the world of Weird West greater depth, not to mention ensuring that every Weird West playthrough is different from the last.

While it took me a few hours to complete the first act’s main mission, I also spent a significant amount exploring the desert and the different camps that I found along the way. The game also rewards players who are keen to see more of the Weird West universe, as evidenced when I occasionally found golden ace of spades cards in secondary locations. Similarly, if you’re exploring a town or an enemy base, you’ll find that every object in Weird West can be picked up, thrown, or interacted with in some way. You can even enter buildings that look like they’re only there for decoration, and go rummaging in crates, cupboards, and boxes.

All in all, I found that Weird West looked enormously promising. While there were a few minor bugs and glitches in the current build, it feels like it’s well on its way to becoming a polished and immersive title for RPG fans with a penchant for the Lovecraftian. Its world map mechanics and layered storytelling complement each other, and the way the environment prompts players to veer off their set path is incredibly enjoyable, too. Its core mechanics add to an already mysterious and appealing world that’s a delight to explore for RPG fans. If that’s your thing, Weird West is worth pre-ordering today.

While Weird West was originally said to be releasing in late 2021, the game is now slated to be released on the 11th of January 2022 on PC, PlayStation, and  Xbox.