I’ll be honest, as a longtime fan of the franchise Yakuza, their most recent foray in the world, Lost Judgment, was a bit of a personal disappointment. While certainly holding the meat and potatoes of a game in the series – a vast concrete jungle to get yourself lost in – the story and its themes weren’t all that consistent. Then comes along The Kaito Files, Lost Judgment’s story expansion starring lovable side-character brute Kaito. With it comes a solid self-contained Yakuza story that follows plenty of sweeping ideas, never outstaying its brief adventure.

The Kaito Files starts with Masaharu Kaito kicking it back at the Yagami Detective Agency office. With his lead co-worker off on their own case, our hero is left twiddling his thumbs. Then, a hell of a case falls into his lap. A distraught husband arrives, detailing his spouse’s suicide that happened some two years ago. Where it gets interesting is that there have been sightings of this very deceased individual around the town of Kamurocho, where you reside. Where things get even more interesting is that this woman happened to be Kaito’s flame from fifteen years ago. The hunt begins.

Lost Judgment’s The Kaito Files spans four chapters and runs about seven hours long. Throughout this period, we get a deep insight into the protagonist, someone that previously stayed predominantly on the sidelines. Expect bittersweet flashbacks between Kaito and Mikiko, the elusive figure you’re searching for. Here, we see bittersweet moments where he wrestles with trying to maintain a domestic relationship with his partner and wanting to climb the ranks of the Yakuza family he’s found himself in. These flashbacks, leading to their relationship breakdown all those years ago, do well in accompanying the emotions and stakes Kaito is experiencing in the current day search.

That baggage weighs heavy on him, but he doesn’t bare that alone throughout the DLC. Quickly joining him is Mikiko’s late teenage son Yun, led astray and neglected by their father. Not only does this offer more stakes for Kaito and the player, wanting to return Yun’s mother home safe, but it also provides for nice bonding moments. Throughout the hunt, dodging shady businessmen, Yakuza, and drunks along the concrete streets of Kamurocho, we get to see more of Kaito’s tender side, becoming somewhat of a father figure to Yun. This is all the more heartbreaking and bittersweet when interspersed with these aforementioned flashbacks. Our washed-up ex-Yakuza turned forty-something detective can’t help but look at Yun and ponder: ‘What if my life panned out differently?’ 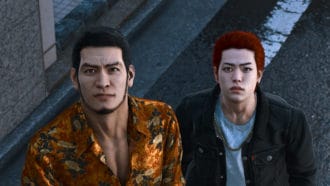 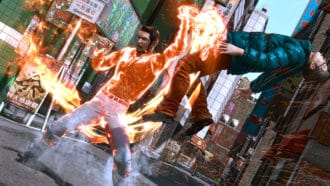 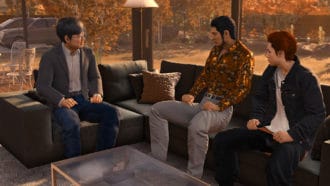 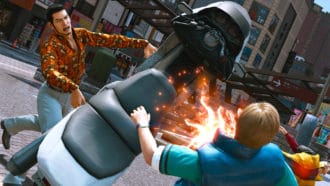 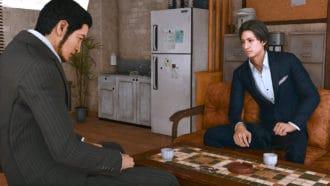 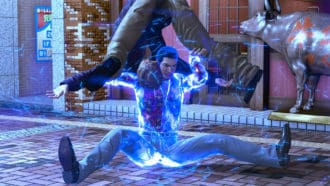 Where Yakuza games are usually bursting with things to do, be it minigames to engage with, eateries to visit, or side quests to complete, The Kaito Files offers a little less. That’s not a bad thing either. Kaito can still visit the local batting centre or tucker down for a meal, though side quests are not to be found. That just hones in further on the fact that this is a story more focused and scoped inwards. If you’re after a story in the world of Yakuza that is solid while not remaining time-consuming, you’re in luck here. The Kaito Files actually require players to own Lost Judgment to play this DLC, and I sort of wish it didn’t. On offer here is a really great story with modest stakes and lesser baggage that I could see being somewhat of an onboarding experience for newcomers.

“If you’re after a story in the world of Yakuza that is solid while not remaining time-consuming, you’re in luck here.”

Thankfully, The Kaito Files continues the recent series’ trend of bettering combat. Two fighting styles are on offer. Bruiser, labelled as our hero’s bread and butter, is the more offensive form. Fast punches and kicks are the name of the game here, pinballing to and from enemies that, if utilised well, won’t leave many an opening for your foes. The Tank-style predictably lets Kaito take more hits and be a wrecking ball. Joyous results ensue. Picking up and swinging weapons and objects can remain part of your combo, no longer having to pause your flurry of heavy and light attacks to push a further third button to obtain such an item. Perform an attack near an environment object that Kaito can lift? He’ll automatically pick it up and start swinging away with it. Even some of the objects previously deemed by previous protagonists as too heavy to use as a weapon can be utilised here. Yes, you can pick up and hurl those bulky scooter mopeds you’ll see around Kamurocho.

While there are less activities to do outside of the linear narrative and getting into fistfights, there is a bit of investigating to do in and out of missions. The more involved instances are in the campaign, seeing Kaito using their ‘feral’ levels of sight, smelling and hearing to investigate crime scenes or other points of interest. Outside in the world, you’ll stumble upon other oddities such as cats in curious places or weird smells in alleys, netting you crest pins of Yakuza families or other valuables.

This is just the right level of distractions to offer in The Kaito Files, without bloating out its length. Wandering down streets and small pockets of Kamurocho, it’s delightfully silly to every so often hear a cat meow or Kaito do a loud sniff, indicating there’s something worth hunting nearby.

The Kaito Files, while modest in length, offers some of the best and most gripping character moments that stand out among a long-standing series devoted to character piece stories. Kaito is a lovable brute of a protagonist, harkening back to the early Kazuma Kiryu days. The Judgment spin-off series of Yakuza is a bit up in the air at the moment, namely because of concerns with the actor likeness of the original protagonist, Yagami. If this off-shoot series of adventures were to continue with Kaito from here on in, I’d be more than okay with it. Here, we have a charming and strong character, more than capable of holding his own.

The Kaito Files is a DLC for Lost Judgment. It requires you own the base game for Lost Judgment to play this expansion. Both are available now on current and past gen PlayStation and Xbox consoles. Check them out.