Turbo Overkill, an action-packed, ammo-spending, bloody FPS released in early access earlier this week. I’ve spent a lot of time with the genre known as boomer shooters, each bringing their own spin on classics such as DOOM or Quake. This recent release, developed by Trigger Happy Interactive and published by Apogee Entertainment, is already another promising and successful venture to the party. Turbo Overkill knows the two most important factors in making a successful shooter: solid gameplay and a silky smooth sliding button. The game nails it on both, quickly erupting in delightful and bloody glory.

The chaotic and explosive adventure takes place in a cyberpunk, neon-drenched city known as Paradise. But this futuristic world is far from what its name would suggest. Home to many a monstrosity that are mutant hybrids between human and technology, Paradise is ruled by a disastrous A.I. known as Syn. You are a stoic hero, known as Johnny Turbo, wielding an expansive arsenal of guns and cybernetic augmentations to your body as you venture on a hunt for revenge. This is as much of a plot that Turbo Overkill will give you thus far. Frankly, it’s all it needs. The vibes, setting, and the action on offer are outstanding, especially considering the fact that only a third of the game is currently playable.

As expected from games like Doom Eternal, Turbo Overkill is a game entirely dedicated to delivering riotous and hectic gunplay and movement, resulting in oceans upon oceans of blood being spilt. It succeeds in this in many ways, but especially by following the golden rule in first-person shooters: make your sliding movement kickass. And kick ass it does, especially considering you have a chainsaw for a leg. Hold control on the keyboard and your cigar smoking protag will slide on their legs, ripping through enemies and exploding in blood and guts. Get all your foes bunched or lined up and you’ll see them all come tumbling down. I dare even the naysayers of boomer-shooters to give that movement a whirl and try to not be impressed. The joy this action brings feels carnal and silky smooth.

There are many strengths to Turbo Overkill’s movement and combat skillsets. Players can purchase upgrades for their weapons or the aforementioned augments one can tie to Johnny’s body. These upgrades take on the effect of being an alternate firing mode for each of the vast amount of weapons in-game. Suddenly your sawed-off shotgun can fire sticky grenades. You’re damn right that minigun can now be a flamethrower. Have fun. On the augment side, more minor boosts can be introduced such as attaching a part to your chainsaw leg that allows for salvaging of health and armour when you successfully mow down a foe with your slide. Mixing and matching is available here and quite needed, whether that’s a perk that reduces the cooldown of your dash or one that adds damage to your slide.

“Turbo Overkill is a game entirely dedicated to delivering riotous and hectic gunplay and movement.”

Deeper instances of your augments will be delivered to you through natural progression and are quintessential. This includes the ability to fire off a series of homing missiles from your robotic wrist or, excitingly, the ability to wall-run off certain surfaces. Before long, you’re taking advantage of each and every offering the game has. Never will you linger on using a weapon for too long or a movement style too frequently. You’ll want to dodge, duck, run, and weave your way through levels, always thinking on the fly. It’s needed to make your way through the solid blend of action setpieces set high in the sky, tight-knit corridors, or arenas flooding with enemies.

Paradise is a visually striking, intriguing, and involved world. Especially when you consider the scope of the game and its development. Turbo Overkill is a New Zealand developed shooter, and, barring some other talent for the likes of music and voice acting, is mostly a solo effort. Studio founder and lead developer Sam Prebble’s prior credits include a popular Doom II mod known as Total Chaos.  That passion and history truly show in Turbo Overkill. Save for one somewhat clunky level that sees players controlling a spacecraft, each level feels really well thought out. A delicate touch of transitioning a tight hallway to a sprawling big open room with a hell of a fight to wade through goes a long way. The further you progress in-game, the more verticality comes into play, too. In the very late levels of the Early Access build, it all coalesces into tense platforming, hopping between ladders, moving platforms, and narrow spots, all whilst popping off crucial shots at foes.

Populating these levels is rich neon lighting, made all the more captivating by its somewhat pixelated, low-fidelity art style. That being said, the detail is absolutely still there. Look outside the map to the greater parts of Paradise, and you’ll see many a flying vehicle or skyscrapers draped in advertisements. Creep into some of the darker depths of interiors and you’ll see just as wondrous imagery. Long tendrils and tentacles will snake along walls and ceilings, made entirely out of dozens of cords and retro CRT-style TVs. Similarly, your enemies are gross and weird. Some are humanoid with boxy retro TV heads and blades for arms. Others are squirming worms writhing with electricity. The enemy’s design of being a disastrous combination of humans and technology is far from new grounds in the cyberpunk genre, but under the visual lens of its imperfect crunchiness, it begs dozens of questions about the nature of the world. 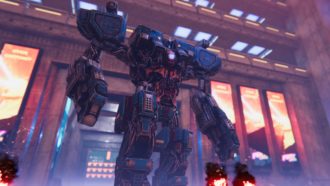 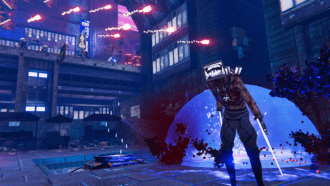 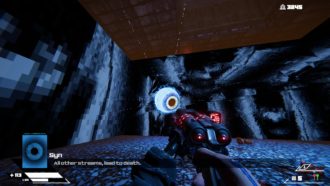 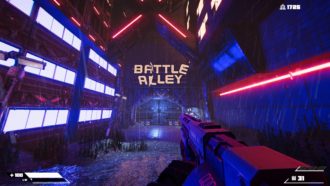 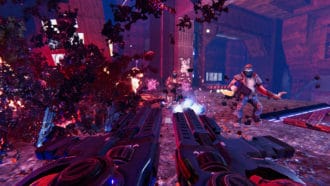 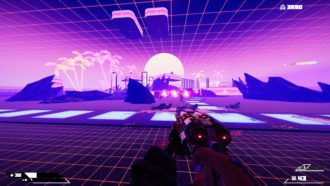 Praise must also be given to Turbo Overkill’s soundtrack. Instead of relying on the predictable twinge of heavy metal riffs we’ve seen in many a retro-throwback shooter prior, it offers an interesting mesh all the more complementary to the setting. That is to say, more electronic tracks. Variations include slow, atmospheric pieces that back the quieter, explorative platforming moments. Rich, fast-paced songs back the action, with emphatic beats that feel in tune with crunchy shotgun blasts or devastating blows. This mixing up and not doing the expected reflects the nature of Turbo Overkill: traditional and familiar, but still with plenty of tricks to show.

Single-player FPS campaigns aren’t dead. They’re alive and well in the indie scene and Turbo Overkill is living proof of that. Eight hours down and one out of three chapters released, Turbo Overkill is a wondrous shooter effort thus far. It’s silky smooth, feels good to play and already appears quite final. I ran into less than a handful of bugs that were easily resolved with a quick resetting of checkpoints. That’s better than what I can say of other games that release in early access.

Turbo Overkill is available now in its early access state on PC via Steam. Check it out. You won’t bloody regret it.