Dread Templar Early Access Preview – A dip in the underworld

Between all the other highly public indie games to come each year (be it 2020’s Hades or this year’s Death’s Door), there’s another niche slowly bubbling away in the indie space, picking up steam. That niche is quite hard to describe without sounding reductive. Largely, they can be summed up as Doom-likes, taking that beloved formula of classic FPS action and doing something really special with it. Dread Templar is but one of the latest examples of this, and it’s frankly quite a blast to play through.

Dread Templar looks at games with clear and concise narratives such as the recent Wolfenstein entries and laughs in their face. It’s not interested in telling a story with deep motivations and turns, only providing vibes to soak in. All you need to know is that you control a templar that’s entered into Hell, bent on seeking revenge. Revenge for who? I’m not quite sure, even after ending my time with the game’s Early Access state. Probably a dead wife. Let’s go with a dead wife. It always is.

The provided atmosphere to soak in within Dread Templar is fantastic. Through your plunge of the current 10 of 25 planned levels, you’ll trudge through tombs, prisons, factories, stumbling upon many a satanic ritual and altars. Level designs in this regard are really, really solid, snaking and connecting together in clever ways. If I had a small nitpick right now, it’d be the curious ways some of the explorable secret areas are implemented in the game. Quickly, this becomes a mixed bag. Some are oh so clever. Others leave you wondering how on earth you were meant to discover it.

Backing the game is a familiar audio design that absolutely harkens back to early ‘Boomer Shooters.’ Your character will make Doom-style grunts when they receive damage, effect noises when you receive pickups are oh so satisfying… it feels like home as an FPS lover. This is also bolstered by the OST on offer. It toes an interesting balance between music that feels reminiscent of the eerily electronic Half-Life 2 score and that of heavy metal video game composer Mick Gordon’s recent works.

All of this is so crucial in the experience Dread Templar is offering. If you’re going to base yourself so heavily on classic FPS games, you better put in the work. With a little under half of the experience seemingly done, it looks to be doing just that.

Classic shooter fans needn’t worry: Dread Templar’s combat also scratches that FPS itch more than adequately. If you’re looking for the combat chess game of 2021, filled with frenetic gunfire and important character placement and strafing, this is it. Combat can be exceptionally challenging in-game, and players will absolutely have to be fast on their toes if they want to make it past the plunge through Hell alive.

“If you’re going to base yourself so heavily on classic FPS games, you better put in the work. With a little under half of the experience seemingly done, it looks to be doing just that.”

Despite this clear challenge, there’s never so much that you feel too in over your head. Players will often benefit well from taking a dash or two back from the dozens of demons and Cthulu-esque foes rushing them, taking time to strategise on the fly. Similarly, taking advantage of the generously provided savepoints is crucial.

Dread Templar’s arsenal on offer is also quite expansive, even in the stages of early access. The most marketed and coolest of your toolset will be the dual-wielded katanas. Already, they make for some solid melee weapons. Though the moment you learn you can press the right mouse button, combining the two into one to be a throwable weapon, exploding a line of enemies into bloody goo is immensely satisfying.

The list of weapons that pack a punch only go on. Your bow and arrow can deal devastating damage if you nail a headshot, while your sawed-off shotgun or magnum revolver, filled with demonic bullets and runes inscribed on the stock, provide just as crunchy and mean a shot. Combine this with a provided button to slow down time, allowing for a Max Payne-esque style bullet symphony… you’re beyond powerful.

Not quite reinventing the wheel, but bending it

Where Dread Templar looks to differ itself at least a little from other recent forays into the retro FPS style games is its modern skill upgrades. Throughout your journey through Hell, you’ll often discover altars and other similar spots to spend slot unlocks that come in the form of coagulated blood. Collect enough of these and you’ll soon have quite the freed up space to slide in runes (the game’s version of upgrades) you’ll find along the way.

A fair few of these upgrades are pretty stock standard, such as adding double the amount of damage to any given weapon. However, they’re all still more than handy in their own right. I’ll take whatever bonus to my damage output I can get if it aids me in tackling some of Dread Templar’s tough bosses, be it a hellish spider or literal beating heart. If all else, working towards the final, more powerful slot and upgrade in any given branch is enticing. I’ll get you one day, skill-that-lets-me-recall-my-katana-after-throwing-it. 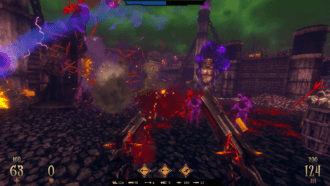 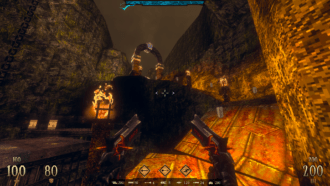 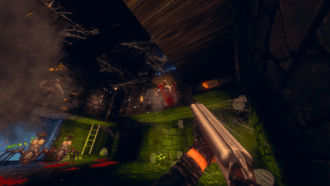 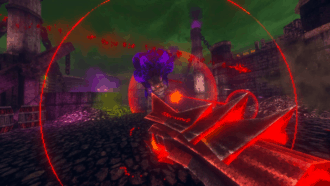 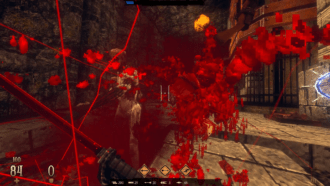 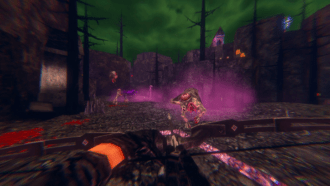 I do appreciate this addition that developer T19 Games offered. Dread Templar is first and foremost a game that tries not to distance itself too much from the scene. Instead, it focuses on doing what it does very, very well. That’s more than enough for me.

I’m a little over six hours into my venture with Dread Templar. It seems I’m also incredibly close to the end of my possible time with the game so far if I can just beat that damned Hell Knight boss. In that time, Dread Templar has both tested me and gripped my interest immensely, every step of the way. On offer is a tantalising product thus far that I can’t wait to revisit with every future update. Su-bloody-perb.