It has been hard to miss the hype around Massive Monster’s upcoming game Cult of the Lamb. This adorable eldritch horror roguelike has sparked a lot of curiosity. Personally, from the first trailer, I was absolutely sold, praying to whatever deity I could find that the hype wasn’t overrated. This is why I was so excited to be given a preview of the game which contains extra content when compared to the demo that is available on Steam now. I’ll be honest with you, it’s Game of the Year material!

Cult of the Lamb is a roguelike dungeon crawler crossed with a city builder management sim. Think Hades meets Stardew Valley with the adorableness of Animal Crossing. In theory, this doesn’t make any sense, but in practice, it is brilliant. You play as The Lamb, the last of your kind. The ‘heretics’ have been sacrificing all of the more innocent creatures in order to keep ‘The Old One’ locked up. They make a mistake when they sacrifice The Lamb, as you become The Old One’s chosen. Their request is for you to start a cult in their name and kill the heretics.

The cult management sim feels really organic within the game. You get to indoctrinate new recruits and put them to task to help out around the camp grounds. I love that you can customise each recruit and there seem to be a lot of unlockables to find throughout the game. I found a few animal forms which unlock different animal types you can give your followers. They seem to be a lot of prey creatures like deer, hedgehogs, pigs, rodents, etc.

It is your job to take care of your flock. Forage and farm for food and cook meals, build them beds and shelter, clean up their poop and vomit, raise their faith and keep them happy. In return, they’ll give you their undying loyalty and do anything you ask. In other cult sims, the members are mindless and dull. In Cult of the Lamb, it’s especially fun to interact with the animals. They run about and do their things, chatting with one another. They also ask me to do quests for them which range from collecting flowers to convincing another recruit to eat a bowl of poop. I’m a child ok, the last one made me giggle.

Not only will members do whatever you ask, but they’ll also help you increase your faith which in turn opens options in the huge tech tree available to unlock more buildings for your camp. The preview only showed a little, but I can see myself getting lost in just managing the camp and interacting with my cult friends. However, you can’t ignore your dungeoneering. There are many reasons to head into the forest which all benefit your cult. For example, you can collect mass amounts of logs and stones, find bones for rituals, rescue new recruits for your cult, and discover unlockable features. There are many rewards to be had! 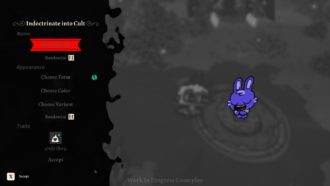 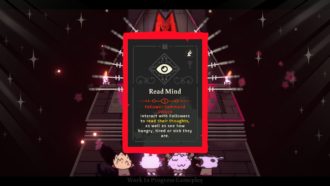 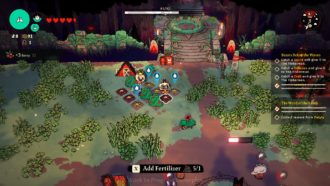 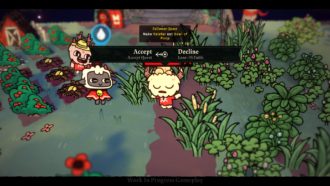 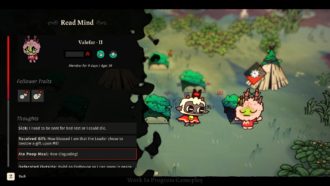 The roguelike dungeons play like a mix of Hades and Slay the Spire. The dungeons are more like a forest, but you still move from area to area. Each dungeon seems to be randomly generated so you get a new experience each time, including playing with a random weapon. The areas contain a random number of different experiences within. Most of the time there are enemies to defeat, but there are also shops, weapon smiths, bonus chests, healing spas, and a tarot card reader. The tarot cards seem to be the modifying factors of each dungeon run and are randomly selected. I did find some along the way too in chests, so these may pop up in other places. If you look hard enough, I found there are some clues near the doorways to let you know what is coming up in that direction. It’s a very cool little feature.

Combat feels great on the controller. It took a little to get used to, with the three main buttons being Attack, Dodge, and Magic. I do enjoy when there isn’t a huge complicated array of buttons to mash, especially in roguelike games. Thankfully, there is also a difficulty setting that can be changed at any time! I am not ashamed to admit I turned the difficulty down to get my bearings. There is a wide variety of critters to kill alongside environmental traps and barriers. It can get quite hectic which isn’t entirely a negative! It’s great that each session seems new and unpredictable. Death isn’t too punishing either, you’ll lose some of the items in your backpack and resurrect back in your camp. 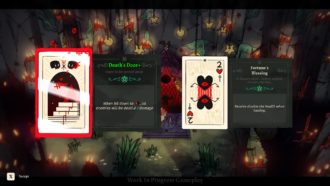 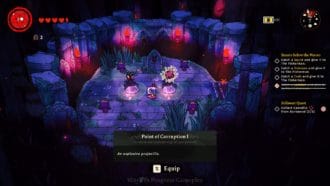 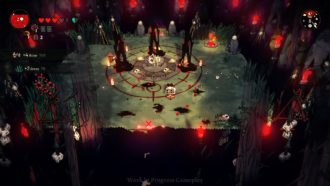 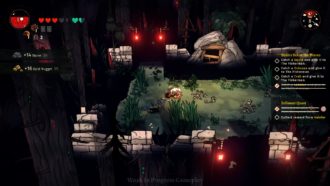 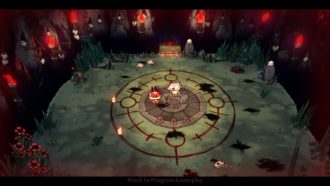 “There is absolutely more than meets the eye with this amazing new game coming out of Australia.”

Outside of the combat and cult building, there seems to be a wide world of places to discover and explore. In the preview, I managed to find 2 new areas which included some cool little mini-games and extra quests. There is a fishing mini-game that helps you collect fish for food for your cult, as well as a charming fishman who gives out quests. There is also a hut to play knucklebones with the previous cult leader. Who knows how many more places are ready to be explored and what the lore of this land unveils!

There is absolutely more than meets the eye with this amazing new game coming out of Australia. From the adorable antics of new animal friends to the challenging dungeon crawling as well as a vast new universe of lore to explore, what is there not to love about Cult of the Lamb? I am so incredibly excited and cannot wait to get my hands on the full release when it launches to PC, PlayStation, Xbox, and Switch on August 11.