Melbourne is truly the place to be when it comes to developing tennis video games. After AO Tennis 2 released a couple of years back, it’s now time for Matchpoint – Tennis Championships to go for the grand slam. Developed here by Torus Games, the difference between Matchpoint and other tennis games on the market that the team are aiming for is that it should feel like a real game of tennis, where you’re focused on strategy rather than button inputs.

We’ve spent some time hands-on with the title ahead of its launch next month, and so far, Matchpoint seems to live up to that promise.

In making a more realistic tennis simulator, shot selection is meant to be intuitive so that you’re more focused on controlling the rally – that is, pushing the ball long, wide, hitting a power shot or taking pace off the ball. The gameplay is supposed to be focused on decisions that real tennis players make, as opposed to “pushing buttons”. Torus Games said that they approached the game like a one-on-one fighting game, with the goal being to put your opponent in a difficult position by learning their tactics and capitalising on them.

Playing Matchpoint, what is instantly noticeable is the smoothness in which players move around the court. They move realistically with an impressive amount of detail in the animations. The nature of tennis games and the amount of movement in a match has led to some robotic players in other titles, but here they look fairly natural. A motion capture system was boasted, and it was noted that there is logic based on user input to pull animations from a large library. The motion capture actually took place out on an actual tennis court with no restrictions to movement, which has certainly paid off here.

In terms of how it controls, the more simple inputs do allow you to focus on the game itself; the only thing you’ll need to really worry about (once you understand some basic timing) is where on the other side of the net the ball will land. There’s no RNG location as to where the ball is going to land in Matchpoint; where you’re aiming is where it will land, so the ball should go where you want it to go. Of course, playing close to the lines will still be risky, but the system mostly works well.

“The motion capture system uses logic based on user input to pull animations from a large library.”

While the developers stressed that they don’t want you to spend time looking at button prompts (and added that most games get in the way of playing tennis rather than being more logical in their approach), you do have to spend a fair amount of time just looking at the aiming reticle on the opposite side of the court rather than watching the players. But it does feel more precise in terms of ball placement, which I appreciated when trying to control a rally or go for a winner.

Additionally, you can discover weaknesses in your opponent during a match, like a bad backhand for example, that is given to you as a tip if you expose it. That way you’ll know how to strategise against that same opponent in that match and in the future if you face them again. The weaknesses seem relatively varied, too. One player I battled struggled when you hit more than three shots to the same backhand in the same rally, while another struggled with cross-court shots. It is a nice curveball to add some more strategic thinking to the gameplay that I appreciated, even though it does sort of make it easy to exploit those weaknesses once you learn them. 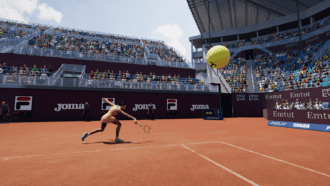 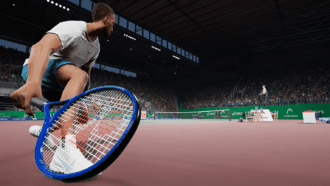 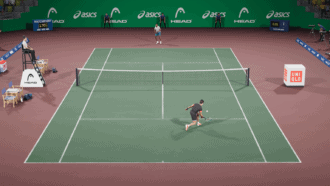 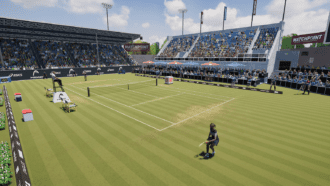 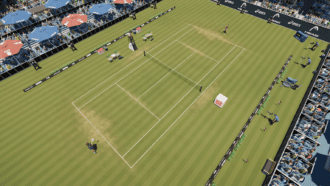 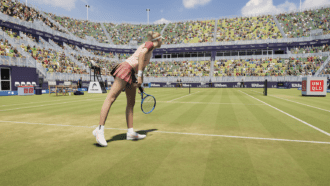 Matchpoint features 16 licensed players, including Nick Kyrgios; although the likeness isn’t quite right, it’s close enough to be identifiable as those players for the most part. It’s a shame that other trademarks and licensing hasn’t taken place, so when taking part in the career mode you’ll be competing in “Australian Grand Slam” as opposed to the Australian Open. It’s not a massive problem but it does take away some of the authenticity. Also during the career you’ll be able to unlock coaches that focus on specific aspects of your player development, with mini-games to improve those skills. It felt pretty standard to most career modes I’ve seen before, starting at a low ranking and working your way up to more difficult tournaments.

So far, Matchpoint – Tennis Championships provides a compelling new case when it comes to tennis games, at least in the gameplay department. The animations are smooth, the point-to-point play on the court makes sense and feels right; it might be the best feeling tennis game I’ve played in a very long time. On the other hand, the rest of the game feels slightly bare-bones; career feels simple, the visuals and presentation overall don’t match the presentation we’re used to when watching tennis on TV, and completely absent is the ability to play doubles, which severely limits multiplayer.

Still, if the action on the court is as solid and fluid as what I experienced, that could be enough to earn it a tiebreak victory over its competitors.

We won’t have long to wait to see for ourselves; Matchpoint – Tennis Championships launches on Nintendo Switch, PS4, PS5, Xbox Series X|S, Xbox One and PC on July 7. It will also be available on day one for Xbox Game Pass.