My Time at Sandrock is the newest title in Pathea’s ‘My Time at’ series. While Sandrock offers a different location to My Time at Portia, it still provides the same casual and cosy experience. Portia and Sandrock have similar visions, though Sandrock feels like an upgraded title due to a more experienced team. At the moment, Sandrock is in early access on PC, with the full game release and console support planned for 2023. The player takes on a builder occupation in the small oasis town of Sandrock in an attempt to help save it from an economic collapse. Does Sandrock live up to its predecessor, or are its foundations crumbling down?

We built this city

Sandrock is somewhat different to Portia in terms of plot and setting. While you play as the builder, you end up helping a lot of the residents, along with forming relationships and tight bonds. Sandrock is set in a post-apocalyptic world, for new players you find that out by talking to people and through environmental storytelling. The difference plot-wise is that instead of taking over the workshop from your father like in Portia, in Sandrock, you apply for the job and get it along with another builder named Mi-an. Throughout the game, you build products for quests, either to help out the town, like building a new stage for the Blue Moon Saloon, or for yourself. Sandrock also begins earlier than Portia but ends later, and the map of Sandrock is 40% bigger. For the most part, the plot, most characters, environment, and baddies are all new as well.

You begin the game by creating your builder with only a choice of female or male builds. The builder can either be referred to by their name or by their title. Voices, clothes, hair, and makeup aren’t locked to a gender, but beards are. With that said, there are still many options to choose from when creating your character. You can pick and choose bangs or ponytails, with an option to change the length of your hair. There are no curly or textured hair types, presenting an opportunity for more options in the future. Lastly, you can’t change the height and body types of the builder, so every character you create will look similar in those departments. Sandrock has some great diversity in some sections, but in other places it’s lacking. 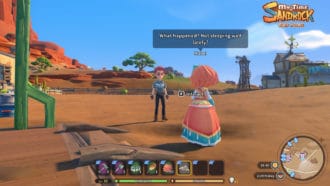 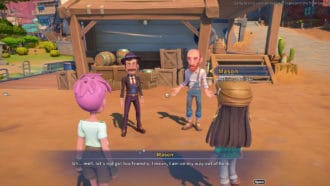 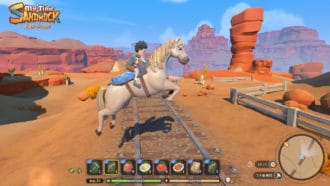 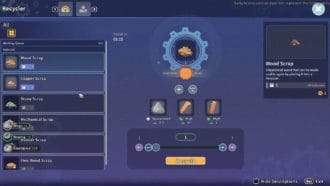 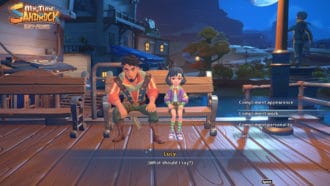 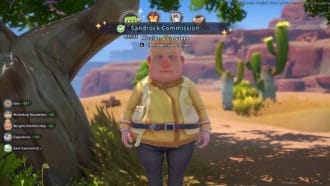 The house that dirt built

After creating your character you meet Mi-an who is already in Sandrock at the local train station. After introducing herself, the two of you make your way to meet your “supervisor” Yan. He tells you about Sandrock and life as a builder in the quaint town. You also meet the outgoing builder, Mason, who is somewhat standoffish to your hopeful demeanour. Mason is a character who you can meet in Portia as well, as he ends up retiring in the town. You also end up taking over Mason’s old place and taking care of it, also able to name it something too. Yan mentions that Sandrock doesn’t have a lot of trees, so it’s frowned upon to axe any. However, there’s plenty of driftwood, broken down boxes, and piles of wood scraps that you can find wood in.

The game itself doesn’t necessarily hold your hand, as a lot of the knowledge you gain is through trial and error. But if you’ve played Portia before, the mechanics are pretty similar. With that said, I found some of it a bit daunting and hard to master. Thankfully an extensive tutorial page is on offer. Sometimes you’ll also get reminders in the top left corner about certain things too. Where the game currently lacks clarity is when it fails to clearly show the player where the next goal is. Objective markers can be too small and also don’t show up on the minimap. The game would benefit from having clearer waypoints.

The game allows you to play however you want and at whatever pace is comfortable. This is great for players who often feel like a lot of these sandbox building sims get ahead of them. Being able to slow down the passage of time is a double edge sword though, as it lets you do everything you need to do, but by 6pm (in-game time), everyone has left work to go home so shops aren’t open and you can’t even chat with friends or potential suitors.

Even with that said, the game’s characters are all so unique. Even if your builder can’t change their body type, there are characters who are tall, short, fat, and skinny. There are characters of different races too which is welcoming to see. There is even a child character named Jasmine who you meet on your second day who gives you a tour around town. There are also a couple of animals in the town, however, you cannot pet any… yet.

The graphics of Sandrock are overall very cute and fit the theme of the game. It falls into this 3D toon style, similar to games like the Animal Crossing or Harvest Moon series. There is an ability to scale them down or up depending on the performance of your PC. With all that said, they’re still beautiful graphics to stare at your favourite character in awe. While it might not be hyper-realistic, it definitely has its own charm. The scenery and the environment take the cake and there are also 2D drawn images throughout the game that look superb, whether they be of characters or objects. These 2D images complement their 3D counterparts, feeling as though your character has drawn them themself.

Meanwhile, on the accessibility side of things, Sandrock allows you to remap your controls. However, the keys for use, toolbar, mission tracking, and main menu aren’t remappable. There are automatic subtitles but there is no ability to change the sizing or font for users who might want to use a dyslexic-friendly font. There are also no closed captions so D/deaf and hard of hearing folks can’t see where the sound is coming from and what is making it. Sandrock doesn’t have a colour-blind mode, and all of the different things in the menu can become overwhelming for some. Hopefully, throughout continued development, we get to see more updates made in this department.

“The sound design itself is great and the music is fun to listen to as you go about your daily routine.”

Along with the graphics, the voice acting of Sandrock’s residents fits in with the place. Some dialogue doesn’t appear to be recorded yet, but I’d anticipate that’s simply due to the early access nature of the game. The sound design itself is great and the music is fun to listen to as you go about your daily routine. The ability for sound to change depending on what surface you’re walking on is always fun to hear.

In addition to Sandrock’s overarching plot of trying to help build the town out of economic collapse, you find a lot of wanted posters around of a bandit named Logan, akin to old wanted posters in the wild west. Players of Sandrock will see Logan in the initial cutscene as he watches the builder’s train come in. You find out that Logan used to be a citizen of the small oasis town until he turned to a life of crime. Throughout the game, you’ll get more information about him, his partner in crime, and what the townsfolk think of him. There’s even a quest to help Pen, the local protector of the town, put up wanted posters. Helping out people around town can give you points towards relationships and even give you rep points for your builder cred.

Sandrock has a relationship builder in it. With this you can befriend people, give gifts, spar, and even play a game of Critters, which is their version of rock paper scissors in card game form. You’re able to gain points towards the relationship by playing Critters no matter if you win or lose. You can play Critters 3 times and, depending on your placement, you can gain points. Sparring gives you points towards the relationship if you’re successful, and you can only give gifts once per day. You can also gain points if you complete commissions for the townsfolk. They’re usually crafted item/s within an allotted time, you’ll find them in the commerce guild where Yan is. You can only complete one commission a day. You can also romance and marry someone in the game, the player has the option to romance anyone regardless of gender.

My Time at Sandrock is still in early access. The current full release year is 2023, with the game coming to consoles at that point. Pathea has some work cut out for them, and are already building towards the full game release. With it being in early access, some things are still in development, like multiplayer which is still in its early stages. Changing of seasons is also in development, with some seasonal changes already in effect, but nothing wild yet. Lastly, Pathea is including one of their Kickstarter stretch goals in a future update, where you can watch your children grow up.

My Time at Sandrock has been a blast to play, and like our review of My Time at Portia in 2019, it’s hard to put the game down. Hours will have passed by and suddenly it’s 3am! It’s been fun discovering new things within the game, and getting to know the cast of characters and the plot at hand. While Sandrock isn’t finished yet, it’ll be exciting to see where the game goes in the future. Here’s hoping that with it being in early access, Pathea can iron out some of the kinks. The full release can’t come soon enough.

My Time at Sandrock is available now in early access on PC via Steam and the Epic Games Store, with a 2023 release year for consoles.