INCISION is an FPS that pits players through apocalyptic and blood-drenched industrial complexes, dilapidated cityscapes, and alien structures in a hellish journey. It is another title joining the somewhat crowded but passionate indie boomer shooter love-letter scene. In turn, it doesn’t reinvent the wheel in the slightest, but offers some of the best flavour text for the action-shooter genre I’ve seen in a while. INCISION is a bloody delight.

If you were to ask me what the premise is for INCISION, I’m not sure I’d be able to give a definitive answer. Let’s be real, a narrative isn’t what the audience is here for. They’re here for a bloody good atmospheric time. INCISION does just that. You’ll explore tunnels and cave systems made of blood, gore and membrane. Thousands of litres of ichor will flood out of industrial pipes and flow into rivers. Tentacles made up of dead matter will snake their way in and out of the halls and windows of a skyscraper. Alien statues and tributes create a weird and unnerving dread as you try to make sense of it all. Every step you take, whether it’s cautious crawls through the dark depths or sprinting and blasting through corridors, is filled with wonder and horror.

Accompanying all this is a low poly art style. You’ll work your way through action set-pieces that feel like a lovechild of the traditional classics in Doom and Quake, and modern classics like DUSK. Bouldering, burly soldiers will throw disc blades at you that will then bounce around the rooms, becoming a new challenge to manoeuvre around. The head of alien worms will be burrowed out of ceilings, firing rocket projectiles at you like a turret with high firepower. Even echoes of Half-Life 2 are present as suited-up soldiers somewhat resembling the Combine can be found firing plasma ammunition your way. In true retro fashion, the only semblance of a HUD is three key elements, represented only in numbers. These being your lives, health, and ammunition for the currently equipped weapon.

Backing this is a soundtrack that blends atmospheric sci-fi horror droning and metal, adding to the ambience. What this leaves the player with isn’t a hodgepodge but a satisfying boiling pot of ideas all in one enticing, dreadfully good package. 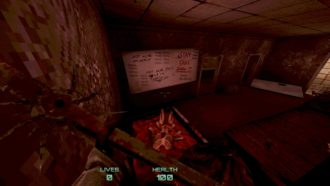 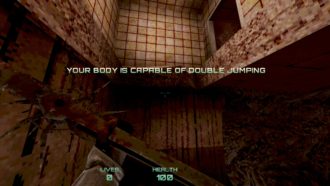 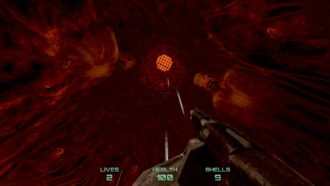 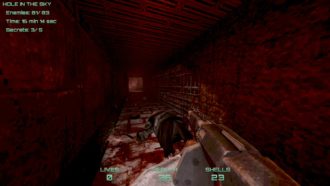 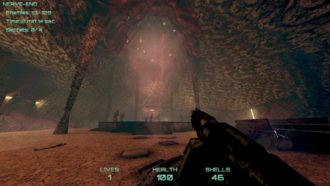 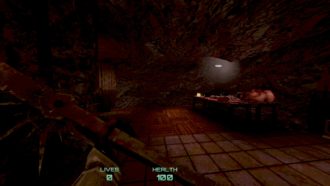 INCISION also makes for a smooth and satisfying to-play shooter. Strafing and always being on the move is key, and thankfully movement is fluid and helps facilitate this play. Early on, you’re faced with a platforming section and text pops in, reading ‘Your body is capable of double jumping,’ and so you learn of this very ability. Before long you’re hopping around, dodging projectiles and firepower headed your way, popping and shotgunning demonic entities in the face.

In true boomer-shooter fashion, INCISION also offers a diverse set of weaponry. A rocket launcher, assault rifle, magnum, shotgun, minigun, and grenade launcher that fires explosive fleshy matter make up this arsenal. A majority of these come with their own alternate fire too; the shotgun can rapid fire and the magnum can too – coming with a stylistic animation where you’ll constantly spin the gun off your finger as you fire like you’re at home in your own Western adventure.

The closest INCISION has to a gimmick is the melee weapon which comes in the form of a stick with a buzzsaw on the end. The alternate fire allows you to actively turn on the saw, holding the stick out for more bloody reach, and cutting up foes. This is used in certain locations to cut demonic tumours and unlock further paths (an alternate to Doom’s coloured keys if you will). It makes for a joyous if brief palate cleanser in your weapon swapping as melee combat doesn’t tend to be found in the genre.

INCISION also is quite a challenge. No checkpoints are present and instead, players collect lives. Run out of lives and you have to start the entire level again. Though a tough pill to swallow at first, it does encourage learning levels intimately and growing smarter with your weapon usage. This plus the locating of secrets, and ensuring you killed every enemy will help add to the clock of bloody fun to find.

I’ve spent about three hours with the seven levels INCISION has on offer so far. In that time I’ve had a couple of boss encounters that are chaotic and require frantic dodging of Area of Effect attacks. I’ve spent time restarting levels, at times challenged by the game’s difficulty. I’ve found delight in the explosive gunplay. Largely, I’ve been captivated by the flavour text and shiny, eerie coat of paint offered. INCISION does nothing new for the genre but it does serve as a damn good entry.

If you’re just after a vivid and riotous shooter to lose some time in, INCISION should be high up on that list. It’s available now in Early Access and you should absolutely check it out.