The Dark Pictures Anthology: The Devil in Me Hands-on Preview – Five Nights at Jigsaw’s

Supermassive Games, connoisseur of the narrative adventure horror game, are returning next month with their latest in a string of releases dubbed their ‘Anthology’ series. The Devil in Me is the finale for Season One and the fourth game overall, following on from House of Ashes last year.

Since it’s almost Halloween, it seems appropriate that we got an opportunity to go hands-on with this spooky title. Though with The Quarry releasing only a few months back and setting quite a high bar, Supermassive certainly has a lot to prove with this upcoming release.

The Devil in Me tells the tale of a small film crew who are given the rare opportunity to film in an ideal location. A modern-day replica of a serial killer’s “Murder Castle”, the game’s setting is appropriately horrifying and a more than adequate locale for a macabre documentary. Led by Director Charlie, there’s a desperation that lingers over this crew, needing their next project to be the one that breaks them into the limelight. Bickering between Charlie and his crew of young adults is the least of their worries as they quickly discover they are trapped in a building that is more ‘Murder Castle’ than replica.

The gameplay found within The Devil in Me is par for the course for Supermassive’s horror adventures. Playing as different characters throughout the preview, you’ll spend a good amount of time exploring the castle in limited bursts from the third-person perspective. nestled between character-developing cutscenes, you’ll be searching your surroundings, uncovering pieces of ludonarrative often in the form of notes, and making decisions that impact how the characters see one another. In the preview, I also had to make one decision with the implication of a potentially life-or-death outcome. However, the full weight of that decision may not be fully appreciated or understood until the full release. Theoretically, your actions or inactions may have dire consequences on the survival of these characters, as is the general formula for this type of game.

Other Supermassive mainstays can be found within The Devil in Me, including a narrator-type figure who jumps in cryptically in-between chapters, adding further depth and atmosphere to the unravelling story. We also see the return of premonitions of character deaths, which can theoretically help you avoid a grisly demise now that you have more information on potential outcomes. Strangely I saw the same death premonition twice within the preview, something I’m guessing and hoping won’t be included in the full game.

Much of the actual scares found in the preview centred around creepy animatronics set up around the house. These created some effective jump scares backed up by a threatening aura of unease as you feel yourself being watched and toyed with. The bones of a good horror game are found within the preview, even if the production values of the visuals and lip-dubbing feel a little dated.

With about 70 minutes of content on offer, the preview of The Devil in Me gave a taste of what to expect without fully satiating my curiosity. We got to see elements of a Saw-inspired death game as well as a serial-killing backstory. I’m interested to know where this goes, if it’s a fakeout, or if supernatural elements enter into the game at some point. 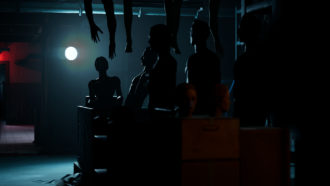 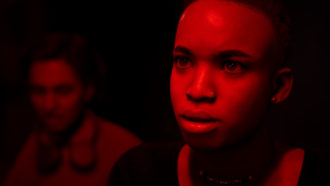 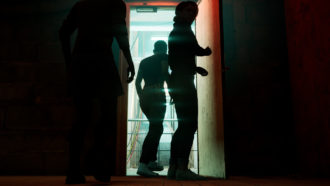 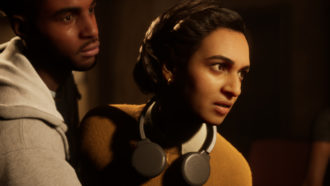 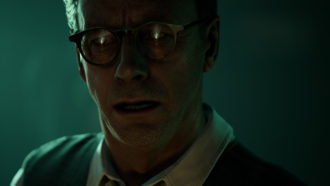 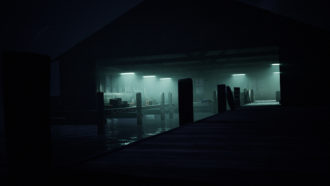 Where The Devil in Me differs from past Supermassive games is in the characters and how the equipment they carry changes how they can interact with the world. Almost like a class system in an RPG, each film crew member brings their own unique gear that impacts their gameplay. Sound Engineer Erin has a device that can locate sounds through walls, allowing her to follow the source of sounds around the maze-like halls of the castle. Cameraman Mark can snap photos and use his camera arm to knock things down from higher places.

The different equipment makes for an exciting evolution of the standard gameplay, though not all characters and gear are as interesting as others. The gameplay segment involving Erin and her sound device was fun and tense. Compare that to Charlie’s ability to occasionally open a locked drawer using his business card and you can see the vast disparity in uniqueness.

“…each film crew member brings their own unique gear that impacts their gameplay.”

After 70 minutes of the game’s preview and I’m not personally sold. I like the setting but nothing about the characters has gripped me yet. They’re just not quite likable enough, though that may be an issue specific to the vertical slice of game I’ve experienced and not an issue found in the full release. Thankfully the setting and puzzle-centric gameplay are enticing enough to potentially make up for any character shortcomings.

The Dark Pictures Anthology: The Devil in Me is set to release on November 18 for PC, PlayStation and Xbox platforms.