Scars Above dumps you on an alien planet full of creepy aliens and demands that you survive, while offering much to explore for scientist Kate, who is just as interested in discovering and analysing the mysteries in front of her as she is at trying to get out of this situation alive.

After playing the first three chapters of the experience, Kate is quickly likeable as a capable and curious scientist, able to hold her own in combat but equally happy nerding out about her surroundings. This is baked into the gameplay and ongoing dialogue as you explore your strange environment; you can analyse the various flora, strange alien artefacts and of course the beasties who are out for your blood. Analysing them gives you knowledge, and knowledge gives you upgrades, so it’s worthwhile doing.

Additionally, some forms of analysis go a little bit deeper, allowing you reconstruct scenes with AR so that you can learn more about what has happened on the planet. Analysing material is simple, yet satisfying, and provides a nice break from the combat found throughout, which can be dangerous and challenging.

“Analysing material is simple, yet satisfying, and provides a nice break from the combat found throughout…”

Scars Above has been referred to as a soulslike, but really it’s a souls-ish. Comparisons can be drawn from its difficulty, though the enemies here are largely easier to telegraph, with highlighted weak points giving you clear targets to aim for. If you die, you’ll head back to the recent checkpoint, regaining all your health but respawning enemies – but that’s about where the comparisons stop. You won’t lose XP gained. You will however have to replay and rediscover areas you’ve just fought through, so repeating dialogue and skippable feel out of place.

A core difference is the third person shooter focus that Scars Above employs. There’s a melee attack that’s only useful for smaller grunt enemies, but most foes will require you to take advantage of their elemental weakness so you can nail them with massive damage. Three guns were present in my playtime, one that’s an electric shock (useful with water-foes), a fire gun and also a freeze-gun that literally stops enemies in their tracks.

Enemies can be dangerous until you learn how best to take them down; one ape-like rock creature has a week point on his chest that’s only exposed during certain attacks, while another big brute requires you to get behind him (which is where freezing comes in handy). Combat, then, feels like a puzzle of sorts, although with multiple enemies on screen, things can go south quickly. One spits venom at you, and the toxicity slowly drains your health; you’ll eventually discover a way to use resources to counter this, but it’s a pain and can slow you down. 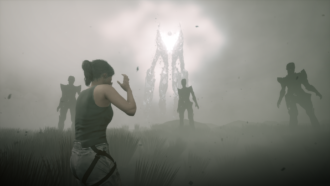 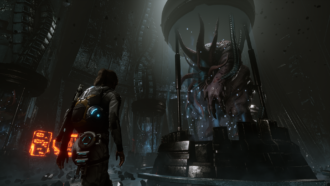 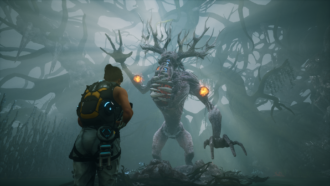 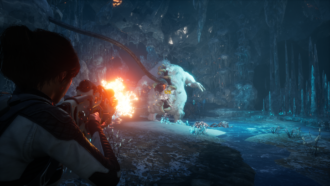 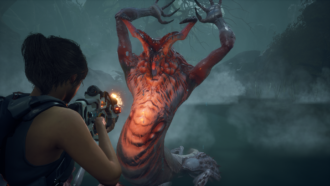 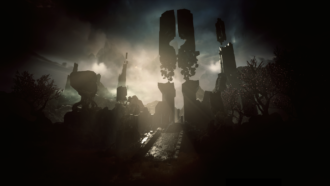 Combat can be slow and clunky at times, with Kate herself being a little bit slow to move around and reload. During one boss battle, even sprinting and diving wasn’t enough to get me to safety, and that dude hit pretty hard. Still, the boss scenarios I encountered were some of the most creative fights I had in Scars Above. One requires you to burn holes through ice so that you can trap them and disable them, which is pretty neat.

Cleverly, the guns are multi-purpose for puzzle solving and survival, as well as combat. The ice gun literally lets you create frozen pathways in previously inaccessible areas, while your fire weapon prevents you from getting hypothermia in colder areas. I’m curious to see how the weapons and gear I’m yet to unlock will impact the game overall, both on a combat level and on an exploration level.

Visually, each of the areas felt distinct. While the first zone made me roll my eyes with standard swampy, forest-like environments, the second zone was filled with red and pink trees and stranger alien artefacts towering over key areas, while the third was more snowy and frozen over, which also effected the enemy types present. Scars Above didn’t grab me with its art-style to begin with, but it grew on me and improved the more that I played.

That was really a theme for my entire time with the game so far, actually. What comes off as a bit generic and expected at first grew and evolved over the course of my several hours playing, with the environment gaining more colour, the combat clicking into place more and the investigation of the strange goings-on firmly keeping my attention. Despite some slightly rough edges, if the rest of Scars Above continues on this trajectory, we may have a satisfying little sleeper hit on our hands in 2023.

Scars Above is set for release on February 28th for Xbox Series X|S, Xbox One, PS5, PS4 and PC.