Earlier this month, Complex Games released the Duty Eternal DLC for Warhammer 40,000: Chaos Gate – Daemonhunters, the single-player turn-based tactical strategy game set in the Warhammer universe and published by Frontier Foundry in May this year. In our view, the base game was a fun strategy ride. When it comes to the Duty Eternal DLC, fans of the base game can rejoice; while the DLC might not add an entire new campaign to the game, it does add more in-game missions to the mix, as well as two new classes: the Techmarines and the Venerable Dreadnought.

Unlike plenty of other DLCs, the Duty Eternal content doesn’t require players to finish the base game before they can embark on any extra content. Instead, the Duty Eternal DLC kicks in after day fifteen of the main campaign and adds more missions to the story alongside the existing content. Story-wise, you’ll receive an unexpected message from some fellow brothers-in-arms fighting off a new threat known as the ‘Technophage virus’. Once you come to your companions’ aid, you’ll discover that the Nurgle Bloom has mutated and a new virus is affecting the machine spirits on several planets, generating new and lethal Nurgle enemies in the process. In order to contain these new threats, you’ll unlock the Techmarine units, which come with their own perks, quirks, and tech trees. After the story battle introducing the virus, you’ll able to select ‘Technophage missions’ on the travel map. During these missions, you’ll be able to include the Techmarine in your battle squad and have them gain XP after each mission.

You’ll also be able to use ‘archeotech’ from then on, a currency used to unlock upgrades unique to the Techmarines. To get archeotech, however, you’ll need to either travel to dedicated excavation sites on your ship’s travel map or recover archeotech caches during missions. If you choose the latter, you’ll get an alert at the start of a mission which points to the archeotech site on the battle map. Often, archeotech caches are nestled away in a hard-to-reach corner, which can add a welcome challenge to existing missions for motivated players.

“…missions where the Dreadnought do come in are a delight to play.”

So, how useful are the new classes on the battlefield? Known for being part of the Adeptus Mechanicus cult and having extraordinary technological skills, the Techmarine units are the warrior blacksmiths among the Space Marines. Gameplay-wise, these units come with unique armour, Omnissian axes, and dedicated combat servitors. Practically, they function more like support units in the heat of battle. With moves including support fire, boosting friendly units’ armour, and the ability to deploy combat servitors for blast attacks, Techmarines can be useful when you’re trying to keep friendly units alive or boost your knights’ coordinated attacks. However, their abilities truly shine when they fight alongside Duty Eternal’s second class: the Venerable Dreadnought. 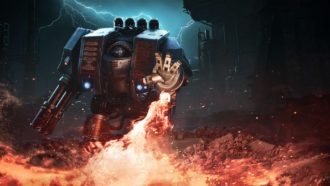 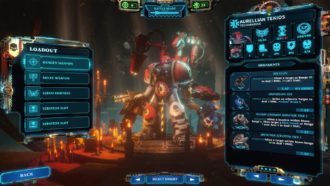 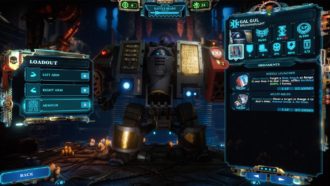 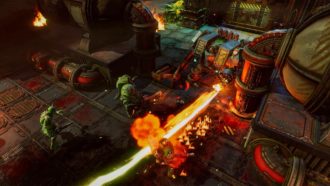 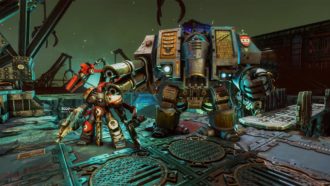 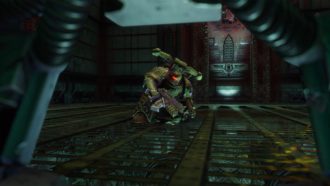 Available during select story missions, the Dreadnought is an impressive mechanical heavy infantry unit that comes with devastating moves including a blast attack, an ability to charge forward and run over enemies, and the ability to blast support attacks for other units in your squad. As long as they don’t run out of Action Points or ammo to perform attacks, the Dreadnought are a force to be reckoned with and an absolute joy to play. While the Techmarine class adds variety to Warhammer 40,000: Chaos Gate – Daemonhunters, it often feels like they’re merely there as the support cast to other units: their moves can be useful, but often don’t have much influence on the outcome of difficult missions. The Dreadnought, however, steal the show, unleashing devastating attacks that are incredibly satisfying to watch.

That said, the missions where the Dreadnought do come in are a delight to play. The DLC is worth picking up for those missions alone. Added to this, Techmarines add a nice dose of variety to the overall story and gameplay. For anyone who was a fan of the base game to begin with, the DLC will be sure to bring more depth to an already enjoyable game. However, folks who were not huge fans of the base game’s core gameplay straight off the bat might be better off skipping Duty Eternal and trying a different Warhammer strategy title instead.