Ever since we got our first look at Fire Emblem Engage, I’ve been split two ways. On one hand, I have loved the series ever since Fire Emblem Awakening and had been keenly awaiting a new mainline title. Engage looked great, but the introduction of what seemed like gatcha pull mechanics, similar to the massively successful mobile game Fire Emblem Heroes, gave me pause. Had Nintendo been lured into ruining this new Fire Emblem game with predatory monetisation tactics? Thankfully not: after getting my hands on a preview of the game, I breathed a sigh of relief. It’s good old Fire Emblem, with the randomised pulls only a small and optional part of the game.

The first thing to notice about Fire Emblem Engage is how stunning it looks. This is probably one of the best-looking games on the Nintendo Switch, and if you have the benefit of playing on an OLED Switch as I did, it looks even better. I spent the first few cutscenes with my jaw on the floor just watching the dazzling opening song and introduction cutscenes work their magic. It’s so good that it almost distracts me from how stupid I find the female protagonist’s outfit.

The story so far seems like classic Fire Emblem fare. No multiple branching storylines this time, just a linear story (at least, as far as we know). I’m glad for a break from the branching paths, as completing them all can get pretty exhausting.

You play as Alear, a dragon child who has awakened after 1000 years of slumber to face an old enemy, the fell dragon Sombron. Your journey will take you across four neighboring countries in order to find the 12 Emblem Rings, ancient relics that house the spirits of heroes of the past. The game starts you off with Marth, but I quickly obtained Sigurd and Celica, and I can already see more on the horizon.

Equipping these rings to your units will bring forth the spirit of that hero to stand alongside your unit in battle, and gives them powerful abilities and weapons. On top of the main 12, which are obtained at set points within the story, you can try your hand at random pulls of the more minor characters from past games, like Eliwood, Hector, and Saber.

These lesser emblem rings just provide stat boosts when equipped, and you can ignore them entirely if you want. The idea seems inspired by Fire Emblem Heroes, but I’m certainly glad that you don’t have to pull for the main 12, which was my main fear. 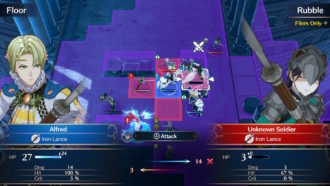 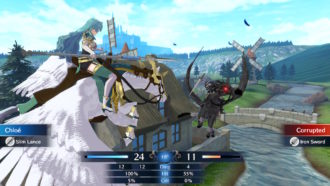 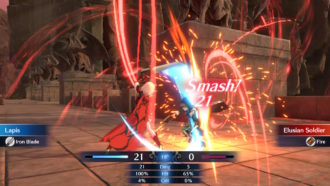 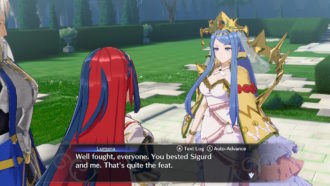 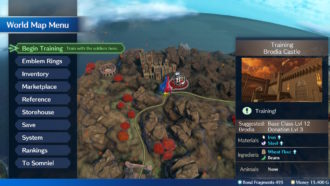 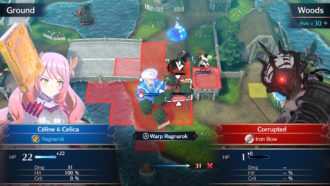 As for the meat-and-potatoes gameplay, it brings back most core mechanics of classic Fire Emblem. Seriously, there are no huge overhauls here: if you’re at all familiar with Fire Emblem, you can hit the ground running. It leaves behind what Three Houses brought into the series, like weapons training and battalions. A new element called Break allows you to disarm an enemy if you have the type advantage, which adds a much-needed layer to the old weapon triangle. Some even older concepts are back too, like fog of war on some levels.

Weapons in general have been changed a fair bit, and I’m not sure if I like it better than Three Houses — I’ll need to experience more of the game before I form an opinion. After you complete each map, you can run around the map on foot and chat with your allies, as well as hunt for items that may appear on the map, as well as local animals you can adopt and bring back to the Somnium. It’s little more than a curiosity, but it’s great for showing off how great the battle environments look!

When you’re not mid-battle, you can retire to the Somnium, a fortress in the sky that acts as your army’s home base. Like Gerreg Mach in Three Houses, you can train, restock, chat, fish, and eat meals with your allies, and more. It’s a beautiful hub area, even if it looks a little empty right now… the game helpfully informed me that it would get a little more lively later. Support conversations with your allies and your emblem heroes mostly take place in the Somnium, which so far has been a lovely backdrop for them.

My time with the first few chapters of Fire Emblem Engage has made me that much more excited to play the full game. I’ve been put mostly at ease with what I’ve seen, but I have a few remaining doubts that Engage will knock Three Houses off the top spot as my personal favourite title. Watch out for Checkpoint’s review, which will be uploaded a bit closer to the release date!