Players can then upload their stage onto the Smash Bros’ online service,  and download stages made by others. Some people have gone a bit silly with it, creating jokes, memes, and dicks… so many dicks. Moderators are hard at work taking down any stages that violate Nintendo’s Terms of Service. But what Nintendo considers inappropriate isn’t just penis stages, as we were about to find out.

Twitter user Warm Safflina made a disheartening discovery when she found that a stage she’d uploaded,  a simple platform bearing the transgender pride flag, had been taken down and her account suspended. As she describes in a series of tweets,  she was quickly informed by a Nintendo customer service representative that her stage had violated Nintendo’s terms of service. Why? For containing a “political statement”. Here is the offending stage: 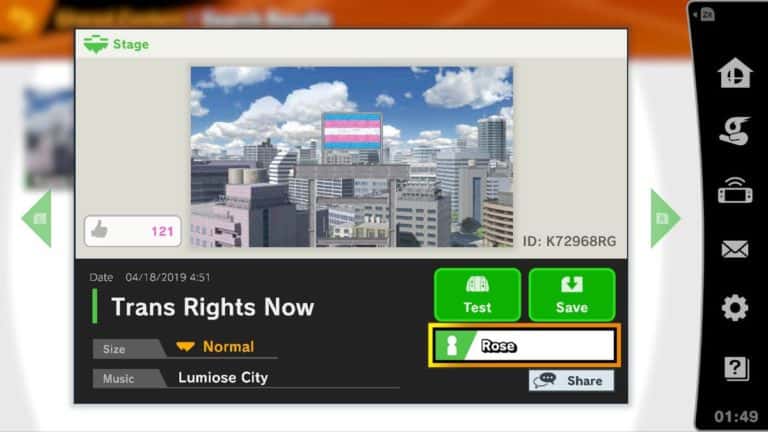 The only aspect that could conceivably be interpreted as a political statement is the title. This was not just an algorithm at work, either: Warm Safflina’s stage had been specifically targeted by a moderator as inappropriate for Smash Bros’ online service. But curiously,  Nintendo’s ToS does not mention anything about political statements. It only disallows“engaging in or promoting any discriminatory, defamatory, hateful, obscene, physically dangerous, or otherwise illegal, fraudulent or objectionable conduct in connection with the Service.” This has a lot of unfortunate implications: if that wasn’t the reason for the stage being removed, then what was?

Sadly, this is a song and dance that is far too familiar.  Too many people still view open acknowledgement of transgender people and rights to be inherently political; even when it comes to stuff made for fun, like this custom stage. Platforms sometimes prefer to take down or flag LGBTQIA content because they don’t want to be seen “taking a side” in a political issue.

Unfortunately, this will be read to many as Nintendo taking a stance on the opposite side, which is incredibly disappointing to its fans. This isn’t the first time Nintendo has let down their LGBT fans either: The 2013 3DS game Tomodachi Life didn’t let Miis of the same gender marry, despite it being a light-hearted and silly life simulator where players should have been able to cater to their own experience. 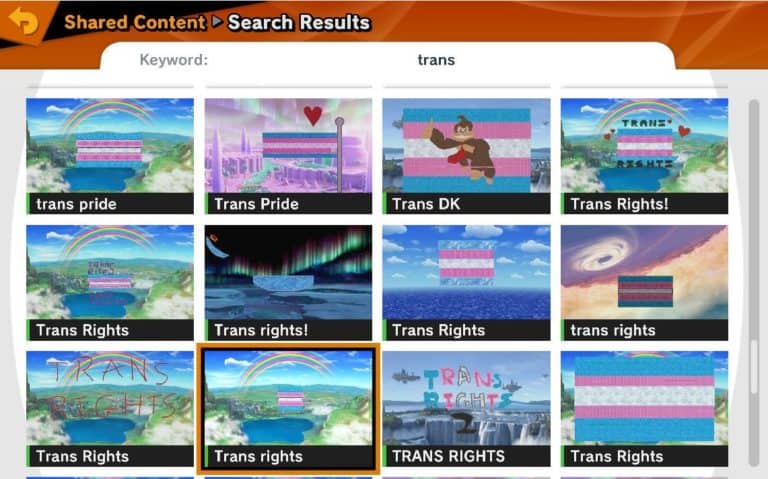 We never got same sex marriage in Tomadachi life, but in the case of Smash Bros. custom stages I don’t believe Nintendo will stand their ground as much. In the place of Warm Safflina’s removed stage has sprung dozens of similar stages, all celebrating trans pride.

It’s pretty clear: Smash Bros players don’t think the removal is fair. The good news is that while explicit jokes and offensive material are being removed quickly, the majority of these stages are being left alone. Hopefully, this is a suggestion that Nintendo is reconsidering its position.