A Final Fantasy TV show has been announced

Looks like The Witcher isn’t the only fantasy video game series to get its own TV show. Sony and Square-Enix have announced a live action TV series, set in Eorzea, the setting of Final Fantasy XIV. It will be produced by Hivemind Entertainment, the production company behind the upcoming The Witcher show, as well as The Expanse.

Details of what the plot will look like are still under wraps. However, it has been announced that it will explore “the struggle between magic and technology in a quest to bring peace to a land in conflict”. Final Fantasy staples, such as “magitek and beastmen, airships and chocobos” will be present. It is based on the setting of Final Fantasy XIV, the franchise’s MMO entry. As such, the producers will have more room to tell an original story than if they adapted one of the more traditional single-player titles. 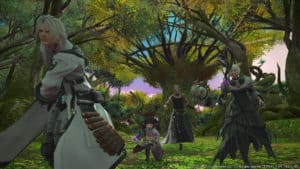 The Final Fantasy franchise itself is no stranger to cross-media adaptations. Popular entries in the saga, such as VII and XV have received CGI animated film spin-offs. Square even attempted an ill-fated animated movie in the early 2000s with Final Fantasy: The Spirits Within. This will mark the first time that the franchise has been adapted into live-action adaptation, however.

The show is in the very early stages of planning, so info regarding casting, and which streaming service will distribute it, is still undecided. Spin-offs of the Final Fantasy franchise are known to be hit-or-miss, so the success of a live-action TV show is far from certain. However, Final Fantasy XIV endures as a popular MMO, so there is a built-in audience to see it realised on television.

Adapting the setting of the MMO, rather than the direct plot of one of the single-player entries, is probably the way to go. Detective Pikachu succeeded by adapting not a mainline Pokémon game, but one of the more obscure spin-offs. This gave it the creative freedom to make it more accessible to general audiences. Hopefully the upcoming show will be better than the general standard of live action video game adaptations.