With DOOM Eternal  mere months away (November to be exact) fans of the series will have plenty to pass the time as the original classic trilogy just got a re-release on all major consoles plus mobile. Yes, at QuakeCon 2019 it was announced the original DOOM, DOOM II and DOOM 3 are available to download now. Interestingly Nintendo’s eshop apparently jumped the gun and listed the games for sale earlier in the day before taking them down until the opening key note speech at QuakeCon had concluded.

The original DOOM was released in December 1993 and quickly became a phenomenon. It has made its way to pretty much every console in every generation from the SNES to the Sega 32X even the Atari Jaguar and 3DO got their port in the 1990’s. DOOM was one of the titles that had the dubious honour of featuring in the 1993 Congressional Hearings on video game violence alongside then controversial Night Trap (Sega) and Mortal Kombat (Midway).

DOOM also played a part in drawing the line between console and PC gamers at the time, with map editors and deathmatch capability it spawned LAN parties and had pseudo 3D graphics that were just not possible until the 32 bit days and even then the PlayStation and Sega Saturn struggled to keep up. Despite consoles getting their eventual ports, the PC was always superior and definitely the place to play, each and every port was missing something whether it was levels, a dodgy frame rate or music.

It is a testament to the design of these original titles that they still play well even today, if you can forgive the sprites. There is something to putting the guns away and using the chainsaw that is still fun. Of course it lacks features that are now genre standards such as precise aiming but it works. DOOM and DOOM II are priced at about $8 with DOOM 3 setting you back $15 here in Australia on Nintendo Switch, Xbox One and PlayStation 4. Of course if you want to play on PC you can find these titles all over the internet free. 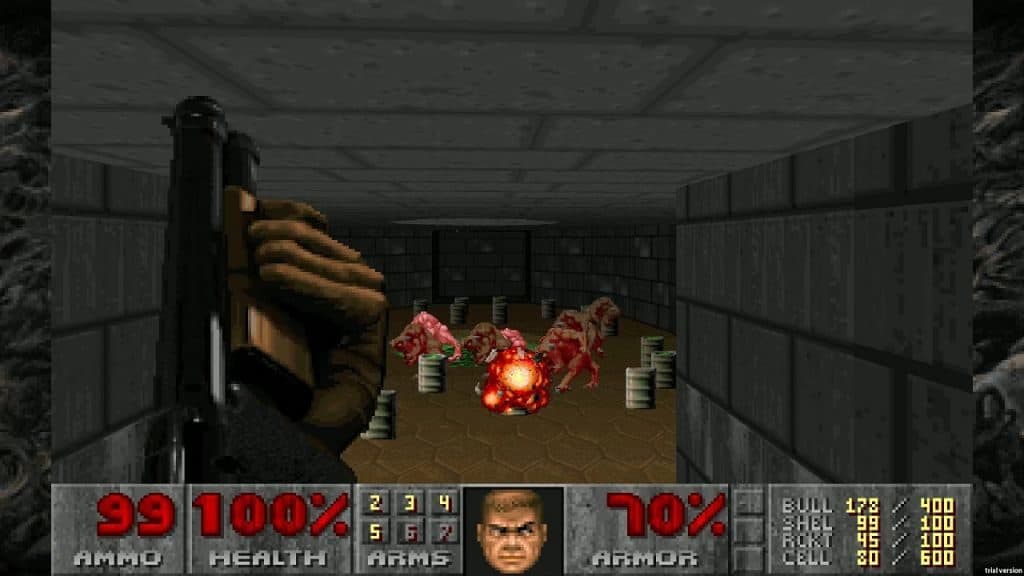 My own experience from DOOM was hearing about it at school from my friends who had computers, my first time playing was the Sega 32X version. But when a friend had a computer and got DOOM II I knew it was time to ask my folks to upgrade the Amiga 500 to a PC compatible to play it. It permeated popular culture and is one of those games that is known by non-gamers, even sampled in a Smashing Pumpkins song at the time.

Long live DOOM. If you are one of the few that never played it, definitely pick it up via your console or method of choice and check it out. Just make sure you have a Bethesda account.