The week-long charity event ‘Summer Games Done Quick (SGDQ)’ has just wrapped up, with an absolutely amazing result. More than $3 Million USD has been raised for charity! This beats out their previous record of approximately 2.2 million by a huge margin. Every penny of the 3 mil is going to Doctors Without Borders, an international medical humanitarian organisation that provides aid to those in conflict zones, among other things.

Games Done Quick is a streaming event run bi-annually by a community of speedrunners. Speedrunning is the act of completing a video game in the shortest possible amount of time, often using glitches to skip parts of the game. These speedruns can be incredibly entertaining to watch, and Games Done Quick uses this to their advantage by holding two different week-long charity drive events. Awesome Games Done Quick, which is held in the beginning of the year for the Prevent Cancer Foundation, and Summer Games Done Quick, held mid-year. These events have been consistently increasing the amount raised each year, due to increasing interest and clever donation incentives.

Here are just some of my highlights of SGDQ 2019:

In total, more than 100 games were run, with players showing off their dedication and skill at playing video games super fast. The last run of the event was a glitchless 100% run of Chrono Trigger, meaning that the runner had to complete every single quest without the use of any glitches. The run took almost 6 hours, during which the runner called for a last-chance boost of donations. The money flooded in, pushing the total donation amount over $3 million during the final minutes of the run. You can watch the magical moment here. 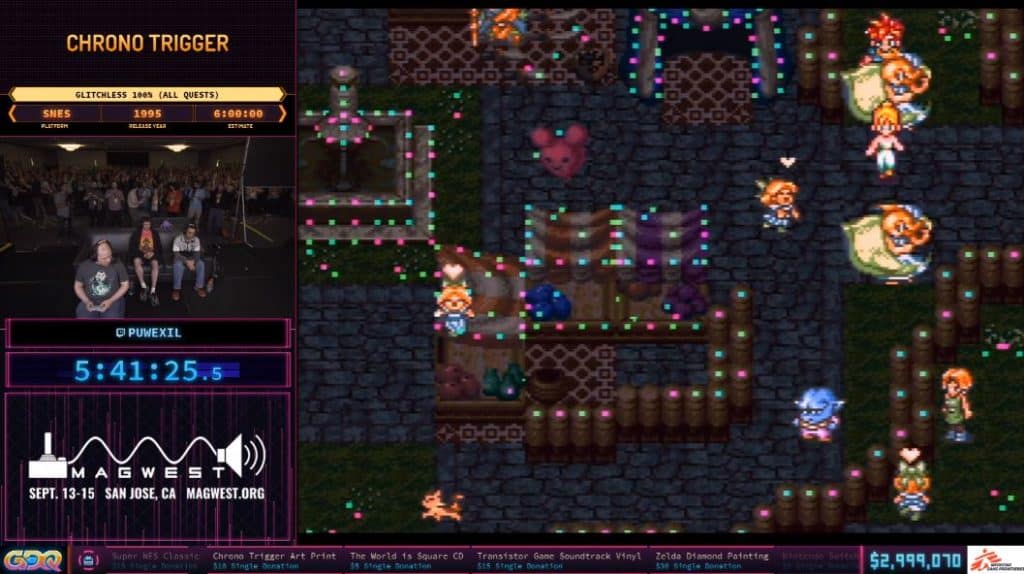 The final tally clocks in at $3,003,889, which is the largest total ever for any of their single events.  If you missed out on any of the awesome runs this SGDQ, you can watch them all on their Twitch channel (as of writing, not all the runs are uploaded just yet).